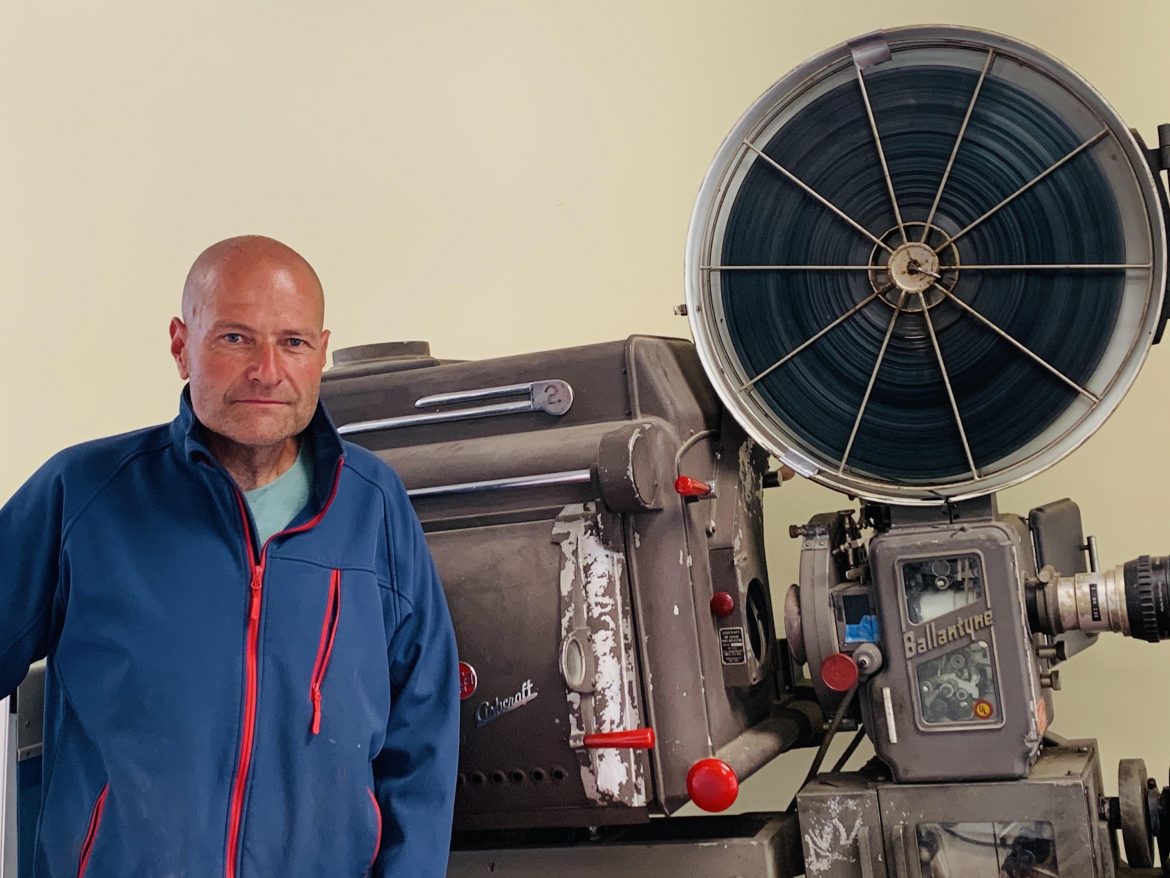 John Tevanian, owner of the Bridgton Twin Drive-In on Route 302, knows the COVID-19 pandemic has been kinder to him and his fellow Maine drive-in theater owners than many other businesses. They were allowed to open on May 1. “I was surprised in late April when the Governor announced that drive-ins could open,” John said.

To John’s further surprise, his drive-in has been very busy because Maine residents are starving for safe, outdoor recreational activities and a night out, any way they can get it. The Bridgton Twin Drive-in and Maine’s other five drive-in theaters are all too happy to accommodate as many patrons as they can. “Since we opened, people are just happy to be here,” John said.

They sold out both screens on Saturday, May 16, and did very well Friday, the evening before, despite the torrential downpours that usually discourage people from heading out to the drive-in, John added. “We can’t get new releases, but people still want to come out to see the old movies now.”

Some of those former blockbusters include films like Jaws, which marked its 45th anniversary this year and was shown in Bridgton on June 19 and June 20. Other classics that people may see this summer include Grease, Raiders of the Lost Ark, and some of last winter’s releases such as Disney’s Sonic the Hedgehog, Terminator Dark Fate, 1917, and Doolittle. John also hopes to get permission from Disney to do a special screening of the Star Wars classic, The Empire Strikes Back, in mid-July.

John, who lives in Naples, said he was only too glad to accommodate the high school graduates so they could have a memorable ceremony. The pandemic prevented high schools statewide from holding their usual traditional Commencement gatherings. The ceremonies were live streamed on the big screens, and diplomas were handed out at the concession stand, he said.

John said the drive-in also hosted four shows with Maine comedian Bob Marley in late May to offer patrons another reason to come here. All four shows were sold out within 48 hours. As socially distanced audience members sat in their vehicles, Marley regaled them with his unique brand of Downeast humor. In addition, Marley performed 12 shows at the Farmington drive-in and four shows at Pride’s Corner, which is owned by John’s brother, Jeff Tevanian. When Jeff opened Pride’s Corner on May 15 and decided to show The Wizard of Oz, he sold out that weekend.

At the Bridgton Twin Drive-In, patrons can choose to bring their own food, or they can safely social distance at concession windows on either side of the snack bar building. One side provides popcorn, candy, and soda, and the other side provides hamburgers, hot dogs, and other hot foods, John explained. As an option, patrons can order their food online and have one person go to the snack bar to pick it up.

The drive-in’s spaces allow parked cars to be six feet apart, which means that John cannot sell as many tickets as he has in the past. Normally, John would be able to accommodate 168 vehicles for one of his screens and up to 251 cars for the other screen. Currently, those numbers have been reduced to 90 and 65 vehicles respectively. John is hoping to add more cars later this summer. The drive-in is usually open every night from Memorial Day Weekend to Labor Day, and then open on weekends until Columbus Day Weekend, John said.

As of this spring, John was charging $15 per vehicle. Patrons can either pay cash at the ticket booth when they enter the drive-in, or they can order via online ticketing. Once they park, patrons can tune into an FM frequency for sound to go with their digital film. The former big drive-in car speakers, which hooked onto patrons’ car windows, were phased out back in 1999, John said.

Everything else is the same for drive-in movie goers who want to reconnect with an experience they cherish from childhood. Back then, it was common for people to pile into wood-paneled station wagons with their mom and dad on a Saturday night or enjoy an affordable date with their high school sweethearts.

The nostalgia factor is huge and attracts a lot of baby boomers, but drive-ins are also attracting plenty of young families who want to create new memories for their kids, John observed. It is this aspect of the drive-in business that keeps John engaged.

Another factor that has helped drive-in theaters surge in popularity is how many people try to recreate the experience with movie screens in the backyards. In recent years, outdoor entertainment venues and public parks have taken to showing movies where people can bring a picnic and lawn chairs. More recently, the pandemic has made some businesses, including move theaters and large retailers in other states, turn their parking lots into drive-in theaters with makeshift screens, to generate business.

For the Tevanian family, owning drive-in theaters in Maine has been a love affair. At times, enthusiastic movie-goers have loved the drive-in back, making it a great business. At other times, depending on the economic conditions at play, people have stayed away, spurning this kind of large outdoor theater. Tevanian recalls that when his father John, Sr., his uncle, and other family members built the Pride’s Corner drive-in in 1953, drive-in theaters enjoyed their heyday in America. At drive-in’s peak in the early 1960s, there were more than 4,000 nationwide.

In 1971, John’s father purchased the Bridgton Twin Drive-In, and John, Jr., remembers working there as a kid all the way through high school. One of his fondest memories was the pure excitement and electricity generated by hot movie releases like the original Star Wars in 1977, when they couldn’t accommodate enough people to meet demand.

When John went to college in Boston in 1986 to study business and finance, he was convinced his time in the family drive-in business would end. By that point, drive-ins were not doing very well. The advent of VCRs had decreased drive-in patrons nationwide, and rising land values led to the sale of drive-ins to developers. “But somehow we managed, and we’re still here.”

John started leasing the Bridgton drive-in from his father in 1996 and bought it outright from him a few years later. He said business actually improved in the 1990s and that made him want to keep on and add a second screen, which he did in 2000 when the former Windham drive-in closed.

Over the last decade, John has painstakingly made all of the needed improvements to keep his business vibrant. He made the switch from 35mm film to digital projection in 2014 so he could continue to show the hottest Hollywood releases. He also built a new concession stand and restrooms. All told, John said he invested $750,000 in the last eight years. “Was I right in making that decision? Yes, absolutely correct.” John said he made this decision even though he knew he might never fully recoup his investment as quickly as he hoped. “I was born in the business and I didn’t want to see it go.”

Besides the Bridgton Twin and Prides Corner, Maine has five other drive-ins located in Saco, Skowhegan, Bangor, Farmington, and Madawaska. Nationwide, there are about 300 drive-ins. With the resurgence the industry is experiencing, that number could steadily grow.

Thanks to drive-in owners like John Tevanian and his family, who are willing to stay the course through good times and bad, Mainers will be able to enjoy many fun nights of movie-watching this summer under the stars.

The Saco Drive In