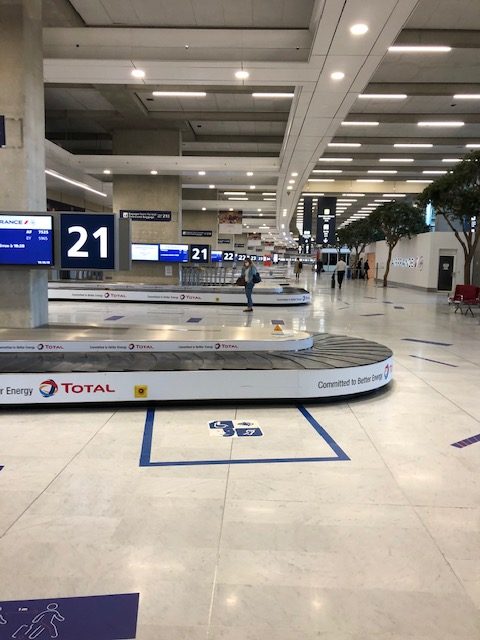 I’m not a believer in omens, but let’s just say that in retrospect an unsettling coincidence happened on our third day in Collioure, the town in southwest France where we planned to spend the winter. We attended a lecture on the plague—I kid you not—which had impacted the area so many centuries ago. Walking home afterwards I missed a curb, fell, and blackened my eye. We told ourselves that we’d have to be more careful for the rest of our stay. How very true that turned out to be.

My husband, a Franco-American Mainer, and I, a French professor, are confirmed Francophiles who have spent protracted stays in France on several occasions. This time, our arrival at Charles de Gaulle airport in mid-January was uneventful, as was the ride on the cheap high-speed Ouigo train headed south. We’d been to Collioure before, so we knew about taking the half-hour bus trip from Perpignan, then walking the familiar route to our rented house. By February we’d met friendly French people at a Catalan luncheon in town and at a chambre d’hôte (“B & B”) on an overnight trip to Céret. We made plans for future get-togethers with the two couples.

Before Mardi Gras rolled around on February 25th, fears were already mounting that a new illness, a coronavirus, would flood into the country by way of Italians crossing the southern border to attend Carnaval in Nice. Little did anyone know at the time that major damage had already been done a week earlier at the opposite end of the country. An international crowd had gathered at an evangelical “super church” in the northeastern city of Mulhouse. Many became infected with the virus and transported it back to their home countries in Africa, Latin America, as well as other locations throughout Europe. But linking this religious gathering to the various multinational outbreaks took twelve days, until February 29th.

Meanwhile for us in Collioure, over 500 miles from the French epicenter, life went on as usual: bi-weekly trips to the outdoor marché, frequent visits to our small supermarket, daily walks through the town and its vineyards, and short bus rides to neighboring cities—sightseeing and enjoying lunch in quaint cafés. During an excursion to Banyuls on March 11th, coincidentally the same date that the World Health Organization (WHO) announced the global pandemic, we began to feel unsafe without either hand sanitizer or face masks. Two days later I approached the seamstress next door to request an adequate number of masks for daily use and on our future travel home when we wouldn’t have access to laundry facilities.

On Saturday, March 14, beautiful weather attracted swarms of people to the cafés lining the port of our small Mediterranean town. Those throngs would disappear for good overnight, once the government announced that all bars, cafés, restaurants, and schools would be closed until further notice. The confinement, as they called it, would entail staying home for 14-day renewable periods, allowing only for essential travel (to the supermarket, doctor’s office, pharmacy, and to work in some cases) or a walk, which was restricted to one’s neighborhood. Every outing required the possession of an attestation printed or handwritten with your name, address, and reason for being outside. Even though we often saw police cars around, in Collioure we were never asked to show the paper.

Then on March 19th the directive came that the U.S. “was suspending all travel from Europe” and that citizens should return immediately or prepare for “an indefinite stay.” Panic set in. Our sons were calling—one encouraging us to “come home now” and the other saying “don’t rush back.” In the end the decision was simple: we couldn’t get out, not safely anyway. The nearest airports were closed. Reduced rail schedules meant longer travel times and risky, overcrowded trains. The nine-hour drive to Paris in a rental car (with no guarantees of food or hotels along the way) didn’t seem feasible.

Thus, we began our eight-and-a-half weeks of isolation. Like many worldwide, our daily activities never varied much. We stayed inside, went out on occasional trips to get groceries, took a daily walk, and watched the televised news at night. Even though the reports were sometimes upsetting, the French corollary to Dr. Fauci, Dr. Damien Mascret, was the informative and often reassuring voice we needed to hear on the nightly national broadcast. As difficult as the experience was, it was also heartening to feel close to our neighbors, some of us clapping on our balconies at night to thank medical workers, knowing that we were united in trying to survive the health crisis together.

Beginning March 26th, I started following the number of hospitalizations, patients in ICU, and deaths at the Perpignan hospital. The first statistics were alarming, rising from 110 to 129 hospitalizations over a five-day period. The mayor of that city, who promptly enforced a curfew to keep people from staying out and partying in the streets, undoubtedly saved lives. By Thursday, April 2nd, the figures started changing for the better. In the following weeks, the number of hospitalized patients declined steadily, from 113 to 85, 47, 26, 16, and 10. Only 5 were still hospitalized by mid-May.

We worried about how we’d ever make it home. All this time we kept asking ourselves, “when should we go home?” and “how can we get there?” Finding a long-distance carrier proved frustrating, since flights kept disappearing from the schedules. Delta’s nonstop from CDG to Boston, for example, hadn’t appeared on the list since late March. For a while Aer Lingus made multiple trips per day from Paris to Dublin, but it was unclear whether as outsiders we’d be allowed to get a room the night before leaving…or indeed if hotels were even open. We looked at itineraries involving Reykjavik, Amsterdam, and Montreal, all to no avail. The only sure bets seemed to be once-daily flights from CDG to LAX or JFK. But with local airports completely shut down, how could we get to Paris? European borders remained closed, so Barcelona was out. Once my husband started tracking departures from Toulouse, he found a consistent 7:45 a.m. flight. Then, miracle of miracles, a second one opened up in the afternoon which would allow us time to make the 2½-hour drive to the airport.

So, on Tuesday, May 19th, we were ready to make our move. Toulouse, being more than double the government-imposed limit of 100 kilometers from our residence, required another of the famous French documents, a déclaration stating the express reason for the trip. Foreigners were allowed to return to their native country, though carrying a copy of that paper was still mandatory…and this one was scrutinized at both French airports. My handwritten paper didn’t seem “official” enough for the local police in Toulouse but in the end, they let me through. After a relatively empty flight to Charles de Gaulle, we spent the night at the one open airport hotel, heading for New York’s JFK and Logan in Boston the next day. The entire process was long and at times exasperating and worrisome, but the airlines took strict and reassuring precautions. The crews on all our flights wore masks, for example, as did the few passengers on board (or they were reminded to do so). Now that we’re safely back home in Maine, quarantined but healthy (knock on wood), we have a new appreciation for Dorothy’s famous saying in The Wizard of Oz, “There’s no place like home.” We made it back and we are so happy we did.

Jayne R. Boisvert holds a Ph.D. in French from the University at Albany, New York. At Russell Sage College she developed courses in the language, its literature, history, and film. An ardent traveler Boisvert has visited many areas of France and the Francophone world over the years. In 2018 her guidebook Pilgrimage to Paris: The Cheapo Snob’s Guide to the City and the Americans Who Lived There was published by Open Books.