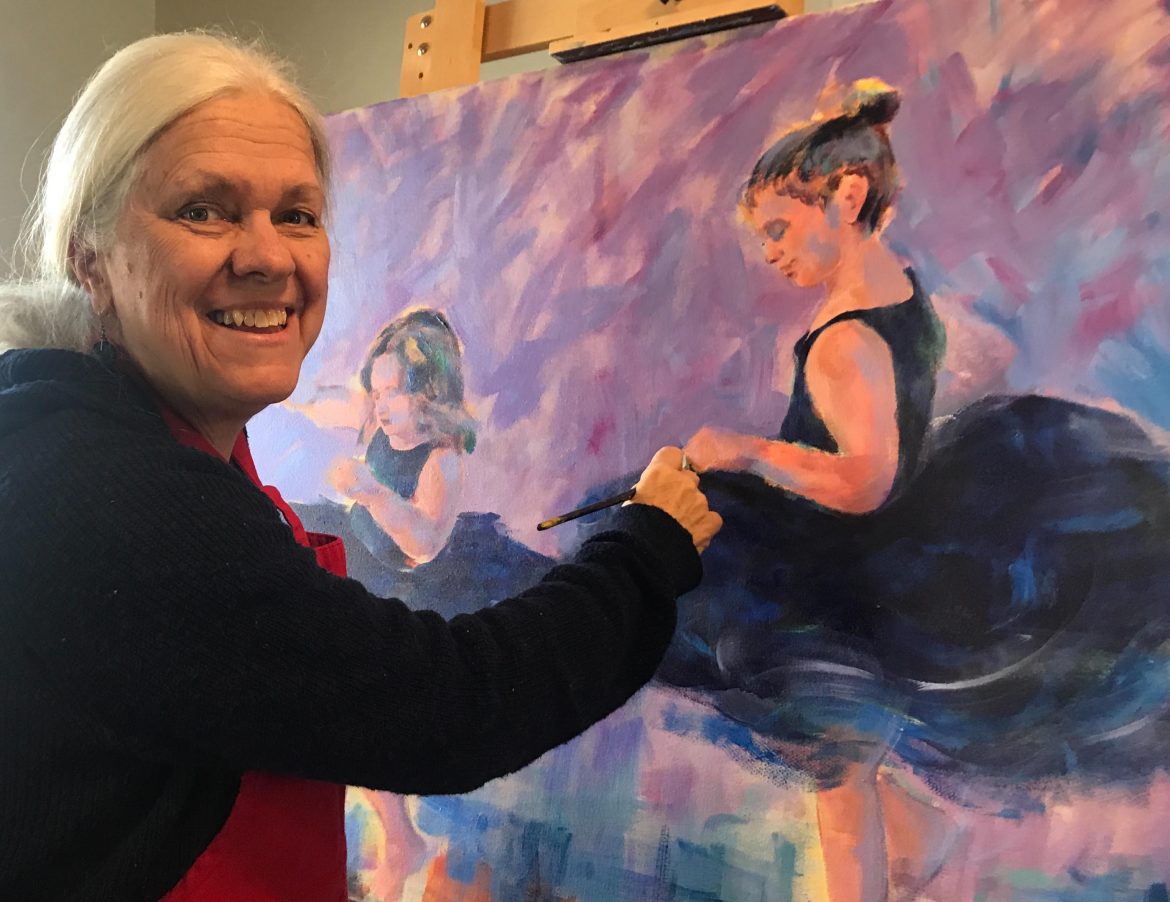 People have been moved by her Dancers, tempted by her Vegetable/Food, and now stand in awe of her hardworking Lobstering Women of Maine. Belfast-based artist Susan Tobey White has been teaching, sharing inspiration, and filling the world with color for more than three decades. White teaches acrylic painting workshops locally and in North Carolina, Georgia, and Florida. She was instrumental in organizing the Belfast Art Walks, created images for multiple North Atlantic Blues Festival and Maine Celtic Festival posters, and in 2009, illustrated Martha’s Vineyard Homeport Cookbook. In 2013, White was one of 18 working artist/educators from around the nation accepted into an intensive workshop for certification into the Golden Artist Colors Education Program. Her works hang in private collections throughout the U.S. and internationally.

“A lot of times, people will ask me who influenced me the most in art, and they expect me to say some famous artist, but really, it’s my grandmother, my mother, the encouragement of my family,” said White, who grew up in northern Connecticut.

“I think every memory I have is of creating something,” she said. An offshoot of her parents’ antique business was that her father excelled at restoring furniture while her mother created hand-painted lampshades. “I was by her side the whole time.”

White’s artistic abilities showed up by age 11, when her father would ask her to copy cartoons. “In high school, I took every class I could with the word ‘art’ in it except for industrial arts, which I wasn’t allowed to take because I was a girl, and the instructor was afraid I’d get my hair caught in the machines,” White scoffed.

White majored in art education at Southern Connecticut State College, but with a glut of teachers in the job market, spent “a lot of time waitressing.” Pottery and clay were her passions during college, as well as weaving on the loom passed down from her grandmother.

White and her husband moved to Maine as part of the back-to-the-land movement in the ʼ70s, purchasing 40 acres in Palermo. They eventually had two daughters and a son.

“We did it all with the homesteading piece,” White recalled, laughing softly. “It wasn’t a huge farm, but we were self-sufficient. We had a couple of sheep. I used to spin wool. I liked that whole process, working so hard and then, in the winter, slowing down.

It was during that time that White took a watercolor workshop at the Farnsworth Museum. “We had two kids at that time, and I was looking for something I could do around children. I just loved it!”

After 12 years at the farm, the family moved to Belfast. “We bought a place with a little bit of land and fixed it up,” she said. By then, White’s husband was purchasing and flipping properties. “I was choosing colors and painting while he was doing the harder work.”

With her youngest in kindergarten, White discovered that the district wanted more arts in the schools. “They had a week-long program where they invited people in, and they invited me,” she said. “That led to me teaching there, which I did for 15 years. And I was always taking workshops. I found that I was just pulled by color. I wanted to continue painting, which was a lot easier to do than weaving and pottery, with so much going on in life with three kids. I had a little studio space in my house, but I was sculpting a lot at that time and also painting, so I was going in a lot of different directions, which is easy to do when you’re trained as an art teacher—you know a little bit about a lot.”

It was an Erika Paden Freeman quote that helped White focus: “Creativity lives at the mercy of self-discipline. Without self-discipline, creativity is just another flight of fancy.”

“That made me realize that I was going in many different directions, but the only way I would ever see success was to focus on one or two areas, which were painting and doll sculpting.”

White attended more workshops, then tried oils before transitioning to acrylics. She also opened her High Street Studio & Gallery, “and that was really a turning point for me. My daughter was in college by then. And I thought, ‘Oh, my goodness, I have a studio, and I have to make money. This is serious stuff!’ One day, I was working on a very detailed watercolor of a blueberry field, and I got frustrated. I thought, ‘What am I doing?’ I was working full-time, and we had another business, a greenhouse/garden center. I thought, ‘I really deserve this space. I’m just going to do what I want to do!’ I turned on some music, hung a large piece of watercolor paper on the wall, and just started painting—and these large women appeared! They were moving, dancing, just . . . free! I would go back and add patterns. I often start my paintings loose and free and then add details. I kept doing these, and then there was an open studio, and whoa, didn’t people react to them! When you paint from the heart, it works. It’s about the passion, I guess. So that’s how my Dancer series began.”

Eventually, White’s husband bought a storefront building in the downtown for rehab and resale. “That space really lent itself to giving lessons,” she said. “My intention was never to have a gallery. I just wanted a place to work and give classes, and that evolved into more gallery than studio. That was huge in terms of my career evolving, exposure, and all the people I met over the years.”

When the time came to sell that building, White moved to her current location, the Susan Tobey White Studio on Church Street. “It isn’t a storefront, so now it’s really just a studio and large enough to teach workshops there. That ended up being a big plus because I could focus,” she said.

Then, during a visit to her husband on the docks (he’s also been a licensed lobsterman for 30 years) one November day, “I saw a woman we knew. She was unloading 50 traps from a boat, and she was working so hard! The light was perfect. I took tons of photos and thought, ‘I need to paint her, paint Suzanna, and I need to do it on a large canvas!”

White was in the middle of working on a series, Party Dresses: Then and Now. “It started with a painting I did from a hand-painted photo my grandmother made of me when I was six or seven on Easter, being dressed up for her and everything looking just so. And that got me to thinking about my granddaughter and how, on holidays, she can wear whatever she wants. I thought, this could be a unique series! I started telling people, and they were sending photos of themselves and their grandchildren, so I became very wrapped up in this series.”

“I’ve never been so obsessed with any series I’ve worked on,” says White. As she worked on painting Suzanna, she said, her mind turned to the limited career options encouraged for young women back in the day: nurse, teacher, secretary. “To see these young women, and some not so young, on their own paths and doing something so much about family and heritage—it’s been fun getting to know these women and pursue this.”

Yet White is also eager to get back to her Party Dress series, and additions to her Food series aren’t out of the question. “That would depend,” she said. “I could go out to the garden and see something growing and be like, ‘Oh, I like those colors!’”

Many of White’s exhibits and teaching sessions over the summer have been canceled due to the coronavirus pandemic. Her work is part of the Choice Art Show at Maine Art Hill in Kennebunk, which will be done virtually—and perhaps by appointment to maintain social distancing at the gallery.

On the upside, White is reconnecting with her homesteading skills. “It’s been kind of fun getting back into bread baking,” she said.

“A good day, to me, means hearing from all my grown kids and grandchildren, having time to paint, and spending time near the water. I enjoy cooking, baking, and gardening—on a much smaller scale than in the past! There was a time when my hands were always busy knitting, drawing, creating somehow. Now more time is spent online doing the business side of my work. The gift of this crisis is slowing us all down and making us assess our priorities. This crisis has made me realize how important friends and community are to me.”