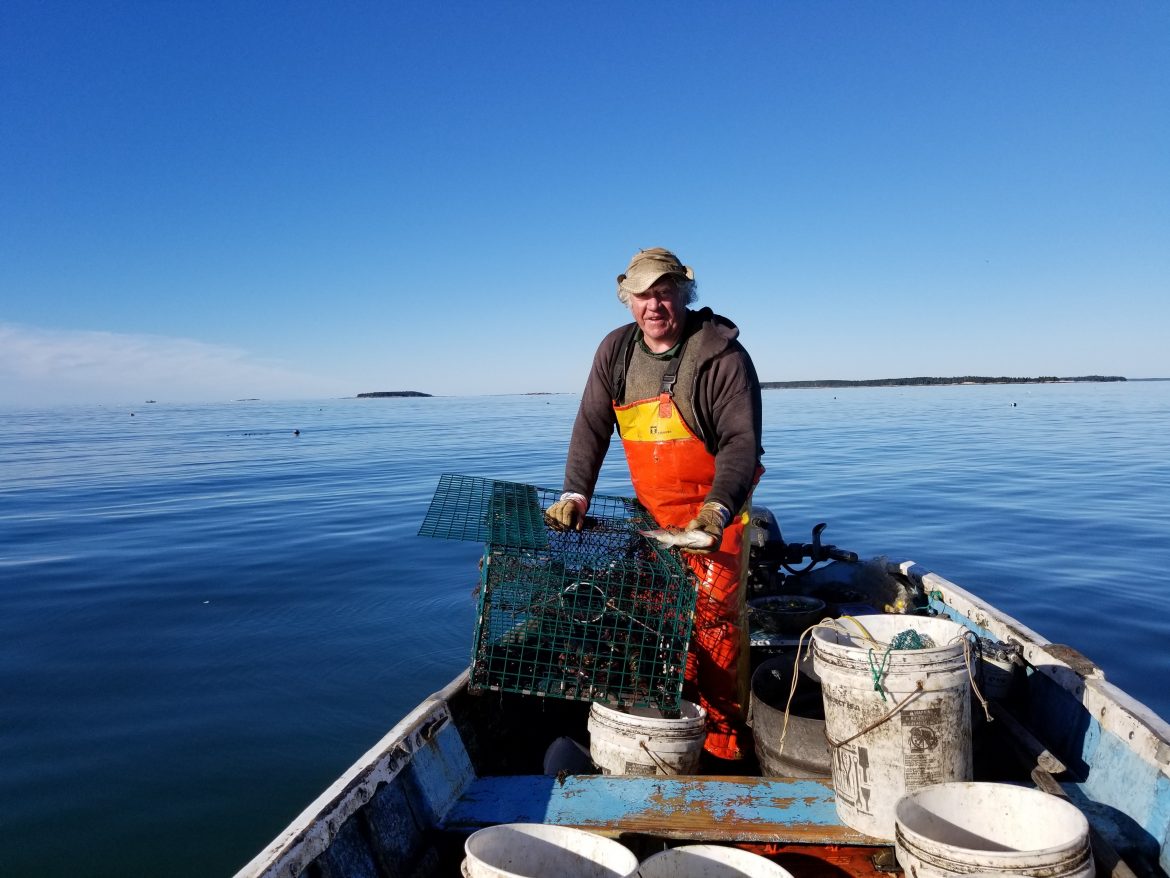 Lobstering is a huge industry in Maine. Last year, according to the Maine Department of Marine Resources (MDMR), 100.7 million pounds of lobster were harvested from the icy waters along the Maine coast. That catch was worth more than $485 million dollars and was the fourth highest in history, according to the MDMR.

A friend of mine, Robert Miller, has been a lobster fisherman for a long time. I used to live in Washington County, a place about as far Downeast as you can go in the United States, and he and his wife Jewell became early-on friends of mine. They landed on Beals Island and have been there for more than 40 years. Robert was pulled to the life of a fisherman and became part of that special league of lobstermen—hand-hauling lobster traps from an open boat.

He sets about 150 traps off his home territory, and there are no winches involved, nothing but his own muscle power. He bought himself a 17-foot pea pod, a boat used originally for purse seining the herring that used to be plentiful along the Maine coast. He christened his vessel the Jewell Dean and set about preparing it for his kind of lobstering. When I caught up with him, I asked him what it was like—spending so much time on a small open boat hand-hauling lobsters.

“I started fishing around 1980,” he said. “I learned how to fish by being a stern man in a neighbor’s boat for about three years.  This man taught me a lot—he was a very good fisherman.” When Robert started fishing, there were still many old timers who hauled traps by hand. “They would fish a gang of about 125 traps in the summer,” he noted. “And, in those days they used wooden lobster traps.” Robert, still strong in his mid-seventies, began his career with the wooden traps as well. “The wire traps didn’t come along until the late 1980s,” he recalled. “The fishermen said the wire traps wouldn’t work or be around long but, they were wrong,” he chuckled. “Now you can’t find anyone who still fishes with a wooden trap!”

The old wooden traps were quite a chore to make, according to Robert. They came in a kit and each trap had to be carefully assembled. Then there was the knitting of the tunnel inside the trap—called a Heading—essentially heading the lobster to the bait bag and certain entrapment. This kind of work was traditionally done in the winter and early spring. “We would hand knit all our headings, and we would also knit the bait bags,” he said.  “One would need about 200 or more.” He was impressed by those burley fishermen sitting in their kitchens with their big boots on as they used their special wooden heading needles to knit heaps of headings and bait bags.

Once that job was complete, they had to load up their new wooden traps with rocks initially, because the wood was so buoyant. When the traps became waterlogged, the rocks would be removed. In addition to the wooden traps, lobstermen carved hundreds of wooden pegs to “peg” the lobster claws. The wooden traps and pegs were eventually replaced—the traps went from wood to metal and the pegs were replaced by elastic bands. “You band their claws to keep the lobsters from chomping on each other,” Robert explained. “They’ll bite each other up.”

Nowadays lobstermen are quick at banding the lobsters—in fact, they used to have 4th of July contests along the coast doing just that. Bait has changed over the years, too. Herring used to be plentiful, but overfishing has changed that situation, and it’s quite expensive. Now, for the most part, lobstermen use a lot of other fish and even pig hide for bait in their bait bags, and nobody makes wooden traps or knits their own headings and bags anymore.

These fishermen planned their work around the life cycle of the lobster, and most of the old timers were shedder fishermen. In the early spring, lobsters stop eating and hide in nooks and crannies while they prepare to shed their outer shells. When they feel safe enough, they come out sometime in June with new soft shells and a ravenous appetite. It is also the time for mating. Male lobsters make nests in the rock crevices to entice the females to visit. And because their shells are still so soft at this point, the females wouldn’t get hurt during courtship. You may have eaten a shedder lobster or two—their new soft shells were quite a bit larger than the meat inside—and you rarely need tools to crack open those softer shells. They cost less, too. Even today, there’s a price difference between the shedders and the hard-shelled lobster.

Many lobstermen today fish in deeper waters. They set their traps more than 200 feet under the sea. “That kind of fishing is a whole different ball game than fishing in close,” Robert observed. “A lot of the guys now fish the deeper waters. They have bigger faster boats and haul hundreds of traps a day, while the shedder fishermen are the ones in shore. They call them the mosquito fleet,” he grinned.

For Robert, bigger is not necessarily better. He figured that doing something differently wasn’t a bad thing. “When they went big, I went small, and when they go deep, I go shallow,” he remarked. “And, in the summer you can do very well sometimes if you go in real close. If you fish by hand with a small boat, you can get in a lot closer to the rocks in the shallow areas where you can place your trap to catch those shedders when they come out.” It’s a different way of fishing, but for Robert it has been rewarding. “With my boat I can get in among the rocks to place my traps,” he said. “And at a low tide I can place my traps much more easily and see down to those little chummy holes the lobsters like. The fishermen in the bigger boats can’t see down as to where to set that trap. They might even end up on a ledge!”

Every lobsterman has buoys of a certain color to mark where the traps are. They have to apply for the colors and have their choices approved by the Marine Wardens. Traditionally each fisherman has his special spots, many of which have been handed down through generations of fishing families. Robert has been fishing long enough to have spots of his own. That doesn’t mean, however, that some lobstermen won’t crowd in on another’s territory. “It’s a jungle out there!” Robert exclaimed. “It’s perfectly legal to set traps right on top of someone else’s. So, I’ve learned how to shift my traps real quickly when someone is chasing me or putting too many traps on top of me.”

Out in the bays surrounding Beals, Robert has learned how to read the waters well. “There are three things you can read on the water—the wind, the swells, and the actual sea—because sea always moves in one direction.” And fog doesn’t bother him. “I still get lost from time to time,” he laughed. “So, I’m glad to have a cell phone!” He loves being on the water, and the end result of his style of fishing has been the kind of lobsters he catches—they are the sweetest I’ve ever tasted. Now that I know a little more about the process of old-fashioned hand hauling, I’m even more appreciative of his delicious crustaceans. For sure, I’m looking forward to tucking into a few from this year’s haul. Thanks, Robert!