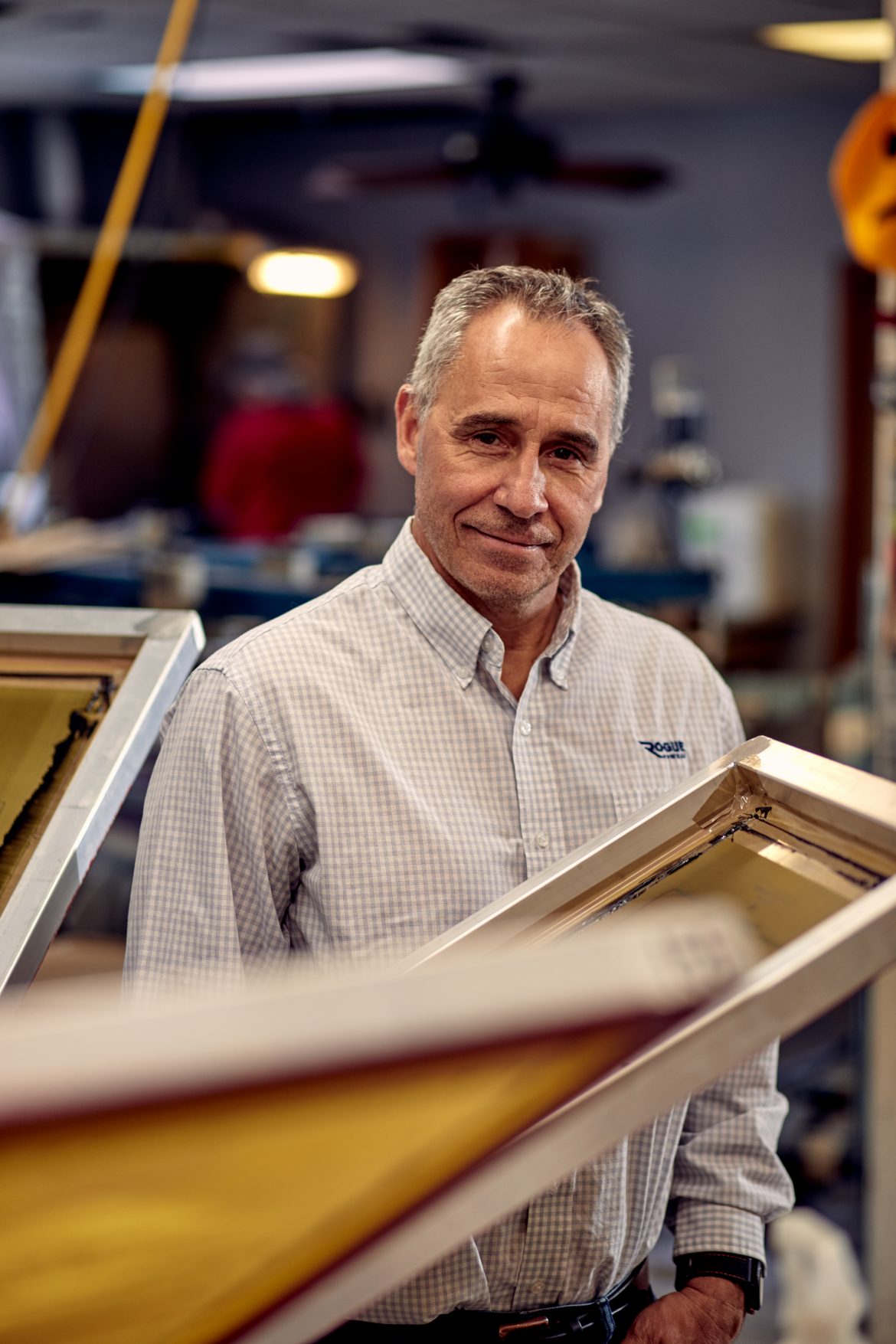 When Governor Janet Mills ordered all non-essential businesses to shutter their doors to stop the spread of the COVID-19 virus here in Maine, Mark Rodriguez keenly felt the impact. Mark, the owner of Rogue Wear in Lewiston, and his marketing assistant Judy Hall were getting ready to showcase their custom-made sports team bags, canvas bags, baseball caps, and other made-in-Maine apparel at the New England Made Trade Show in South Portland. It was the near end of March, just at the time when everything changed.

“Like so many places, you were staring down and wondering how much of a cash flow do we have?” Mark reflected. He had to come up with an alternative and come up with one fast so that he could keep his business afloat and even more importantly, keep his eight full-time stitchers employed.

First Mark decided to have his staff make cloth face masks with the hundreds of yards of cloth he had on hand. Then he was able to receive an essential business designation. “The goal was not to make a ton of money, but also not to lose a lot of money,” Mark said.

By April, Rogue Wear had gotten many more yards of material and produced thousands of cloth marks. These masks have been purchased by individuals, businesses, nursing homes, construction companies, utility line workers, and electricians in Maine and in many other states. His staff has so far created more than 15,000 cloth masks, as demand for this pandemic-related product continues to climb.

The timing was perfect for Mark to recalibrate his screen printing and embroidery shop. “We’re hoping it continues and keeps our people busy.”

Mark, 55, a Lewiston native, is also a community-minded person who wanted to come up with another way to help other businesses throughout the Lewiston-Auburn area. He and Judy Hall called several companies, with the goal of launching a mini-stimulus program for those who were hit especially hard by the sudden economic downtown.

Mark’s idea was to invite companies to provide their logos to his screen printing and embroidery shop so they could make T-shirts and sell them on Rogue Wear’s website as part of a COVID-19 relief effort. For every T-shirt sold for $20, Mark donates $10 to the business involved. After making T-shirts and generating proceeds for 20 businesses in the L-A area, Mark said they are now helping more than 60 businesses throughout the state and growing. Some Portland businesses and restaurants as far away as Cook’s Lobster House on Bailey Island are participating in the program, in addition to many other restaurants that were limited to curbside pick-up this spring.

Mark is also pleased that some businesses are choosing to use some of the proceeds to pay it forward by donating to charitable causes in their community. “We are getting a lot of companies that just want to give back.”

For example, he said Frank’s Bar and Grill in nearby Lisbon donated the $1,500 they received to support the local unified sports team that serves children with special needs at the local school district. As a big supporter of Maine Special Olympics, Mark appreciates this donation a great deal.

In April, Mark said the T-shirt program generated more than $10,000, and all of that money went to the participating businesses. Mark noted that many local restaurants have benefitted the most. “People don’t want to see their favorite restaurant go out of business.”

People realize that when they buy a T-shirt for a Maine restaurant or bar that is listed on the Rogue Wear web site, they are providing funds that will help the servers and bartenders who were displaced by the pandemic. “You are not going out to dinner, but you can tip your server.”

Finding a way to turn what should have been an economic disaster for his family-owned business into an opportunity to help others stay safe and healthy and to help those who are out of work is very rewarding for Mark and his staff. But the values of caring about your community and your neighbors have been part of Mark’s life ever since he first started working with his dad as a 10-year-old boy.

It was 1969 when Lionel Rodriguez decided to buy the former Maine Awards company to make sports trophies for local sports teams in the L-A area. Lionel was a gym teacher who also coached football in Lewiston at the former Montello Junior High School. Maine Awards was soon renamed RodCo.

“Then in the early 1970s, we pretty quickly got into screen printing, and we were one of the first in the area to do this,” Mark recalled. His grandmother and mom also helped add embroidery so they could add lettering to their apparel and to their high school sports team jackets. Canvass and sports team bags were added in 1978 when they purchased a former bag company.

Mark has been married to Debbie for 21 years and has two daughters, Kelsey, 30, and Kirby, 27, along with two grandkids. He earned a business degree from the former Bentley University (now Bentley College) in Waltham, Massachusetts, and returned home to work with his father. “I have been working here since I graduated from college in 1986.” In 2009, Mark took over the family business.

Judy Hall has been working with Mark for a year and half to help him with merchandising and marketing, but they have been good friends ever since they grew up on Lewiston’s Franklin Street near Bates College. She also has the inside story about the origin of the Rogue Wear company name.

Judy said that when they were growing up, “Rogue” was Mark’s nickname. Mark said he often played goalie when he and his friends played ice hockey, and Rogie Vachon was a popular NHL goalie at the time.

After Mark had asked her several times to come work for him, Judy finally relented. One of her many achievements was helping Mark create a merchandising space located near the front entrance so patrons can immediately see their best work. One item that was selling especially well in November and December was a special denim baseball cap to celebrate Maine’s 200th anniversary. “We sold hundreds of them in just a few months.”

Judy explained that before the pandemic took off, Rogue Wear was gearing up to grow the tourism end of the business by creating T-shirts, canvass bags, hats, and other apparel for Maine’s resorts, campgrounds, and tourist attractions. It is an area where they experienced some good growth in the fourth quarter of 2019.

Some of Mark’s current clients include the U.S. Air Force, Maine Special Olympics, Bath Iron Works, and the Dempsey Challenge.

As Rogue Wear waits for the state’s tourism industry to fully open up this summer, Mark is keeping his fingers crossed that his cloth mask business will continue to sustain his company. “As good as this feels that we are keeping busy, my thought is what’s next?”

While it is so difficult to answer that question, at least Mark knows that his Lewiston company continues to make a difference in fellow Mainers’ lives during a difficult time. As is often the case, such times often bring out the best in people, and Mark Rodriguez is one of those people.