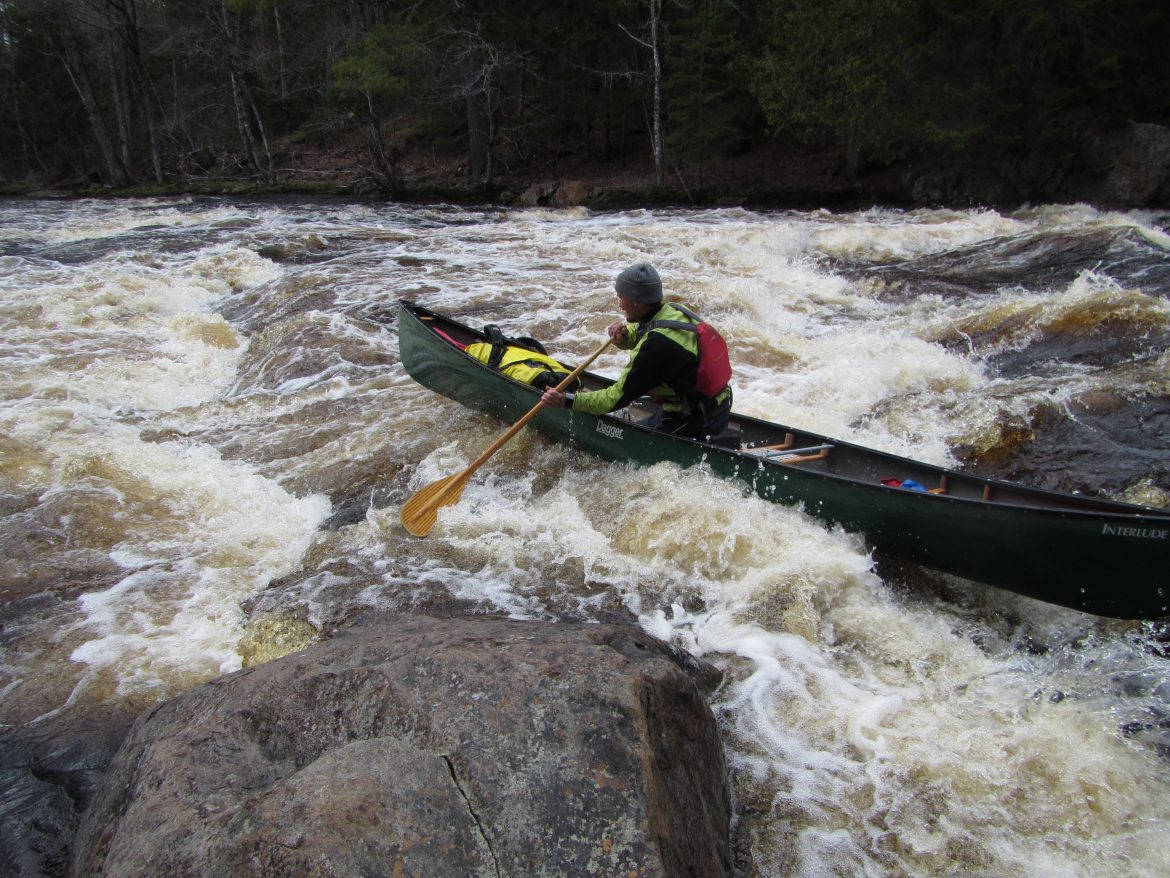 Forget the St. John, Allagash, or Moose Rivers. As far as I’m concerned, the Machias River is the best canoe trip in Maine. A free-flowing river with a large watershed, it begins in the lakes region of northern Washington County and then tumbles for 80 miles to the sea in the coastal community of Machias.

Meaning “bad little falls” in Passamaquoddy, the Machias has virtually everything for the adventurous paddler. Narrow, scenic whitewater streams connect five medium-to-small lakes in the upper reaches of the river. A few miles after leaving the last downriver lake, First Machias, it joins the West Branch and becomes a more substantial body of water. Beginning with Long Falls between Third and Second Machias Lakes, there are at least eight Class III rapids. Some become more difficult in high water. Depending on water levels and paddling skills, a few may need to be portaged. Most consider spectacular Class V Holmes Falls to be a mandatory carry.

Numerous access points on the Machias offer a unique feature for a canoe camping river, allowing for a multitude of tripping options from single day adventures to week-long journeys. While paddling the entire river is always my first preference, a favorite shorter version is a 30-mile sector from Third Machias Lake to the top of Holmes Falls.

My tumultuous affair with the Machias began in the late 1970s, when my wife Nancy and I completed an overnight trip from Third Machias Lake to Airline Rapids just below Route 9. Lacking wetsuits, we paddled in jeans which were desperately discarded for dry replacements the moment we were off the river. In the ensuing 40 years, I’ve completed about 30 trips on the Machias having recruited a multitude of victims. Some of them have remained friends.

During a trip in April 1984, a protracted swim on Long Falls resulted in a badly damaged canoe, followed by a night tenting in the snow. The following spring, my brother-in-law and I became seriously hypothermic after swimming Third Wigwam Pitch in a snowstorm. In order to avoid the 1986 trip, he broke his ankle. He once remarked, “I do the Machias River with Ron every other year. It takes me two years to recover.”

In April 1989, the late Terry Tzovarrus and I began an expedition at the outlet of Fifth Machias Lake in heavy rain. With the exception of one sunny morning, it rained the entire trip. We were thoroughly water-logged when finishing in the village of Machias several days later. Occasionally, the weather cooperates on the Machias, resulting in some of my finest outdoor experiences.

Hope springs eternal. When my friend Rick Farnsworth invited me to join him and two companions on an early May Machias trip, I enthusiastically signed on. Monitoring water levels, watching weather forecasts, and determining road access became the subject of multiple e-mails. The Maine Bureau of Public Lands confirmed roads to the upper lakes region were passable, so our initial plan was a three-day trip from Fifth Lake to Airline Rapids. Another obstacle this year was planning adequate measures to prevent spread of the coronavirus. Using masks, planned separation, and sanitizing, we were able to address that challenging dilemma. A concession to my aging arthritic knees, I would be paddling an expedition kayak for the first time.

Plans changed when running our shuttle, as a private landowner had gated the access to Fifth Machias Lake. Quickly adapting, we completed a shuttle for an excursion from Third Lake to Holmes Falls.

The weather cooperated from the outset with sunny skies and the rarest of all weather phenomena, a tailwind. Water levels were excellent navigating through Class II rapids between Third and Second Lakes. River wide strainers required carrying a short section of Long Falls. Afterwards, the gusty tailwind propelled us through Second and First Lakes to a campsite at the outlet of First Lake.

Up early the following morning, more sunshine greeted us. After some flat-water paddling, consequential Carrick Rips was scouted and successfully negotiated. More entertaining whitewater preceded rollicking descents of Airline Rapids and Little Falls, where we stopped at the most picturesque campsite on the river.

Although light rain fell during the night, skies were clearing by morning. The exhilarating culmination of our final day was paddling the Wigwams, four challenging rapids in a two-mile sector. Good weather, perfect water levels, and no blackflies—it doesn’t get any better than that on the Machias.