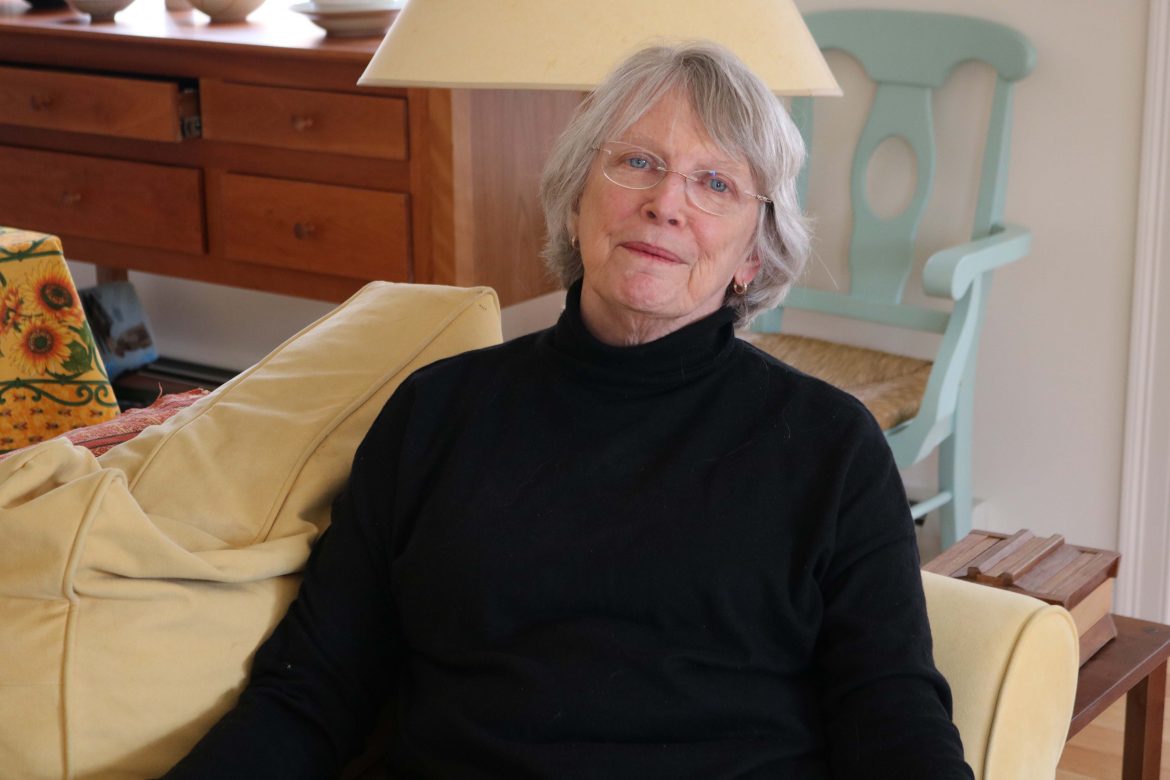 I arrive at Lois Lowry’s home in Southern Maine on a Friday at the end of February. It is a bright and sunny day. The winter weather has begun to turn toward spring, though Maine has a few more snowstorms in store for us in March and April.

I knock on the door, and Lois invites me inside. Her 14-year-old white Tibetan Terrier, Alfie, greets me while Lois gets coffee from the kitchen. “There are not too many dogs of his breed around,” Lois says. “He’s very old and completely deaf,” she adds.

The sitting room is tastefully decorated with earth-tones and flower prints. Family photographs crowd a side table. Armchairs and couches circle a small coffee table. A dining table with a colorful sunflower print tablecloth is against the back wall. The chairs around the dining table are a matching design in varying solid pastels—blue, yellow, pink. Behind it a bookcase is bursting with books.

Lois returns from the kitchen with her coffee. She is quiet and unassuming, with gray hair and spectacles. She wears a black shirt and checked pants. We sit on a yellow couch with Alfie in between us.

Lois Lowry is the best-selling and award-winning author of many young adult books. Her books include The Giver and Number the Stars, both of which are frequently taught as part of school curriculum. Four of her books have been turned into movies. The Giver movie, released in theaters in 2014, starred the likes of Jeff Bridges, Meryl Streep, Katie Holmes, and Taylor Swift.

Lois tells me she didn’t have anything to do with the filming, but she was invited to South Africa to watch part of it. “They were very nice to me,” she says. During her time on set, she struck up a friendship with Jeff Bridges. She tells me they still email each other and shows me some of the photos he has sent to her.

Her most recent book to hit the big screen (or small screen) is The Willoughbys. This animated film was released on Netflix in April, and features the voices of Will Forte, Maya Rudolph, Martin Short and Ricky Gervais.

While Lois has mixed feelings about how movie directors have adapted her work, she says she has a way of coming to terms with it. “I have to keep reminding myself, and I’ve done this each time a book has been made into a movie, that the book still exists. It’s a separate thing. I’m not going to let myself get bent out of shape about it.”

Lois has lived in Maine several times through her life. In the 70s she lived in Falmouth because her husband was working at a law firm in Portland. She tells me that her children attended Falmouth schools.

During that time, she was writing for magazines. She tells me about one article she wrote during that time about the Old Port. “Portland was just beginning to emerge from quite a gray disparaging city,” she says. “It was a very desolate, grim place. It’s wonderful to see it thrive now.” She tells me she has noticed Portland is now very trendy, and she worries it will become “too much so.”

Once her marriage ended, Lois moved to Boston and met Martin. Martin was her “spouse equivalent” for many years until his death in 2011. Lois moved back to Maine in 2013 to the retirement community where she currently lives. This is not her only home, and she laughs as she tells me she has “too much real estate.”

When I ask her why she continues to return to Maine, she smiles. “It made sense to move to Maine,” she tells me. She has friends and family here. Her son Benjamin lives in Portland. Lois tells me he lives in a good location, because “he can walk to everything.”

Just like any other proud grandmother, Lois tells me about her grandchildren. “They are all doing very well and making me very proud of each of them,” she says. She tells me she is having dinner with one grandson tomorrow. Her grandson Rhys is currently attending school at the University of Maine at Orono. He is studying computer engineering. Rhys sends her text messages while we talk, and Lois reads them to me as she receives them. Her oldest grandchild is 35 and married. Lois tells me he is working in Vermont and is about to go back to school for his MBA from Michigan State. Another grandson, Grey, named after Lois’ son who passed away in 1995, graduated from Falmouth high school and is currently living and working in Bath.

I ask Lois if she is willing to discuss Grey. She has talked about him publicly before. She says “yes,” and points to another photograph. “There he is with his wife and baby there,” she says. Grey was in the military when he passed away in a plane crash. Lois was living in Cambridge, Massachusetts at the time. She reflects that she received “batches of mail from everybody I had ever known.” One of the ones that she says was most important to her was from a professor of theater. “All he said was a note with a quotation from Macbeth.”

Lois tells me the quote is from when Macduff’s wife and children have been killed. She looks up the quote on Google to ensure she gets it right. “Give sorrow words; the grief that does not speak knits up the overwrought heart and bids it break.”

She says the quote really stuck with her. “What happens when somebody has a tragedy in their lives is that people don’t know what to say. And so they don’t say anything.” Or, she says, they change the subject. “Every time that happened to me, if I mentioned Grey’s name and they quickly changed the subject . . . it was like he was killed again.” So, Lois says she always welcomes the opportunity to speak about Grey.

Grey’s daughter has just completed her master’s degree and is living in Germany. She tells me how proud Grey would have been of the person she has become.

Her current “spouse equivalent” Howard lives in Florida most of the time. He is a doctor. Lois tells me that when they are apart, they read the same books and discuss them together. It seems an incredibly romantic and appropriate way for an accomplished author to keep in touch with her partner.

While attending graduate school at the University of Southern Maine, Lois studied photography in addition to literature. She tells me she became quite interested in photography. She specialized in portraits of children, which she described as “something I loved doing…the combination of children and photography.” Some of her books even use her photographs as book covers.

Number the Stars features a portrait Lois was hired to do. She remembers the child well, though she says it was many years before she published the book. “That family was Swedish, and that child is so Scandinavian in appearance,” she tells me. “She now has four grown children of her own.” When the publisher asked Lois what her idea was for the jacket of the book, she showed them that photograph. She expected the publisher to hire an artist to create a drawing of the portrait. “They said ‘Let’s use the photograph. Can you get permission?’ So, I called the parents, and they laughed and said I had to call her, because she was over 18. So, I called and got permission.”

The cover of The Giver is another portrait Lois took, this one for Down East Magazine. She tells me she also took the portraits on her books Gathering Blue and Messenger, which are sequels to The Giver.

Nowadays, Lois tells me she still enjoys taking photographs, though she no longer has a darkroom. She mentions she misses the experience of a darkroom. Now she uses her iPad 11 Pro to take her photos. “It takes incredible photographs,” she says. She shows me some of her photographs she has taken, and they are, of course, extraordinary.