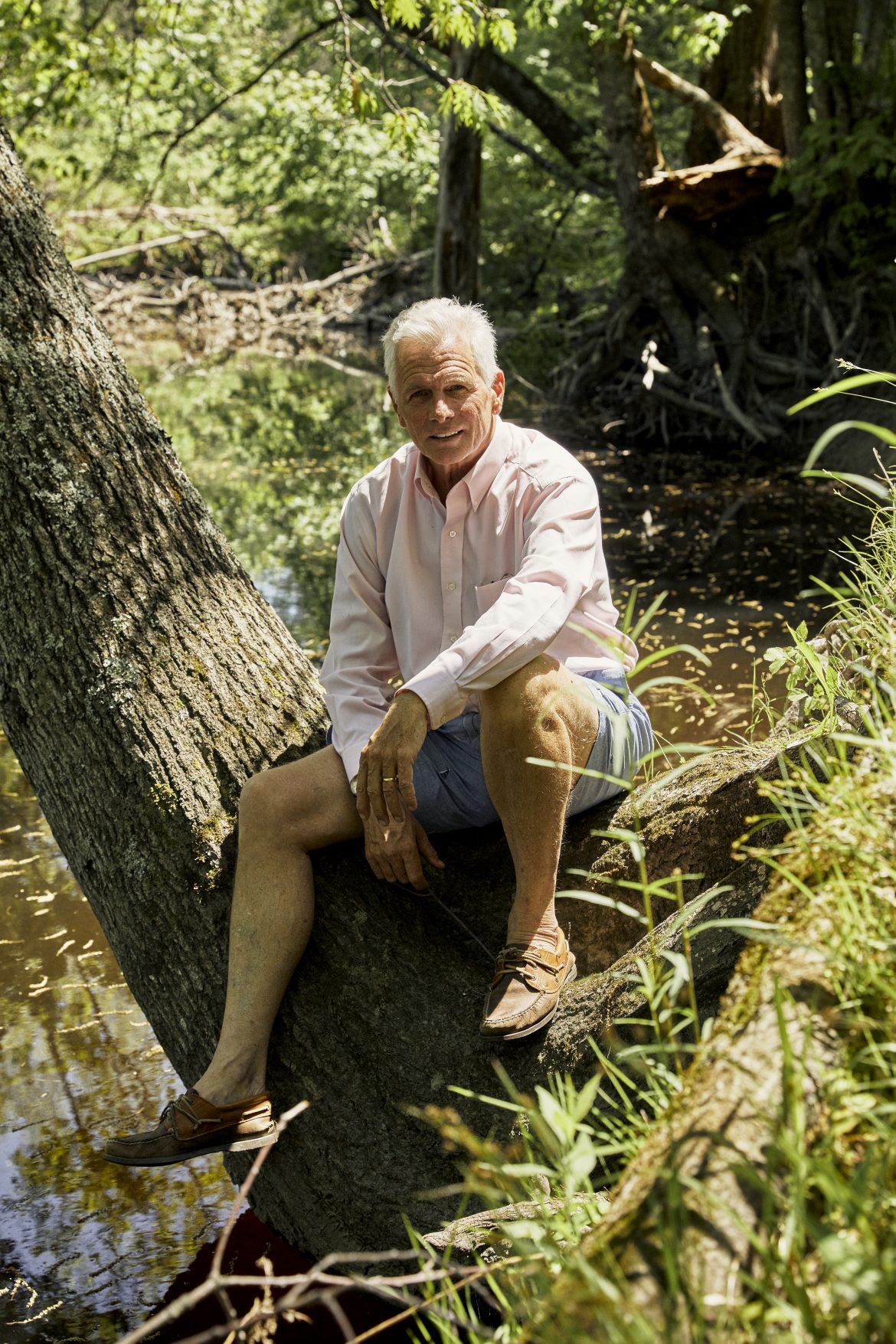 Mysteries set in Maine, in a pre-cell phone era

James H.K. Bruner has enjoyed a great career with his law practice, raised his six children with his wife, Gretchen, and spends his winters in Florida and his summers in the Kennebunks, knowing the best of both worlds.

But five years ago, the 62-year-old attorney decided that he needed to branch out in a new direction. He wanted to create something that he could leave for his children, grandchildren, and posterity. That creation turned out to be Digger Davenport, the hero of the “Bike Cop” trilogy of novels that Bruner wrote, calling on his childhood memories of spending summers with his family in Kennebunkport.

He has a wealth of memories to draw upon. James’ father was the Rector at St. Ann’s Episcopal Church located on Kennebunkport’s Ocean Avenue for 30 years beginning in 1964. James recalls that his family lived in the rectory adjacent to St. Ann’s in the Cape Arundel section of Kennebunkport for 20 years.

When James decided to write about his childhood and recapture the Kennebunkport he knew during the 1960s and 1970s, he said the first chapter opened with him riding his bicycle downtown to go fishing. But he abandoned the autobiography in favor of fiction and decided to create the Bike Cop, a college student who lands a job handing out parking tickets and somehow finds himself in the middle of some compelling mysteries in the summer seaside resort town of Port Talbot, Maine.

“I got to the end of [that other] chapter one, and I realized that I don’t even like fishing. It wasn’t interesting enough or entertaining enough,” James said. As a natural storyteller who frequently told his kids continuing bedtime stories that he made up from his imagination, James realized that creating a fictional world drawn from his childhood would be much more satisfying. “Then it took off from there.”

He views Digger as the type of hero whom young people can relate and look up to. James combined his childhood memories of the people and places he knew in The Port with the skills he has acquired during a lengthy legal career. As a result, his novels’ main character has the ability to solve mysteries via his natural curiosity and desire to see justice done. The world of Port Talbot, Maine, where the novels take place, mirrors Kennebunkport in some ways. Both are seaside villages where local year-round residents coexist with summer people.

James’ novels give his audience a chance to remember an era that did not include smart phones, the Internet, and Social Media. From the vantage point of Digger’s bicycle, the reader gets to revel in the place and time that James cherishes and wants to preserve for future generations.

It took James about three years to write his first book, The Bike Cop in The Greater Weight of Evidence. In this novel, Digger Davenport gets involved in the brutal murder of a waitress from the Brigantine Hotel where a Black bellhop is framed and indicted. In a race against time, Digger must find the exonerating evidence before the wheels of justice put an innocent man behind bars.

James recalls that his first book received a very warm reception throughout the Kennebunks and received the endorsement of John Martin, the general manager of The Colony Hotel, which is pictured on the book’s cover. Copies of The Bike Cop were sold in The Colony Hotel and several bookstores throughout the region as well as on Amazon.

In 2019, James penned the second book, The Bike Cop in Son over the Yardarm. In this novel, Digger returns to Port Talbot for his second summer as a parking cop. But instead of directing tourists, Digger gets caught up in the Abenaki curse that hounds a blue-blood family to death and threatens the remaining heir of the infamous oceanfront estate. Digger is assisted by his new girlfriend and sailing instructor, Kristy Riggins, and together they find a way to help the embattled family.

James published the trilogy’s final book, The Bike Cop in Dog Island Light, in the summer of 2020. (The cover strongly resembles Goat Island Light near Cape Porpoise.) In this novel, Digger has just completed his Junior year as a Criminal Justice major in New York City and returns to the Port Talbot Police Department. Shortly into a very eventful summer, Digger gets tied up in a madman’s search for his family’s share of an inheritance that dates back to the Civil War.

This latest book has garnered some favorable reviews. Dorothy Walker Bush Koch, a New York Times bestselling author and co-chair of the Barbara Bush Foundation for Literacy, had this to say:

“Digger and Kristy are back in the Port again, encountering evil and intrigue. What is so fun about James’s series, besides the sheer excitement, is being able to pause from reading and see our community of yesteryear at the center of the action. It allows those who love Maine to really connect with James’ fantastic stories.”

“In this the third and by far the best of his “bike cop” series, James Bruner reveals a dazzling versatility and command of multiple genres—from a fascinating historical novel set in Savannah on the eve of the Civil War, to a remarkable storm-at-sea sequence that rivals the best of Moby Dick (but without the whale). He even creates a villain worthy of a Stephen King novel . . . Terrific entertainment!”

For James, writing these three novels has been a labor of love that has given him the new direction he sought. “There is no finer method to lift your spirits than writing a novel and going into a fictitious world where you can control the winners and losers and what is happening in their lives.”

Before he authored the “Bike Cop” trilogy, James built a successful law practice here in Maine, Florida, and New York. He has been a practicing attorney since 1983 and handles what he calls “door law—whatever comes through the door.”

Lately, he does a great deal of estate work and helps seniors navigate Medicare and Medicaid rules and regulations. In 2015, James seriously considered running for political office for State Assembly in New York but decided against it. He wanted something more.

“We search for significance in a way,” James observed. “You see the light at the end of the tunnel a little bit, and you ask yourself what has my existence been about on this earth?” Writing his novels proved to be very satisfying for James. “I want to make a lasting impression in this world before the Lord call me.”

As a lawyer, James said he has always been a wordsmith and a political animal who can argue in favor or the left or the right with equal relish. His gift for storytelling enables him to entertain people and leave something lasting.

“The Bike Cop” trilogy is available through Ingram, Amazon, and Pathway Distributors. They are also sold in 30 retail stores in southern Maine and in Portsmouth, New Hampshire, and are available digitally.