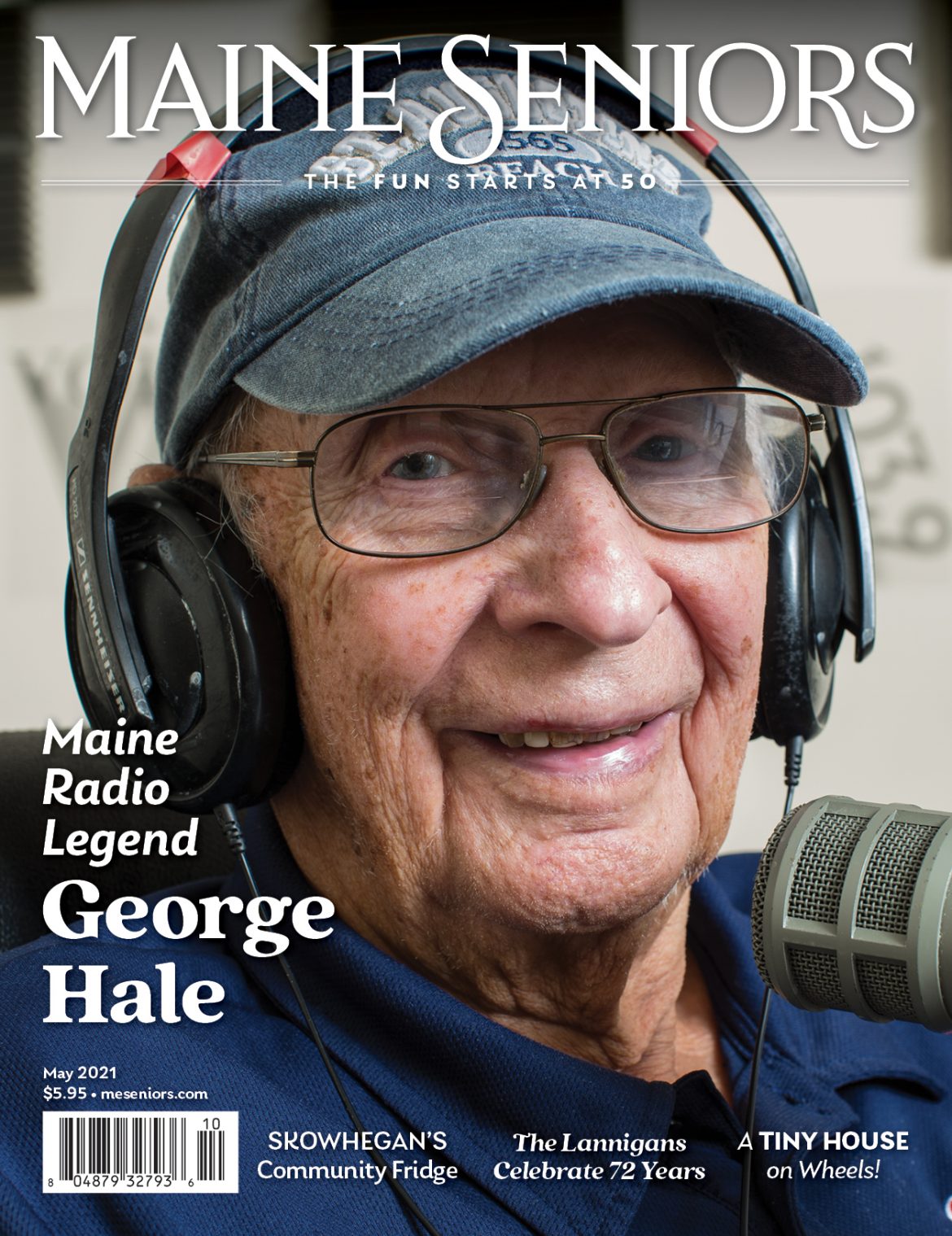 As soon as he returned home from Florida this spring, George Hale couldn’t wait to get back on the air with his co-host Ric Tyler at WVOM, 103.9 FM.

At 89, George can’t see himself doing anything else. With more than 60 years of entertaining Maine radio listeners and television audiences, George is a broadcasting legend with a loyal following. Monday through Friday from 5 a.m. to 9 a.m., George and Ric talk all things Maine via their Bangor station and sister stations in August and Rockland.

Like it or not, they also talk their share of politics based on what their listeners want to dive into. With the help of contributors like Brent Littlefield, Jon Wadsworth, and Howie Carr, their radio audience has plenty of options to air their views. Conversation touches on predicted subjects, like wearing face masks and the vaccine roll out, and off-the wall topics, like whether Aroostook County should secede from the rest of Maine.

“We do have our share of interesting calls,” George said. “We try to be balanced. If we have somebody who is on a tear about one thing or another, we try to get the other side.”

“We get a very large response from Houlton to Lewiston-Auburn, Augusta, Waterville, and up and down the coast to and to Bangor,” said George, who was formally the voice of University of Maine Black Bears football, basketball, and baseball for years.

George’s journey to Bangor, Maine, started in Cleveland, Ohio, where he was born.  He moved with his family to New York City during the Great Depression and grew up in Jacksonville, Florida.

George recalled that he had a love for broadcasting from an early age. When he was a kid in Florida, he used to sit in the yard and make believe he was broadcasting different events with his vivid imagination. His parents made him a microphone out of a broomstick.

George later attended broadcasting school after attending college for a few years. He had served as a Navy medic during the Korean War right out of high school, and while he was stationed in Texas, he and his brother, Robert, decided to do some broadcasting at the base hospital.

“There were only three things in my life I ever wanted to do. I wanted to either be an airplane pilot, or do something in the medical field, or be a sportswriter or sports broadcaster. And I ended up doing all three,” George observed.

After he left the service, George began working in New Jersey at a radio station. He wanted to break into television in New York during the 1950s, when the TV industry was growing like crazy nationwide.

“Those who I knew in New York who were my mentors said you need to get some TV experience and come back,” George said.

He found out there was a relatively new TV station that had gone on the air in Bangor, WAVI-TV. He called the station, and they invited him to come up and audition. He drove all the way from the Big Apple to Bangor in his old Chevy.

“They hired me on the spot,” he recalled.

When he told his family, they asked, “Where is that? How far north is that?” George replied, “I don’t know, but it’s pretty damn far north.”

In Bangor, his job and his roles grew with time.  In the beginning on the radio, he did some morning news, and after a while, he did it every day of the week. Eventually, he did the TV news broadcast and just about everything else.

“In those days, things were pretty basic,” George said.

Later on, when the morning radio people had an opening, George transitioned to the morning radio show, and “I did that for than 50 years,” George said. “I also did television at the same time. I loved everything I did.”

He remembers his boss was concerned that he spent too much time at the station.

“This is what we did.” As radio and TV pioneers.

George did whatever they gave him—the weather, religious shows, news, interviews, and commercials.

“That [variety] made us better than the broadcasting people who are doing it now,” George explained. “It’s different today because everything is computerized. There really aren’t that many jobs anymore. Years ago, every town had to run with a radio station. Some doctor owned a station in the back of his house or some merchant.”

Today there is satellite radio and podcasts where people can have their own stations on the Internet.

“It used to be when I went in to do the morning radio show, people would have their radios on to hear what the latest news was or what the latest weather was,” George said. “Now when they turn on the radio, they already know. Sometimes I am the last one to know. It’s a challenge for me and every broadcaster really. The audience knows as much as you know, in terms of basic information. If a celebrity dies, it’s instantly on the network.”

Fast forward to 2021, and George is proud of how well he and Ric complement one another. Ric does a lot of heavy lifting in terms of the planning and the work. George does a lot of reading—it’s research to the tune of 10 news sources per day to help put together a show. “When I come to work in the morning, I am ready for that mic to come on.”

George has also imparted important lesson to his co-host.

George often tells Ric he has reinvented himself five times. “As the business changed, I knew I wanted to stay in the business, and I had to change.”

George believes his wealth of media broadcasting and newspaper experience has helped him evolve as his industry has changed over the decades. “Every time a new job was thrown my way, I not only could do it, I wanted to do it.”

He has never viewed himself as a disc jockey, but as an on-air radio personality who plays music. “If you stay on the air long enough, people will say he must be good.”

Some people, including his kids, will ask George why he is still working at his age.

“The idea of retiring occasionally crosses my mind, and immediately I tell myself, stop thinking about that, you’re stupid. Sooner or later, it will happen, but I go back to those three basis things,” George added.

Part of his formula for success revolves around humility.

“Don’t get impressed with yourself,” is what George reminds himself. “The only difference between George Hale and audience is that I have a microphone. It doesn’t make me smarter, more talented, or intelligent. It only means I have a large microphone; they don’t.  You never talk down to the audience, never do that.”

In addition to his broadcasting career, George has had a big impact on Maine in other ways. He served as chairman of the Maine Harness Commission for more than 20 years and as the first chairman of the Maine Gambling Control Board. In that role, he helped put the first gambling casino in his adopted city of Bangor, Hollywood Slots.  He was appointed to those posts by three Maine governors.

George is also a family man who has been married twice. His second wife passed away after 33 years of marriage. He also has three children. A fourth child, a daughter, passed away some time ago.

Throughout his career, George said his peers have tried to label him as one type of broadcaster or another. “It’s very hard to pigeonhole me.”

Even when he has been given a slew of Maine and New England broadcasting awards, George does not feel they truly reflect what he is all about.

George joked he is glad that he is still behind the microphone. “I went into the boss’ office last Monday, and he didn’t fire me.”

In addition to a changing world and industry, George has also overcome his share of health problems. He goes to the gym as much as he can to stay fit.

“I have broken about everything in my body from some of my activities. I was a runner for much of my life,” George said.

He has had heart bypass surgery and had one-third of his pancreas removed before it became cancerous. That caused him to be hospitalized for several months, but he recovered. “I was lucky. Something will get me.”

Having something to do that he loves and taking care of himself both continue to pay big dividends in his golden years. He tries to eat no more than two meals a day. “I don’t drink or smoke, except for two beers a year in Florida,” he joked. “I once weighed 230 pounds. I weigh 167 pounds now.”

“What you don’t want to do is stop. If you stop, Mother Nature’s is going to make you pay.”