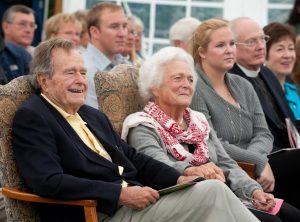 Baseball is making a welcome comeback, as Maine and the rest of the nation gradually move from the COVID era to the new normal. The pandemic had led to an abbreviated Major League Baseball season in 2020, one that didn’t get underway until the end of July and that saw teams playing in empty stadiums until the World Series concluded in early November. But the National Pastime has returned, a rite of spring and a sign of hope.

Scores of kids are getting ready for Little League games in cities and towns from Fort Kent to Kittery. The Boston Red Sox are well launched into their 2021 season, after an Opening Day at Fenway Park in April. And later this summer, the Portland Sea Dogs hope to invite fans back to Hadlock Field as well.

Baseball has always enjoyed a great following in Maine, from its earliest days in the late nineteenth century to the present. In Kennebunkport, baseball enjoys an especially rich history, intertwined with the legacy of the Bush family, which has summered at Walker’s Point for generations. In fact, in the summer of 1947, a summer resident named George H.W. Bush flashed his leather and showcased his bat here, when he wasn’t playing first base for Yale University. 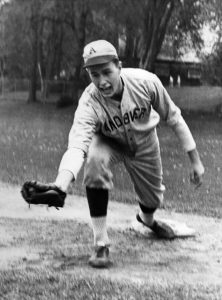 Bush played two summers, 1946–1947, with the Collegians, his family’s town league that attracted fans from all over Southern Maine.

Bush’s father, United States Senator Prescott Walker Bush of Connecticut, started the team in 1926–1927 when Bush’s brother, G. H. Walker, Jr., was the catcher on the Yale team. G.H. Walker put a squad together made up of no fewer than seven college team captains. Then he hired the legendary “Colby Jack” Coombs, who was coach of the Duke University team from 1929–1952. He even hired the Yale groundskeeper to shape up Parsons Field for summer play.

Fast-forward 20 years to 1947, with the revived Kennebunkport Collegians team now consisting of members of the Walker-Bush clan. Uncle Lou stood on the mound. Herbie Walker’s son, Ray, was at second base and other son, Bert, was in center field. George Bush was at first, and Johnny was behind him in right field.

The first game of the ‘47 Bunk-Port series was played on Saturday, August 2, before a crowd of 300 at Kennebunk’s Park Street Playground (Parsons Field). Billed as a pitcher’s duel between two high school aces, Dick Oldham, of Wells (for the Advertisers), and Ted Behan of New Haven, Connecticut (for the Collegians), the game ended in a 4-3 victory for the Kennebunk home team.

A crowd of 400 turned out for the Labor Day game. The Advertisers had a big lead in the seventh when the townies scored six runs with George Cousens leading the charge. As it happened, “Big George” had made a bet with some fans that he could hit one out and, with the count one-and-one, and the bases loaded, he made good on his promise. He drove Lou Walker’s third pitch through the trees in deep center to the McAlister lawn for a grand slam. When the Advertisers scored four more runs in the eighth, some spectators began to leave, but in the top of the ninth the Collegians mounted a rally of their own, which quickly brought the score to 11-8.

It was a tense game. It came down to two out, three on, in the ninth inning. Ray Walker came to bat and popped one up to Joe Kearns for the third and final out of the game. Advertisers 11, Collegians 9, and Kennebunk with the victory! The Advertisers compiled an average record that season at 19-18-1. But despite their having almost the same number of losses as wins, there was a sweet satisfaction of beating their arch-rivals the Collegians, a team made up of college ballplayers. Given the former President Bush’s competitive nature, it’s a good bet that the loss to the Advertisers stung. 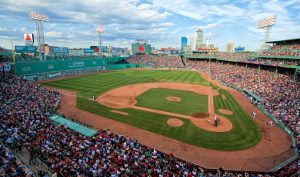 While George H.W. Bush’s team didn’t win that day, he would one day win the White House in 1988, after serving as President Ronald Reagan’s vice president for eight years. Barbara Bush would also serve as First Lady until her husband lost his re-election bid to former President Bill Clinton in 1992.

George and Barbara Bush and their extended family spent every summer at their Walker’s Point home in Kennebunkport. The former First Lady passed away in April 2018 and the 41st President of the United States followed her in November 2018. Their son, former President George W. Bush, former First Lady Laura Bush, and other members of the Bush clan still summer at Walker’s Point.

The Brick Store Museum in Kennebunk contributed a great deal of the information for this story. To learn more about this storied baseball game of yore and the Kennebunks’ rich history, visit www.brickstoremuseum.org.