Like father, like son, so the saying goes. Like Bill Rowan, like Josh Rowan. This pair are true sailors who are now engaged in a project to preserve a piece of Maine’s storied maritime history—the full restoration of the nearly hundred-year-old schooner Hindu.

They began the $500,000 restoration project in the fall of 2020, after a freak accident last summer off of Long Island, New York, forced them to make some repairs. They chose to hire some shipwrights and store the boat in a makeshift heavy timber barn in Thomaston, across the street from the Maine State Prison store.

“He wants to put it back to the way it was originally designed, as a family yacht,” said Bill, 77, referring to his son Josh, 41.  Bill introduced Josh to sailing in Oregon when his son was just a baby. “It will last for another hundred years, the way Josh will build it.”

Erin Desmond, Josh’s fiancée, started a GoFundMe page on Facebook to help raise the needed funds for the project. To date, they have raised almost $50,000 in donations from sailing enthusiasts all over the world. Josh believes the Hindu will not be finished until June 2022, but he believes the result will be well worth the wait.

The Hindu’s rich history and deep Maine roots make the project extremely worthwhile, Josh explains. “With the Hindu, she’s an onion. It just depends on how deep you want to go.”

The schooner was built in 1925 by Hodgdon Brothers in East Boothbay Harbor and designed by William Hand. It is one of a few Hand vessels still sailing in the world. Josh said it was a pleasure boat until World War II, when the government commissioned it into service. 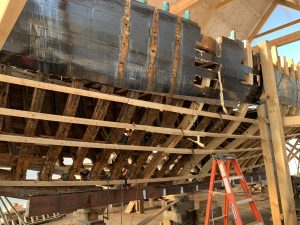 The Hindu and its crew worked with the Coast Guard and the US Navy to hunt German U-boats. The schooner was painted battleship gray and outfitted with a 50-caliber machine gun and depth charges. After the war, says Josh, the Hindu was the first whale-watching boat to sail out of Provincetown, which helped start a whole new maritime tourism industry. Since 1946, it is estimated that more than two million people have sailed on the Hindu. Josh explained that a former Hindu crewmember named Napi told him about this period in the Hindu’s history. Napi, who recently passed away at 86, sailed as a Hindu crewman from 1946 to 1948.

It came into the Rowans’ lives in 2011, when Josh discovered the schooner had been repossessed by a bank and needed a new owner. Josh convinced Bill to purchase the schooner, and for the next seven years, father and son took out guests for day sails and special charter trips out of Key West, Florida, during the winter months and out of Provincetown, Massachusetts, during the summer season.

One of the first voyages Bill and Josh made with the Hindu involved navigating through the Great Lakes and back to the Atlantic Ocean. During that trip, they piloted the schooner through the Canadian locks, to the St. Lawrence River from Lake Champlain. Josh said it was the deepest vessel to ever do that.

Inside the barn in Thomaston, the Hindu has been completely pulled apart. It will have new decking and new beams for its hull. The original wooden frames are nearly rotted through, after nearly a hundred years of use. Josh said they will use native Maine wood to restore the vessel, along with some wood from the Rowan’s property in Oregon.

What many people don’t realize is that every boat undergoes periodic restoration work. Even a fiberglass boat has to be repaired and repainted every 10 years, which can cost $3,000 to $5,000, Josh said. A wooden boat, like the schooners that make up the windjammer fleet in Camden and Rockland, can cost a great deal when they undergo maintenance and repairs every 10 years. For example, the Olad, which sails out of Camden every summer, underwent a lengthy restoration similar to the Hindu, Josh said. The Victory Chimes also has a lengthy restoration on the horizon, and their owners are committed to preserving the schooner vessel so it will sail well into this century, Josh said.

“You will never get rich owning a wooden boat,” as Josh put it. 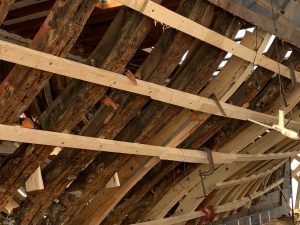 But saving the Hindu represents preserving an important link to the past. “Each of these boats has experienced their piece of history, and they are just disappearing right and left,” Josh said.

The timing for the project couldn’t have been better. Bill said their business, Hindu Sailing Charters, took a big hit from the COVID-19 pandemic. Like many other schooner operators, they were forced to take far fewer passengers out for day sails and charters last summer than in past years. Because of that, Josh said the Hindu was not able to generate the revenue they needed, to contribute to the restoration.

When they struck a sabotaged motorboat that was submerged off Long Island, New York, last summer, and the Hindu sustained damage and developed some leaks, Josh knew it was time to begin the restoration. Bill said the company will continue to operate two other vessels: the Bloodhound and the catamaran Argo in Key West. Bill also has his boat the Edward D. Rowan, which he names after his father.

Bill serves as a host for their catamaran, and at the dock in Key West he is known as the “Admiral.” Many people marvel at the life he’s led as a fulltime sailor, but being a down-to-earth person, he doesn’t see it that way.

Bill said he built boats In Oregon and sailed to Central America and South America for years. Along the way, he introduced Josh to sailing and boat building.

Josh attended private school in Lake Placid, New York. His headmaster Frank Wallace is also his godfather. When Josh was not attending school, he grew up on the 50-foot Edward D. Rowan. He recalled that just after he graduated from high school in 2000, he and some friends sailed from Key West to Rockport. That summer Josh worked at the Wayfair Boatyard in Camden, and he worked there for over a year. 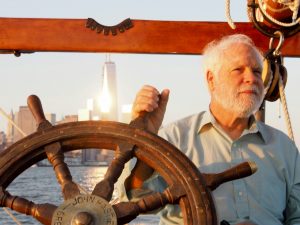 Along the way, Josh made many friends from Midcoast Maine who are skilled in the art and craft of boat building and in the use of the specialized tools of the trade. The tools used now are often the same ones that boat builders have used for centuries.

When Josh and Erin build a new home, they will use a blueprint that Bill designed for Josh’s grandmother, which is a 1780-era Carriage House. They will move the barn to the rear of their property and use it to do repair work on their boats, when needed.

Beginning their new life in Maine by restoring the Hindu to her full majesty and grace is something that has great meaning for Josh and Erin—a significance which goes well beyond their business interests.

Josh observed that he and Bill often meet people who board the Hindu who share their memories of sailing on her when they were kids. It’s a schooner that has spanned generations and created lasting memories. Josh has noticed that people who sail on the boat often “walk away with a different point of view,” more attuned to how things used to be.

Erin wants to see the Hindu win over more fans when she sails again in 2022 and reaches her hundred-year anniversary in 2025. “It’s a contribution to future generations and to the past to preserve maritime history in the United States,” she said. 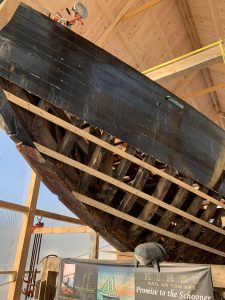 Bill said the Hindu couldn’t be in better hands. Josh has over the years become a master boat builder who is passionate about his craft. “He’s learned so much more than I’ll ever know.”

“It will be a beautiful thing when she’s done,” Bill said. “It’s great to see that boat move through the water.”

For more information about the schooner Hindu and its restoration, please see the text and video at Hindu’s GoFundMe page, https://www.gofundme.com/f/Promise-to-the-Schooner-Hindu