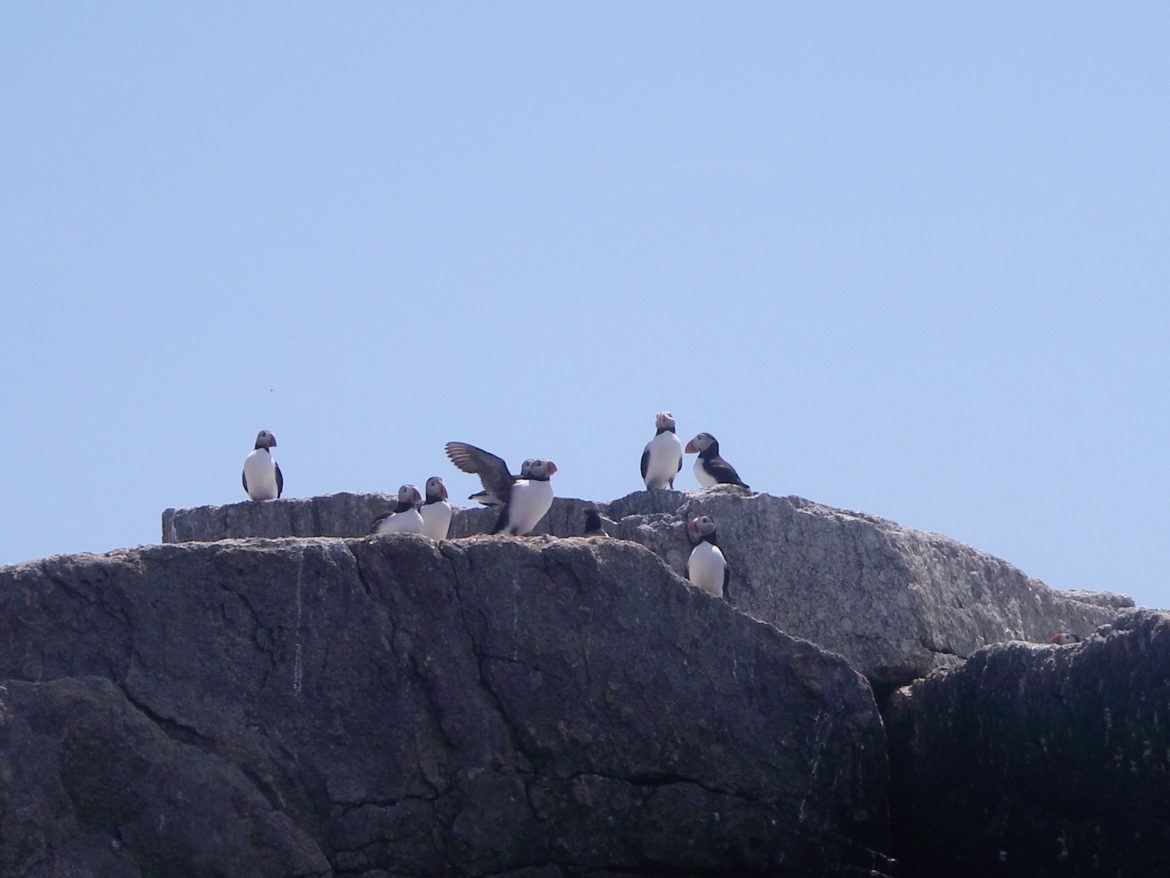 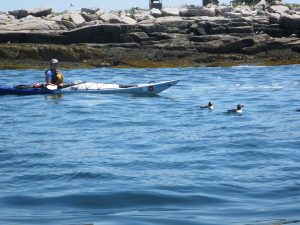 A seemingly nondescript barren atoll located in outer Muscongus Bay, Eastern Egg Rock does not appear to be a compelling sea kayak destination.  Appearances can be deceiving.  For a few weeks each year, migratory Atlantic Puffins breed and nest on the island’s gigantic granite boulders.

The colorful seabirds haven’t always stopped there.  A variety of circumstances drove them from that natural roosting habitat in the late 19th century.  A historic restoration effort has resulted in scores of puffins returning each year.

Eastern Egg Rock has a dual attraction for me.  First, navigating by sea kayak to the remote island is an ambitious undertaking, which makes it a potentially positive and interesting one. Second, the reward is a thoroughly entertaining visit with what I consider to be the most extraordinary seabirds to be found on the Maine coast. 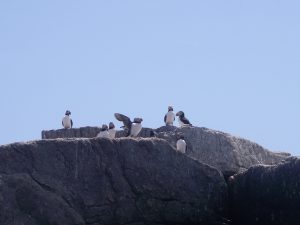 Getting there is a challenge.  The island is situated six miles east of New Harbor.  While making this journey in a sea kayak, you are completely exposed to the vicissitudes of the open sea, except when you pass tiny Western Egg Rock at about the midpoint.  Several years ago, following an unappealing return crossing to New Harbor in unexpectedly windblown choppy seas, I concluded that route was too hazardous for a timid senior citizen.  Fortunately, departing from the scenic coastal community of Round Pond offers a more benign itinerary. 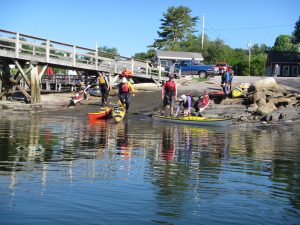 Benign being a relative term, attentive planning is still essential for a safe, enjoyable trip.  A prerequisite: the puffins must be there, which usually occurs in mid-June to mid-July.  Fortuitously, a knowledgeable source recently confirmed their presence.  Next, important factors to be considered are winds, seas, tides, and weather.  Did I mention winds?  Offshore winds are great going out, but the destination is Eastern Egg Rock not Spain.  Returning into robust headwinds could seem like a journey from the Iberian Peninsula, if you make it back.  While onshore winds are preferable when returning, anything over 25 knots gets downright scary, especially for the gray-haired among us.

Identifying what appeared to be a Goldilocks day, I announced a Penobscot Paddle and Chowder Society trip.  Predictably, club interest was significant.  A few days later, ten paddlers met early in the morning at the Round Pond Boat Landing on a calm sunny day.  Our group consisted of eight solo kayaks, and I paddled a tandem kayak with my lovely wife, Nancy.

Departing with a gentle offshore wind and an outgoing tide, our flotilla traversed through Muscongus Sound into the bay.  Passing between Ross and Haddock Islands, the low profile of Western Egg was visible southeast, with a hazy glimpse of distant Eastern Egg beyond.  Since landing on Eastern Egg is difficult and prohibited, pausing at Western Egg is essential. 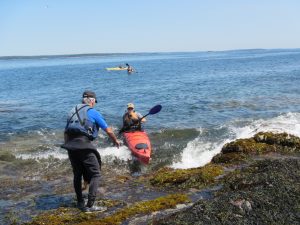 Western Egg is also a critical turnaround point, if needed.  If offshore winds increased or seas worsened, the trip would be aborted, and a visit with the puffins postponed until next year.  This year, however, the paddling gods smiled on us. We experienced calm seas and almost nonexistent winds on arrival.  After a brief respite, we persisted towards Eastern Egg, about three miles east.

Approaching the distinctive boulder pile, my paddling companion observed, “I think those two birds are puffins!”  Within minutes, dozens of the delightful seabirds were in our midst.  While many floated in the water within yards of our boats, others fluttered rapidly to and from the island in their unmistakable style.  While seemingly awkward, they reach flying speeds of 55 miles per hour.  Enjoying a magical time, we lingered for perhaps a half hour, bobbing in placid swells just offshore.

Since conditions were exceptional, paddling around the island was the consensus decision.  Favorable seas allowed for close exploration of the rugged shoreline.  While puffins were less abundant on the south and east sides, we sighted numerous other species, including terns, guillemots, eiders, and gulls.  The bad boys of the seabird world, gulls are a significant threat to the puffin population, and “predator management” is necessary for puffin survival on the Egg. 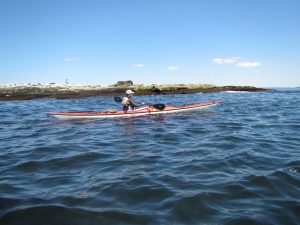 Completing the circumnavigation, our return direction was not obvious, as Western Egg blended with islands closer to shore and the mainland.  Since several of us had calculated compass bearings in preparation for the trip, that predicament was easily remedied by following a predetermined course.

After a brief interlude on Western Egg, a tailwind and a beneficial tide facilitated an expeditious return to Round Pond. A member of the group measured the trip to be 15.8 miles on his GPS.  It’s difficult to imagine more favorable circumstances for the journey.  If I’m still taking air and the puffins come back, we’ll try again next year.