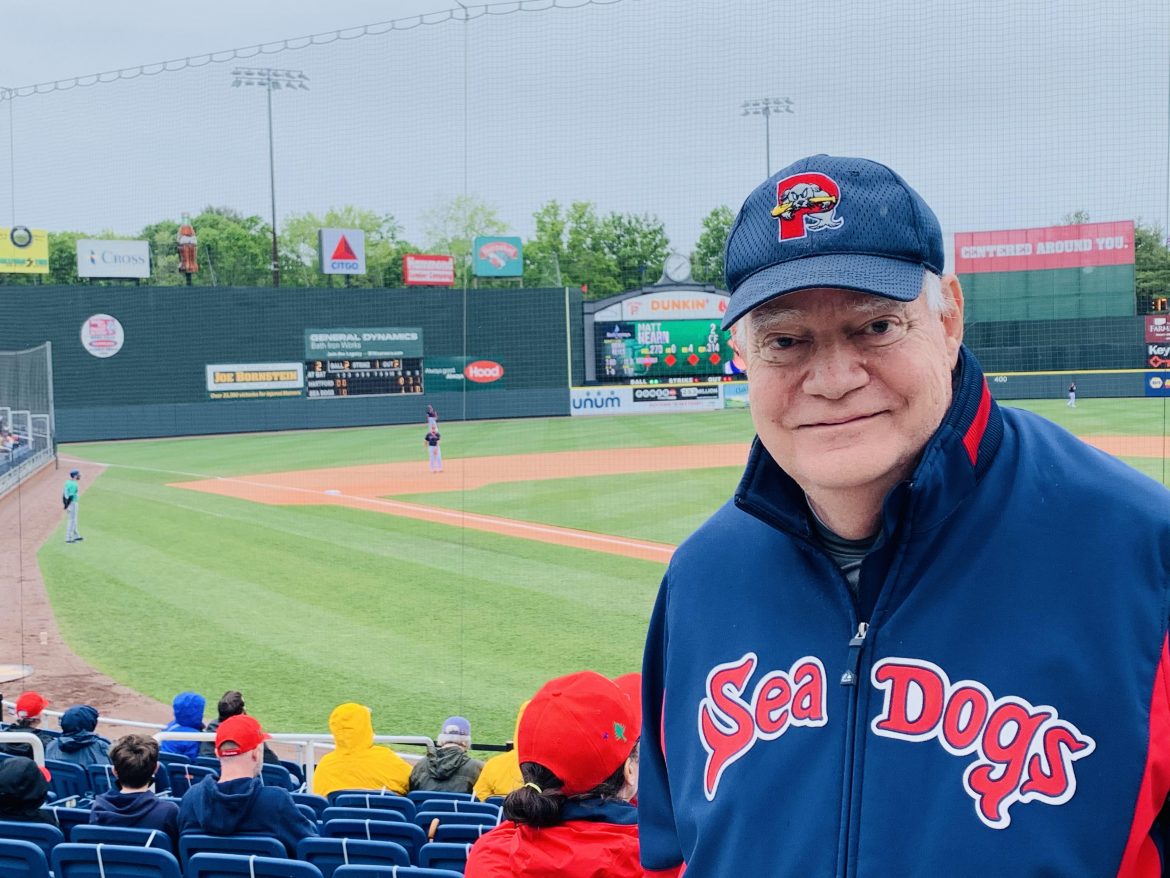 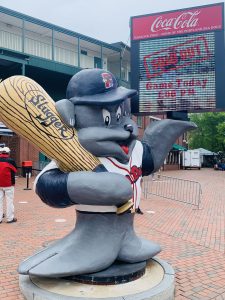 “If we build it, they will come,” is what Portland Sea Dogs owner Dan Burke told his friend, Charlie Eshbach, in 1993 when they decided to bring professional baseball to Maine all those years ago.

That phrase has become synonymous with the movie Field of Dreams and is part of the speech that James Earl Jones’s character delivers to Kevin Costner’s character, about the healing and enduring power of baseball, America’s pastime. Every August, the Sea Dogs play a Field of Dreams game where their players take the field from a makeshift cornfield, coming in from centerfield in old-fashioned baseball uniforms. This is one of the many promotional ideas that Charlie has brought to Sea Dogs fans during his tenure.

“I was the first employee,” beginning on January 3, 1993, Charlie recalls. He was 40 years old when he decided to leave his position of president of the Eastern League in Connecticut to help his friend create a new Double A franchise for the Florida Marlins.

As soon as he arrived in Portland with his wife, Ann-Marie and their two sons, Brian and Scott, Charlie went right to work on the City of Portland’s Stadium Committee to help city planners craft what would become Hadlock Field. In some ways, Charlie was like one of the Field of Dreams players who stepped out of a cornfield. He was the perfect man for the job, who came at just the right time. 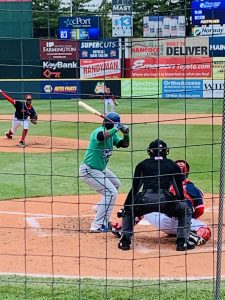 He had previously served as general manager of the Bristol, Connecticut, Red Sox for seven years before serving as the Eastern League president. As much as he enjoyed that job, Charlie recalled that “it was a very lonely job,” where he spent most of his time problem-solving behind the scenes.

Those experiences would prove invaluable as he helped make the Portland Sea Dogs a reality. “I learned how not to run a minor league team,” Charlie said.

“Here it was interesting and fun because you had people to work with and people coming to the game and having fun,” observed Charlie, who is now 69 and serves as the Sea Dogs’ elder statesman in the role of senior advisor. He is more than content to offer advice to Sea Dogs President and General Manager Geoff Iacuessa, if needed. “The history that I have is important,” Charlie said.

Twenty-eight years ago, it took 15 months to build Hadlock Field and put a team of players, coaches, and employees on the field and ready to go. Charlie will never forget the Sea Dogs’ first opening day.

“It was crazy. It surpassed any expectations I had,” he said. “It was a full house. By the time I was ready to go home that night, I thought how it took 15 months to get ready for this game, and now I have less than 24 hours to get ready for the next game.”

Under Charlie’s leadership as general manager and president, the Sea Dogs were fully embraced by Portland and Maine. Attendance was strong in the 6,000-seat capacity stadium. 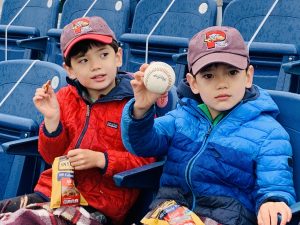 Then the Sea Dogs joined the Boston Red Sox minor league system in 2003, just before the team broke an 86-year-old curse in 2004 and won its first World Series since 1918. “So, we’re responsible,” Charlie joked.

As the Red Sox went on to win another three World Series titles in 2007, 2013, and 2018, Charlie said many of the Red Sox star players were on the Sea Dogs roster before they make it to the Big Leagues. Some of them include Jacoby Ellsbury, Dustin Pedroia, Kevin Youkilis, Xander Bogaerts, Mookie Betts, and Jackie Bradley Jr. The Sea Dogs pitching rotation included Jon Lester, Jonathan Papelbon, and (when they were owned by the Marlins) Josh Beckett.

With such great talent on the field, the Sea Dogs also won their only Eastern League title in 2006. Charlie said.

Thanks to the Burke family and Eshbach’s leadership, the Sea Dogs are one of the most successful Double A franchises in professional baseball. So much so that they were among the minor leagues that were kept intact after Major League Baseball assumed control of the minor leagues in February 2021. Charlie pointed out that at that time, 160 minor league affiliated teams were cut to 120 teams.

Anyone who has ever attended a Sea Dogs game in the summertime can attest the team has created a very affordable, family-friendly, and well-run experience. On Friday nights, fans enjoy brilliant fireworks displays. Slugger, the team’s mascot, is a big draw unto himself, with legions of young baseball fans seeking his autograph and a photo op. There are bobblehead giveaways and delicious concession fare that fans can now order by smartphone, via a special QR code, and have the order delivered right to their seats. The Sea Dogs also have an exceptionally friendly staff. All these features and amenities are hallmarks of the concept envisioned by the Burke family. Charlie describes the Sea Dogs fan experience as “a nine-inning vacation.” 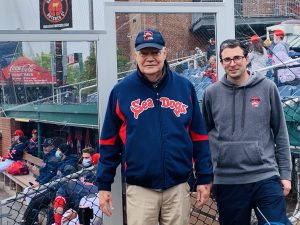 The Sea Dogs are blessed with strong sales for tickets, souvenirs, and concessions, along with great corporate sponsorship. Some of the Maine companies that have their names displayed on the Sea Dogs’ Green Monster in left field and the rest of the outfield are Hannaford Supermarkets, Hancock Lumber, Cross Insurance Co., and Maine Health. The Shipyard Brewing Co. helped created the left field corner concessions area, where fans can get some of the Portland craft brewery most popular beers.

Charlie said it is work in progress. “Keep it fresh and keep working at it” is the team’s philosophy. After Dan Burke passed away, his son, Bill, and Bill’s sister, Sally McNamara, have kept that tradition going even when the COVID-19 pandemic forced the entire 2020 season to be canceled.

Charlie said the Burke family chose to pay all of their full-time and part-time staff members their regular salaries. “They didn’t have to do that, and the Sea Dogs were the only minor league team to do that,” Charlie said.

During the pandemic, the Sea Dogs staff carried out stadium improvements and maintenance. And the organization did a number of things to generate some revenue and to stay connected to their fanbase. Charlies said they converted the baseball field into a nine-hole golf course. They offered ballpark food to go and offered outdoor dining on the baseball field last summer. “But without the fans and regular baseball games, it wasn’t the same,” he admitted. “There are lots of things in life that you enjoy and take for granted. When they are taken away, you realize how much you have lost.”

Now nearing 70, Charlie still loves coming to the ballpark as much as he did when he took his first minor league baseball job with the Elmira Red Sox of the New York Penn League in 1974. He had just graduated from the University of Connecticut and was making $80 a week. “I ate a lot of ballpark food,” he recalled. 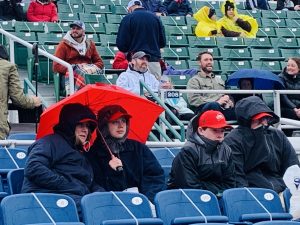 After he finished his stint with the Elmira Red Sox, Charlie worked as the business manager for the Bristol Red Sox and soon became the general manager. During his tenure he saw future Red Sox stars like Butch Hobson, Wade Boggs, Bruce Hurst, and John Tudor take the field.

At 29, Charlie was elected Eastern League president, a post he held for 11 years before coming to Portland.

Charlie said his mother often joked that “I never had a real job.”

The fans are the ones who keep him coming back for more.

On Memorial Day Weekend 2021, the Sea Dogs were one homestand away from being at full capacity, thanks to Maine’s strong vaccination rate and declining COVID-19 cases. The last time the stands were filled with fans was in September 2019. Just seeing baseball and all the joy it represents return to Maine after weathering the pandemic is enough for Charlie.

Now that Portland Sea Dogs baseball has returned, so have the fans, young and old. They can savor the magic inside the baselines and on the “Field of Dreams” this summer and beyond, thanks to the Sea Dogs’ biggest fan, Charlie Eshbach. His work back in the ‘90s to help get Hadlock Field built and a team assembled laid a solid foundation for the Portland Sea Dogs today.

“All I have to do is watch the people come to the ballpark, and they come in and they’re happy. To be able to do that for them in this day and age is very satisfying.”

To learn more about the Portland Sea Dogs and for ticket information, please visit www.milb.com/portland.