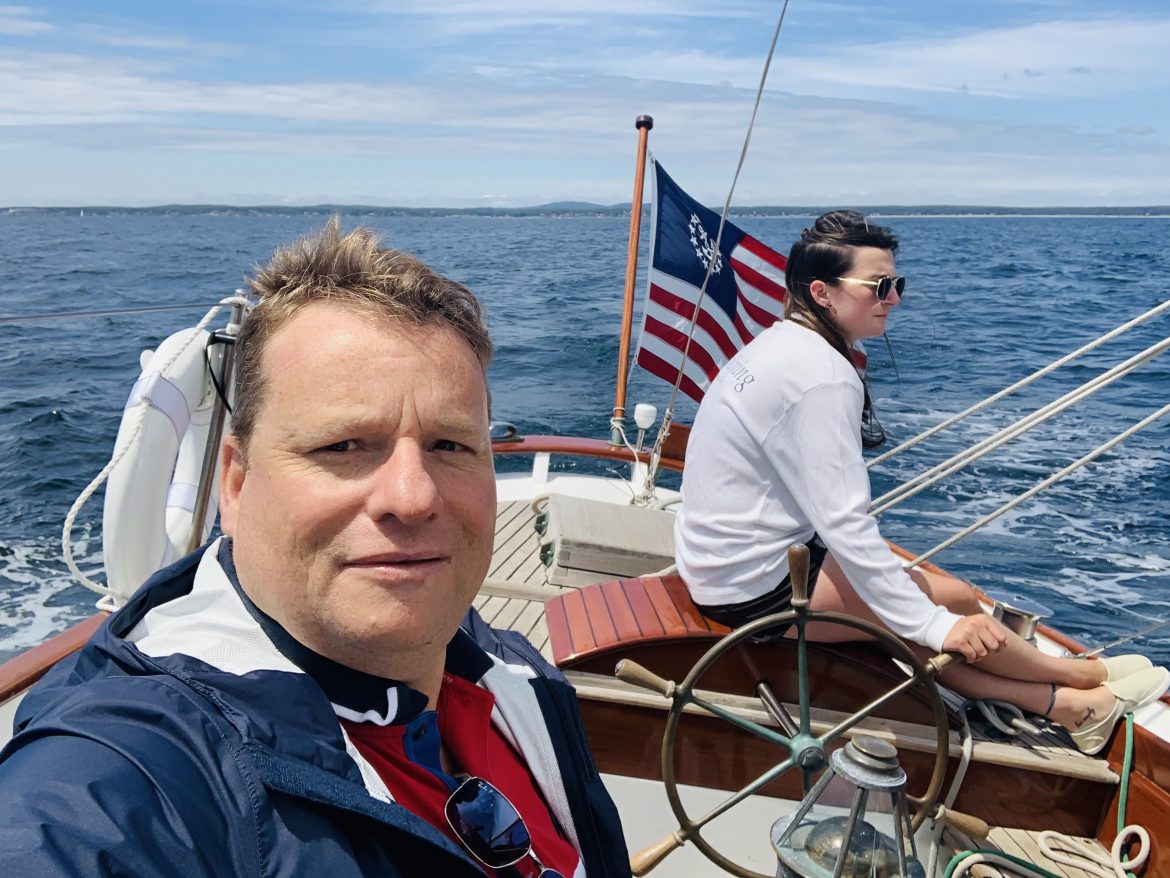 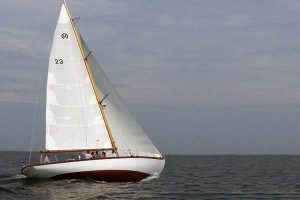 While every cloud may have a silver lining, Perkins Cove in the southern Maine coastal resort community of Ogunquit has one in the form of a classic sailboat named the Silverlining. It is just waiting to take you on a voyage that is both relaxing and exhilarating.

When Captain Doug Gordon of Wells purchased the sloop back in 1982, he needed to do extensive work to restore it after years of neglect. In appreciation for the boat and the process of fixing it, he renamed the refurbished sailing vessel the Silverlining. Since then—for 39 years now—Gordon has been taking passengers out for two-hour day cruises and sunset cruises out of Perkins Cove. The Silverlining has the distinction of being the cove’s very first tour boat, with a total of seven operating at this time.

On my birthday, July 5, I love to go on a two-hour morning sail out of the Perkins Cove, and this year the sleek Silverlining appealed to me. Maybe it is because it is a smaller and faster sailboat than some of the others I have sailed on, or perhaps its appealing, positive name resonated with me.

From Bar Harbor to Kittery, summer residents, vacationers, and year-round inhabitants such as myself are eager to again enjoy all that the Maine coast has to offer. A year after the COVID-19 pandemic shut down much of Maine’s tourism economy, people want to take off their masks and get back to summer on their own terms. 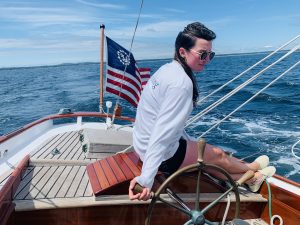 This is certainly how I felt when I decided to head out for this special sail on my 57th birthday, or “Heinz 57” as I referred to it on Facebook. But getting to the dock on time presented a challenge. Anyone who has ever visited Perkins Cove and Ogunquit during the height of the summer season will tell you that parking is scarce.

At first, it didn’t look promising. All of the spaces were full, and no one was leaving. Undaunted, I summoned my birthday-boy karma—and my patience—and circled around the cove a few times. Then it happened. A BMW with Georgia plates backed out of his spot, which was perfectly located right across the road from the pier, and I pulled in. Mission Accomplished!

Captain Gordon and his first mate were there to greet us (myself and six other passengers) that morning, as we gathered and boarded. They guided the boat smoothly out of the cove and out to sea. The weather and sailing conditions were perfect. Gordon said his boat, a 42-foot Sparkman & Stephens sloop, was designed to race for the commodore of the yacht club in Marblehead, Massachusetts. We learned that the Silverlining can sail at speeds of up to 9 knots. She was built in 1939 entirely of wood and bronze by the well-respected Maine builder Henry R. Hinckley of Boothbay Harbor.

Once we got underway and the wind filled our sails, we were cruising at 7.5 knots and gliding on the waves. We were able to experience some real sail rolling and gliding that practically put my feet in the water. As one of the few boats sailing there—a few miles off Wells Beach and Ogunquit Beach—we were able to have that free-and-clear feeling of racing both back into time and ahead into the future. 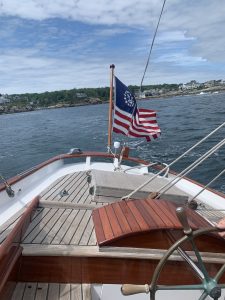 Gordon explained the sailboat has 900 square feet of sail with main and working jib alone. This combined with its nearly all mahogany and teak wood construction made the Silverlining a fast and agile boat. At times, it felt like we were racing for some coveted cup, as we passed the main channel buoy.

On this trip, the Silverlining took us close to the iconic Cliff House Resort in Cape Neddick. It’s a startling view that usually only skilled sailors and lobsterman get to see from the vantage of their boats.

When we made our way back to the cove, Captain Doug had to request that one of the tourists who were gathered on the bridge push the button to open the wooden span so we could dock. Plans are currently in the works to replace the classic bridge with a more modern bridge that will be fully automated.

It was just a two-hour sail, but I told Captain Doug it was one of the best two-hour sails I could remember and the best birthday excursion I could imagine.

I am not schooled in the ways of sailing, and I have never owned a sailboat, but I love getting out on the ocean whenever I can. I first caught the sailing bug when my wife, Mary, and I went camping in Rockport, Maine, back in the summer of 1994. We went out for a two-day sail on the schooner Surprise out of Camden Harbor, and it was incredible in every way. I didn’t want it to end.

Over the years when we returned to Camden and visited Bar Harbor and Boothbay Harbor from our home in southern Maine, we would make it a point to go for two-hour day sails aboard the schooners Olad, Appledore, Rachel B. Jackson, and others. I have also sailed out of Lunenberg, Nova Scotia, and the Bahamas. One thing that is on my personal bucket list is to go out on one of the Maine schooners for a couple of weeks and capture that experience. Stay tuned. 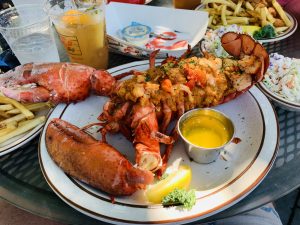 My family met me that afternoon, and we enjoyed a birthday lunch at Barnacle Billy’s, a wonderful Maine institution. I had a baked stuffed lobster, which was exquisite and almost too good to eat (not that that stopped me).

Often Mainers may choose not to brave or bother with a visit to their favorite coastal destinations because of the influx of summer visitors and tourists. And who can blame them? But with planning—and a little luck and fortitude—you can make things work out so that you, too, can enjoy summer in Maine your way.

If 2020 and year of COVID taught us anything, it is that we need to appreciate and savor as much as we can, when we can. My advice from my experience: throw caution to the wind and the waves, and chart your own course to find your silver lining.

For more information about the Silverlining, visit silverliningsailing.com.