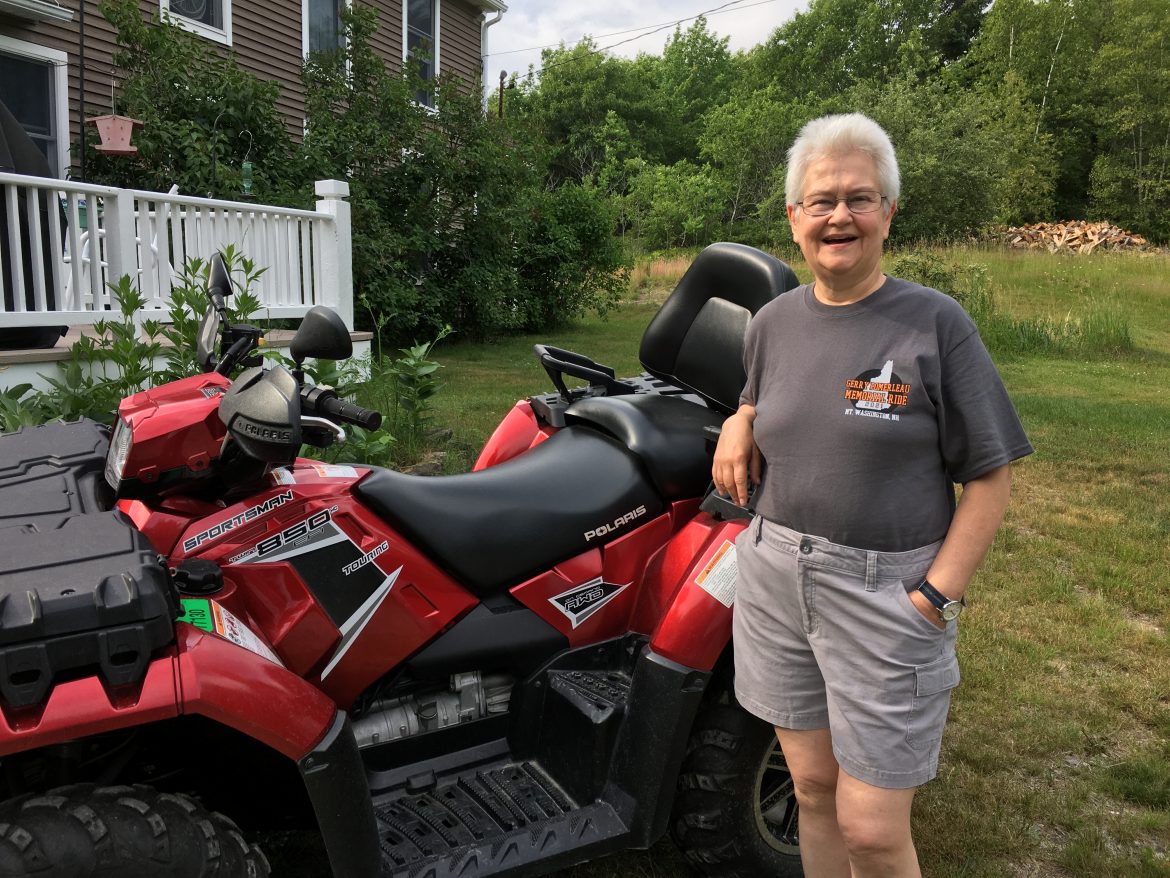 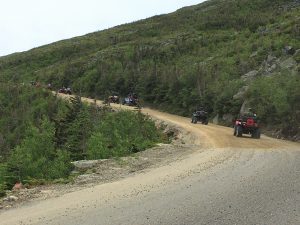 Back in 2015 was the first time my spouse and I planned to ride our ATV up the Mount Washington auto road. This annual event is the New Hampshire ATV Club’s biggest fundraiser, named in honor of ride founder and former member Gerry Pomerleau, who died in 2011.

So, that spring of 2015, we rented a house for a couple of days, drove to New Hampshire with the quad on a trailer, and . . .  it poured the day of the ride. The next couple of years we were away when the event occurred. In January 2020, we got online early in the morning to get tickets for the ride that June and, after a few glitches with the reservation system, we managed to get them. Then the pandemic hit, and the ride was canceled.

But because we had paid for tickets, we were given tickets for this year’s ride, set for June 26, 2021.

John Martell, president of the club, told me this spring that the ride started small in 2000, but now draws a total of about 1,300 ATVs between the day’s two rides, morning and afternoon. And many of those machines are carrying two or more people. ”ATVing has exploded the last two years in this state,” he said. Riders from all over New England as well as New York and Canada take part.

What’s special about it? “You can’t ride up there whenever you feel like it,” Martell said. 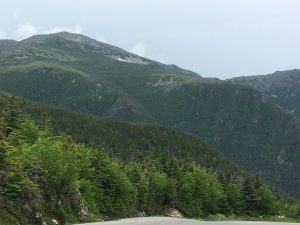 This will be the second year the auto road’s operators have allowed ATVs to ride the road on weekdays in early June and September, unconnected with the ATV club. The club ride is the only day the road is reserved exclusively for the use of ATVs.

The fundraiser, which pulls in about $10,000 in ticket sales, also raises $7,000 to $8,000 in sales of club paraphernalia—T-shirts, sweatshirts, caps, and so on, he told me. The money goes to help other ATV clubs, to pay for trail maintenance, and for gifts to charitable organizations, food pantries, and others. The ride nearly always sells out.

In addition to the cash it brings in for the ATV club, the ride generates a tidy amount of business for restaurants and lodgings in the region, Martell said. Rental accommodations get sold out for 20 or 30 miles around, so it’s best to make your reservations at least a couple of months in advance, for the end-of-June event. One other thing to keep in mind—rented ATVs are not allowed on the ride. You must bring your own machine.

Martell’s advice to prospective riders? ”Bring warm clothes. It can be 80 degrees at the bottom and 35 to 40 at the top. And bring a camera.”

We took both pieces of advice when we packed for this year’s ride. Actually, we weren’t sure until shortly before the time we were supposed to show up—2 p.m.—whether we would actually go. The weather had looked rough for days, with rain and wind in the forecast. And Mount Washington is famous for its high winds and unpredictable conditions. 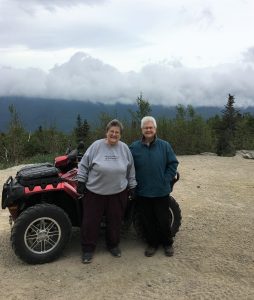 We finally decided to go, saying to ourselves that we could turn around anytime if the weather got bad. When we arrived at the parking lot, a corps of fluorescent-vested, flag-holding traffic monitors directed us around a circuitous route to the field where we left the car. A small army of volunteers were directing traffic, checking tickets, handing out wristbands, answering questions, and being generally helpful.

We got the quad off the trailer, stuffed gear into the storage compartment on the ATV, put on more clothes than we needed at ground level and headed off. At the base of the mountain, it was 80 degrees or so and humid, just as Martell had mentioned. A sign board told us the temperature at the summit was 48 degrees F, and the wind was blowing at 58 mph.

The first bit of the road was lined with deciduous trees, and the light was filtered through their leaves. The pavement was smooth beneath our wheels as we zipped along.

It didn’t take long for the air to start getting cooler. After 15 or 20 minutes, I asked Maureen to stop so I could get my jacket out and put it on. I was already wearing a long-sleeved shirt and a down vest, but I was chilly.

As you might expect, the road curves around the side of the mountain, with frequent pull-offs for scenic views. Even with the low clouds, we could see row on row of the White Mountains with deep, green valleys between. The clouds themselves added to the atmosphere. At one stop, we volunteered to take a photo of a group of fellow riders so they could all get in the picture. Then one of them returned the favor.

We’d started at roughly 1,500 feet above sea level at the base, and at around 5,000 feet, a steep section of road loomed above us. Besides the grade, there was a 1,000-foot drop from the left side of the road and no guardrail. Oh, and the road went from paved to dirt for this stretch. 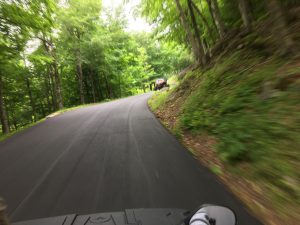 Maureen pulled over just before the pavement ended and sat looking up at the climb before us. Well, I say “us.” It was easy for me—I was just a passenger sitting comfortably on the back of the machine. Maureen had to negotiate what was clearly an intimidating section of road.

She turned to me. “I keep telling myself it’s no different than the rest of the road, and there’s no reason I can’t do it. And then my stomach says something different.”

We sat for a while as ATVs buzzed by us one after another, scaling the steep section of dirt road. A few even came by going the other way. I crossed the road to take some photos.

After a while, Maureen was ready to go. I got back on, and up we went, with the sheer drop to our left and a 3-foot gully to our right. We made it to the next section of paved road and turned into a pull-off to in the view and relax. It had been sprinkling a bit as we came up the dirt road, and now it was raining harder. We weren’t soaked, but Maureen’s glasses were spattered with raindrops, making it harder to see. On top of that, the wind was blowing hard into our faces. We decided to turn around.

Now the 1,000-foot drop was immediately on our right. Slowly, slowly, we crept down the steep, narrow section of road, staying as close to the middle as we dared. From my perch on the back, I looked out across empty space at the cloud-topped mountains and felt like I was sitting in mid-air.

Whew! We made it down that dicey stretch! 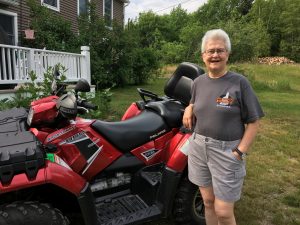 As we continued to descend, the rain let up some, and once we were back on pavement and away from the steep drop, we could enjoy the beauty of the mountains, even with clouds and fog.

Back at the base, we headed over to the New Hampshire ATV Club tent to buy T-shirts commemorating the ride. We might not have made it all the way to the top, but we felt we’d earned them just the same.

Riding up the Mount Washington Auto Road was a memorable experience, and one I’m glad we finally got to enjoy. If you decide to go, get your tickets early—they go on sale in January for the June ride—bring warm clothes and maybe a rain jacket, and be prepared for adventure!