I was a car designer with Ford and Chrysler in the 1950s, a time of powerful, classic cars. What made my employment as a designer unique is that I was a 23-year-old farm boy from Millinocket with no formal art training, and in the U.S. Navy, at the time Ford hired me. I still had a year before my enlistment discharge a year later in June 1954. I began work at Ford just a few weeks later. At that time Ford, GM, Chrysler, and American Motors all had a hiring policy that required new designer applicants to be art or design school graduates. How did I manage to slip between the cracks?

Back to the past. I was just a typical young car nut in my high school teens, and I was good at drawing, so I did just that, doing drawings of cars . . . mostly my own designs.  After graduating from high school, I wanted to continue in art and design as a professional career, but I could not afford to go to art school. However, when the Korean war broke out, the GI Bill benefits were re-instated.  I joined the Navy to obtain the college benefits upon my discharge in 1954. 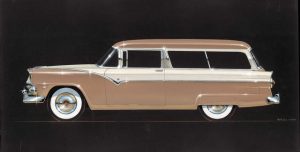 Unfortunately, I never got to use or need the benefits.  Ford Motor Company had made me a design job offer while I was still in the Navy. This unusual situation took place because a national car magazine published some of my car designs in an article titled “Dream Car Sailor.” During my Navy enlistment, I had continued designing cars in my spare time. This was the totally unexpected, surprising result of that spacetime activity. 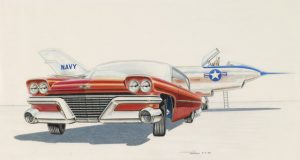 I began employment with Ford in July 1954, just two weeks after my Navy discharge. I began work in their Advanced Design Studio, which was composed of a dozen or more newly employed design school graduates.  However, I was not a design school graduate, the only one without that qualification. It was an exceptional opportunity, but it presented many challenges to my novice art and design talent. I quickly realized I was “behind the eight ball,” so to speak, and that it would be a daunting task to succeed, compete, and advance in the situation I found myself.

The answer was to bear down and continue the love and perseverance for designing cars that had gotten me to this point.  I was determined to defy any doubts that I could succeed. Bear down. I did just that, working every evening in a small suburban Detroit apartment with my new young wife, both of us from the small town of Millinocket, Maine.  In a matter of just a few months, I was the one in my group who was getting the favorable comments and attention. In just four months I was promoted from the Advanced Studio to the top Ford Production Design Studio, well in advance of my design-school counterparts. In less than a year I found myself as one of the leading (and youngest) designers in this small group of highly experienced professionals.

I spent the next three years at Ford working on the ʼ56, ʼ57 and ʼ58 models of the Parkland and Fairlane station wagons, sedans, and Thunderbird.  Despite the immeasurable experience I had gained at Ford and my enjoyment in working there, I then decided to make a change to Chrysler because of management changes. I began designing at Chrysler for the Plymouth and Chrysler divisions.

And soon, my young Millinocket wife and I made another change, leaving Detroit. By ʼ59, even while making a very good salary and experiencing success, I began considering moving back to the New England area and starting my own industrial design business.

I did just that in 1960, starting AR Williams & Associates in Lynnfield, Massachusetts. It was another challenging chapter in our life. I was starting over from scratch with an office in the basement of our home . . . now with three children and a fourth on the way . . . and my wife in another added role, as my administrative assistant.  It was “bare down” time again but with much more at stake.

Within a few months I had several clients, and I soon had more work than I could do alone. I was able to rent a small office in the next year, and hire my first employee, then a second and third.  My design business became very successful and grew to six designers. The company won over 50 national and international design awards before I sold the business to a long-time client, Tom’s of Maine, in 2000 and moved back to Maine. 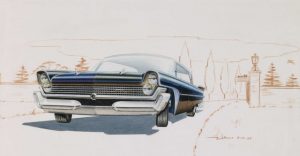