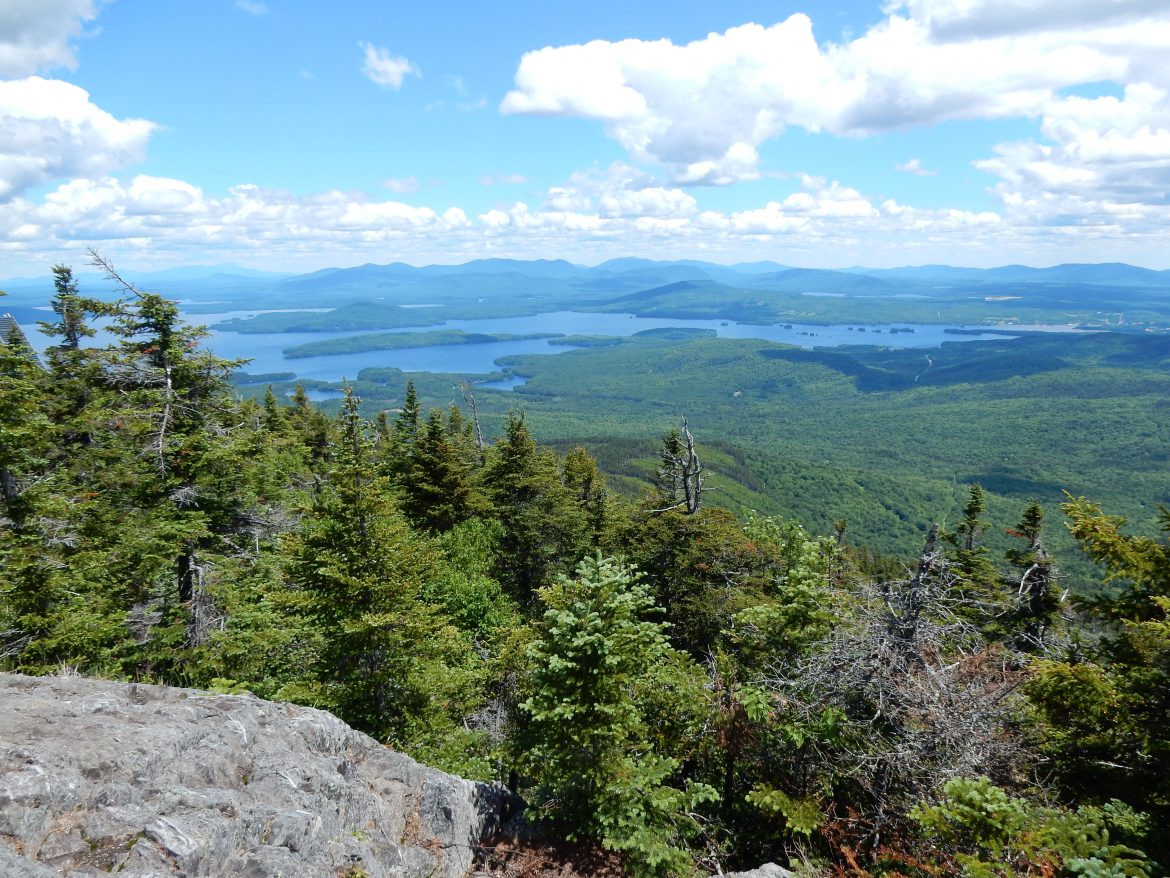 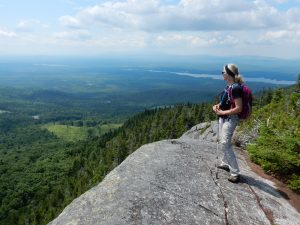 The view from the ledges atop 3,194-foot Big Moose Mountain is a grand one. It takes in the magnificence of big, blue Moosehead Lake and the impressive array of peaks beyond, from Borestone and Baker mountains to Lily Bay and Number Four mountains. There’s Elephant Mountain and Indian Mountain, too, and the multi-summited ridgelines of the Barren-Chairback and White Cap ranges, as well as a whole host of other hills and mountains.

Move just a little farther north to get a look at the iconic cliff face of Mount Kineo, Little Kineo Mountain, Little and Big Spencer mountains, and then, some 50 miles distant as the crow flies, glorious Katahdin, the sharp profile of neighboring Doubletop, and other high peaks on the southwest side of Baxter State Park. If you’ve got the Peak Finder app on your phone, you can easily identify many more mountaintops.

Big Moose Mountain, reached by a moderate 2-mile hike, is the predominant natural feature of the Little Moose Public Land unit. This land unit is 15,000 acres of wild but accessible country that straddles the town lines of Big Moose Township and Moosehead Junction Township just west of Greenville. A 16-mile system of foot trails winds through the land, connecting a series of ponds, outlooks, and summits. These trails allow for not only some fine day-hikes, but some sweet backcountry camping, too. 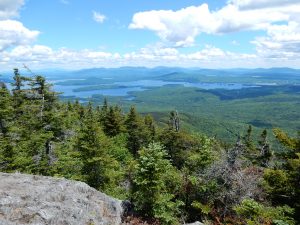 The top of Big Moose Mountain is the site of the first fire tower ever built in the U.S., a 22-foot wood and log structure erected in 1905 by the M.G. Shaw Lumber Company. That tower was replaced with a 12-foot steel structure in 1919, which remained atop the mountain until it was removed in 2011. Only the concrete stanchions and some eye bolts remain as a reminder of this bygone era of forest fire protection, which lasted until 1991. 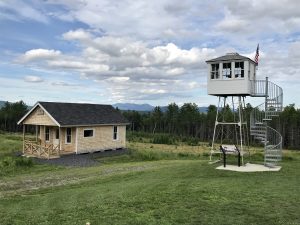 A good book to be aware of, if you are not already, is From York to the Allagash: Forest Fire Lookouts of Maine 1905–1991, by David Hilton. (It was published in 1997 and is now out of print, but copies are still findable, if at a premium.) As this book says of the fire towers, “They stand alone on the mountaintops of Maine, a reminder of the days when the ‘guardians of the forests’ stood tall against the menace of forest fires.”

You have to admire the men and women who dutifully staffed fire towers like the one on Big Moose Mountain over the years, ever at the ready to identify and report a fire in the effort to safeguard Maine’s vast forestlands. It had to be a hard life, living and working in such remote conditions for half the year or more. But it was also, one suspects, a satisfying life nonetheless, enjoyed amid the daily natural rhythms of the Maine woods.

Of the 144 towers that were erected around the state, just 55 remain standing today, according to records kept by the Maine Chapter of the Forest Fire Lookout Association. Of these, only 24 still have the cab on top, and only 11 of those are reported to be in good condition. This rich part of Maine’s outdoor heritage is fading away, slowly but surely.

The old Big Moose fire tower isn’t lost, however. It was reassembled in 2015 adjacent to the Moosehead Lake Region Visitor Center on Route 15 on the way into Greenville. A replica of the fire warden’s cabin was added last year. Both are worth a visit, and there’s a great view of the mountains from there to boot. 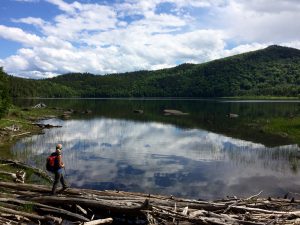 In addition to a climb of Big Moose Mountain, you might also try hiking the Loop Trail into Big Moose and Little Moose ponds, where there are three tent sites if you’re so inclined. Both ponds are lovely spots that offer a look at the long ridge of Little Moose Mountain. The Notch Trail leads into Little Notch and Big Notch ponds. Each has a pretty campsite as well.

Little Moose Mountain is a great hike, and if you traverse the entire ridge (you’ll need a car spot), it’s a healthy 6-mile walk. Also, not to be missed is the undulating 3-1/2-mile trek, one-way, to the airy pinnacle of Eagle Crag. It affords spectacular 360-degree views, and Raven Ledge, en route, is a bonus.