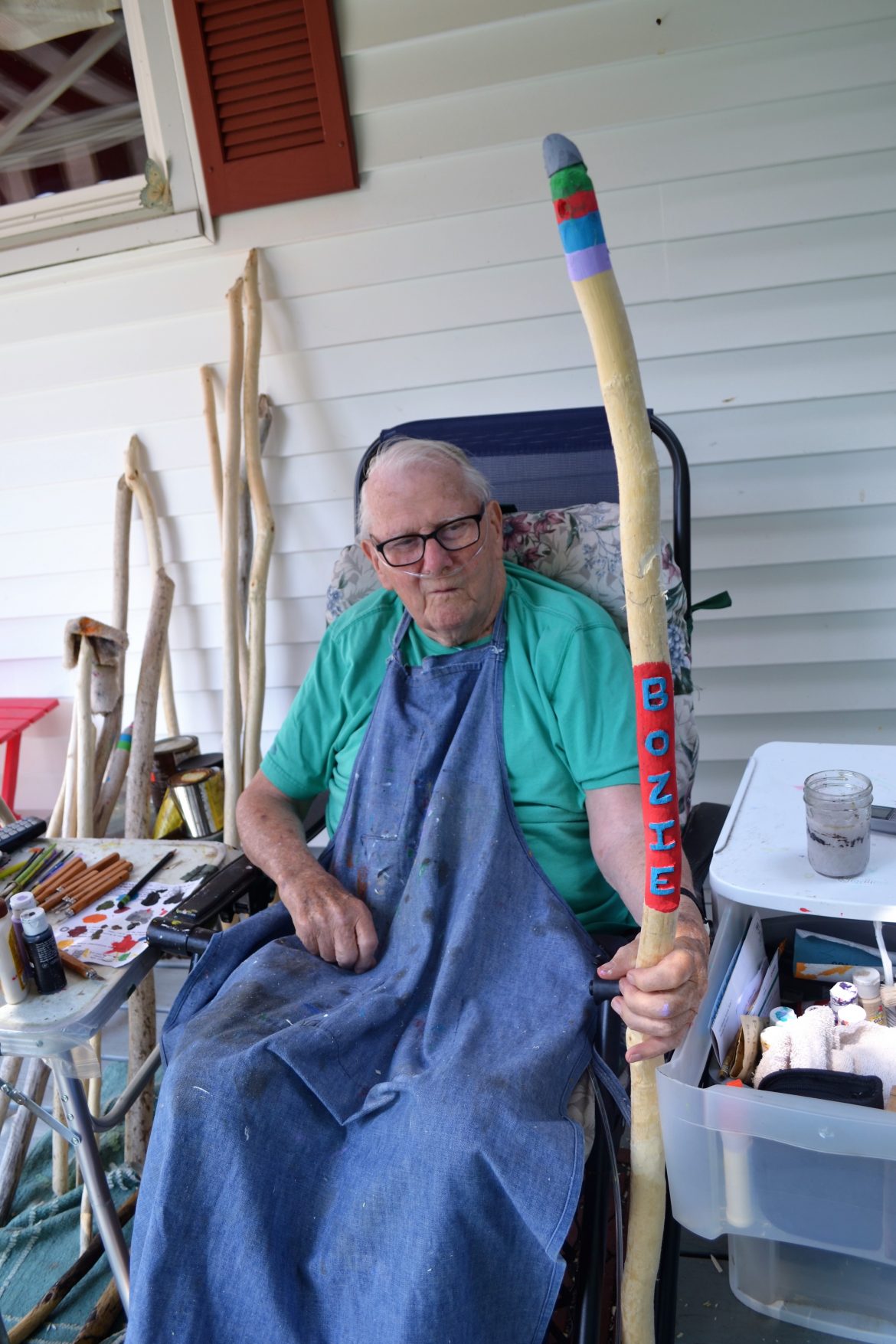 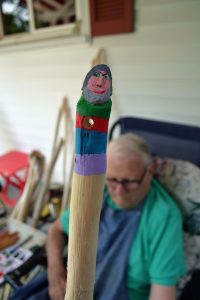 Years ago, Lester Sprague and his wife, Harriet were visiting Duck Lake in Northern Hancock County. “We were walking along the shore and saw this beautiful stick washing back and forth along the beach,” he says. “I picked it up and saw that it was a beaver stick. I ended up bringing it home and carving my wife’s initials into it.”

From that point forward, Lester knew he had a cutting edge when it came to carving. “Beaver sticks are the best because the beaver does the first half of the work, and I do the second,” he says.

On days that are warm enough to be outside, you’ll find Lester and his collection of beloved beaver sticks on the back porch of his home in Otis. HIs work space consists of a large, camping chair overlooking flower gardens and bird feeders. To his left- a plastic drawer cart filled with paints and rags. On his right, a table holding Lester’s paint palate, brushes and collection of carving tools. “I’m all set up here,” he points out, proudly.

At 90-years old, Lester understands the value of time. “When I’m out here working, next thing I know it’s dinner time,” he says, picking up one of his whittling knives and examining it for sharpness. “I usually try to take a nap in the afternoon but sometimes I forgo that when I get busy. Age has got me tied up but this keeps my mind moving.”

Lester angles the sculpting knife against the soft, smooth wood of the beaver stick and begins to chisel. Soon, a pair of butterfly wings emerge on the middle section. He’s already carved the name of the recipient in block, 3-D letters. A carved cross is on the bottom portion of the stick. “She’s pretty religious,” Lester comments about the walking stick recipient. 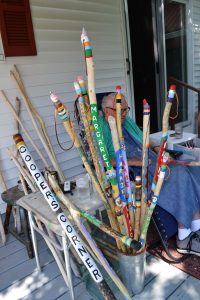 Once the carving is complete, Lester will paint the sticks in bright colors and then coat them with acrylic. Each stick boasts a brightly colored gnome head at the top of it and a leather strap for hanging. But after that, no two of the more than 50 sticks that he’s made, are alike.

Lester gestures to a metal pail next to him. Walking sticks of all sizes sprout out of it. “The smaller ones are for the kids,” he explains. “I’ve got seven grandchildren and 11 grandchildren. All of them have walking sticks except for the last. And that’s because he was just born today,” he adds chuckling. 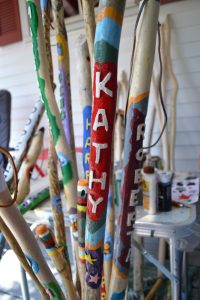 Lester doesn’t charge for the sticks. In fact, those receiving one have no clue. “Although they might know now if they see the pictures in your magazine,” he grins.

Janis Frost is among the lucky recipients of Lester’s carved creations. “He’s my dad’s younger brother

and the only one left in that generation,” she says. “His mind is shaper than mine. My dad was that way too, right up until he passed away two years ago.”

Janis recalls coming to her uncle’s home to watch him work. “I was just praising him up and down for making them and suddenly, my cousin Kathie tells me to sit down,” she says. “She comes out from around the corner holding a walking stick that he had made for me. I just lost it.”

“We’ve had some emotional ones indeed,” Lester says humbly. “They just can’t believe I did this for them.”

Woodwork was never a profession for Lester, only a past time. “I was a pipe fitter,” he says. “I had a Maine Master Plumber’s license.”

Still, he built a house for he and his wife. “Needed a power saw for that,” says Lester, matter-of-factly. “After that, I used the power saw to build me a shop down back.”

That shop is now where Lester saws, sands and grinds his stash of sticks to prep them for carving. “I can’t go down there by myself anymore,” he explains.

Lester gestures over to his daughter, Kathie Clark whose sitting nearby. “Not only is it doctor’s orders, but daughter’s orders,” he chuckles. “I’m restricted.”

Kathie smiles at her father, acknowledging the back handed comment. For more than a year now, she’s been living with her dad who’s on oxygen 24 hours a day.

“My wife died in January,” says Lester. “We were married for 67 years. Kathie’s my oldest daughter and she watches over me pretty good. ”

“They had a wonderful, wonderful marriage,” adds Kathie. 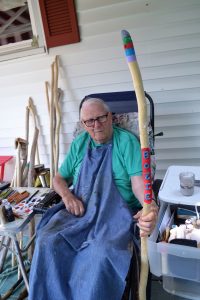 Lester reaches into the bucket and pulls out a walking stick. The name ‘Harriet’ is carved into it but the rest is bare. “I just wasn’t able to finish it before she died,” he says quietly, gently rubbing his hand over the raised letters. “But I plan to. One of my daughters wants it so I’ll carve her name on the back of the stick.”

“The way he takes the time to personalize each one,” adds Kathie. “We’re just so proud of him.”

“Anything I make is a jewel to the girls,” adds Lester, smiling.

Kathie is one of Lester’s four daughters. Her younger sister, Chris Donavan owns a kayaking business with her husband. They’re responsible for finding most of Lester’s beaver sticks. “They have a special spot which she won’t disclose,” Lester says, laughing. “You can only get the sticks in the spring.”

“It means the world to me that he made a walking stick for me,” says Janis. “I’m not going to use it for functionality, it’s an heirloom. I’m so pleased that he found this passion and isn’t just sitting in his chair.”

Lester grins as he brushes wood shavings off his lap. “I work on the sticks every good day that I’m out

here,” he says, readjusting his whittling knife on the wood. “This is exactly where I want to be.”