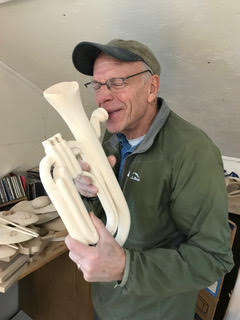 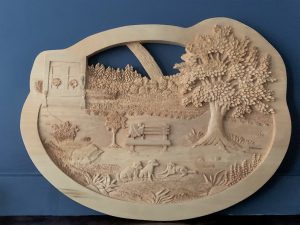 “I wasn’t really sure I could, but I felt compelled to try,” says Dr. Eddie Harrow of his woodcarving passion. He calls himself a Maine Woodcarver. But if you were to see any of this man’s distinctive, detailed work, you would call him an extraordinary artist.

Eddie is a retired physician, who practiced at Northern Light Eastern Maine Medical Center and St. Joseph Hospital in Bangor. Born and educated in New York City, he has lived in Maine since 1975, specializing in pulmonary and critical care medicine for nearly 40 years. He developed a keen interest in the arts when taking art history courses in college.

“I have always admired the great painters, sculptors, and cathedrals,” he says. “My favorite painters are Jan van Eyck, a Flemish artist from the 15th century with his extraordinary and exquisite detail, Vincent van Gogh with the near sculptural way he builds up the paint on his canvases and, of course, Michelangelo.” Harrow has come to respect carvers as well, “My favorite is Tilman Riemenschneider, a German sculptor of the late 15th to early 16th centuries. I could talk about him for hours.”

While he is in awe of these artists, others are enthralled by Eddie’s work.  His love for wood working started early on, “I had always done some wood working, having learned basic techniques at summer camp as a youngster. Through the years I have made a number of pieces of furniture like a dining room table, sofa, bed headstand, hutch, and coffee tables.” These pieces are in use each day in the home he shares with his wife Maxine.

When you visit the Harrow’s, you are treated to beautiful art on the walls and table tops graced with works from all over the world, which blend with of Eddie’s pieces on display. The couple’s world travels have allowed Eddie to share his medical skills and to appreciate a wide range of arts in return. They have gone to Southeast Asia, Indonesia, India, and Guatemala, among many other places. As Maxine shows a visitor around the art in their home, she talks with appreciation of the varied talents from other lands, adding, “Woman with their intricate weaving and needlework are truly unsung artists.” 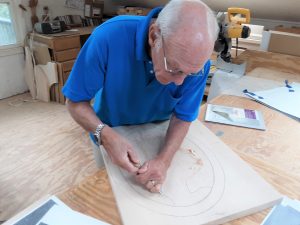 Some 25 years ago, Eddie took a chisel in hand and began creating, after seeing Native American art in Vancouver. “I didn’t quite know how to begin, so I bought a book on Northwest Native American work and found the very simplest piece (an oar containing several stylized images). The Native American piece was [so-called] ‘primitive art,’ and I thought it wouldn’t be too difficult.” Recalling his learning process, he continues, “Was I ever wrong. I soon realized what terrific artists the Native Americans were, despite their two-dimensional designs.”

The interest in carving also took him abroad. “A nephew lives in Thailand, so when visiting I took an individualized course with a master carver and toured some of Southeast Asia where great carvers seem to grow on trees.” He goes on, “Thailand was clearly special with one-on-one instruction. I was outside under a canopy listening to the birds, looking at the vegetation, and after ‘school’ I visited the local Buddhist shrine and walked along the rice paddies as the sun went down. Oh my, that was carving nirvana!”

Eddie’s workshop is over his garage. There, he explains how he goes about creating. He gets ideas for where to begin, he says, “Usually from images I see and paintings or photos I’ve taken. And sometimes from suggestions from Maxine, as she is an effective and valued critic, as is my daughter, who is quite discerning as well.”

With that image, he makes a series of enlargements to achieve the appropriate size, with size often determined by the location where the piece will be placed. His preferred carving wood is basswood because it is the softest of the hardwoods and is also less likely to split or warp. Eddie is able to buy his wood locally. Then he aims to match the grain of the wood as he glues a panel of boards and planes and sands them down to achieve a flat, even surface. Next, he places carbon paper on the panel and then overlays the image, a repeated practice throughout his carving. 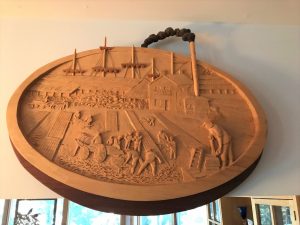 Eddie goes on, “I use a stylus to transfer the image outline onto the panel and can then begin carving. The carving always changes in the course of doing a piece. And faces and hands are always a challenge.”  Of his carving method, Eddie says, “I use either a series of rotary drills or a set of gouges, depending on what I am trying to achieve. Some images can be crafted more successfully with one type than the other, but I prefer using the gouges since they achieve a sharp discrete line. That line is key since light bounces off of it much more readily and gives the image great dimensionality, even if the depth of the image is only a millimeter or two.”  Pointing to his tools, Eddie laughs in saying, “I have a million tools but really only use about six.”

Jan Pilotte worked alongside Eddie in the medical field and always admired his work on display at the American Folk Festival over the years. “He almost finds the place in your soul while developing the concept for the piece and then turns the results of that journey into a beautiful work of art,” she reflects. She commissioned Eddie to make a carving for her. “In my piece, he was capable of taking my feelings of joy and sadness through the pictures I sent him. Yes, it is a beautiful piece of work, created by a man who was able to see what I was looking for and even at times to see what I was not able to see.”

“I find Eddie to be warm and genuine, and his work amazes me,” says Candi Joyce of the Bangor Public Library. She has curated several exhibits of his carvings. The first was from December 2019 to January 2020, and this year his work is part of the 2021 virtual exhibit series based on the theme “Hope.” 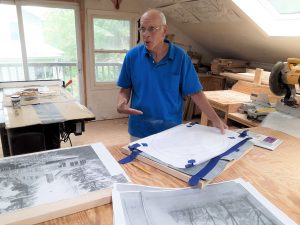 One of Eddie’s magnificent works is displayed in the Northern Light EMMC cafeteria. It is a four-panel, bas-relief mural depicting historical scenarios. Bas-relief is a technique in which the subject of the sculpture emerges, attached, from a background of the same material—yet appears to be raised and separate from that background.

Eddie says, “The history of Bangor, entitled ‘Penobscot Voyage,’ features the captain of a sailing ship traveling the river of time. This piece is 17 feet long, took 1000 hours, and went through four versions before I had a clear idea of what I was going to do. A lot of stories go with that piece—some poignant and some funny.” He adds, “The murals are always fun and a challenge. And it’s very satisfying to see my work hanging on a wall,” adds Eddie. 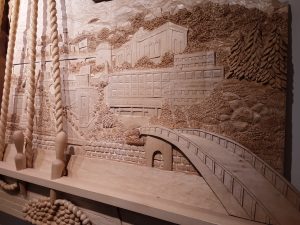 Fellow woodcarver Rod Chelberg helped with this commemorative work. The two met eight years ago when Eddie attended the Bangor Woodworking Association. “His work is very crisp and clean which requires a great deal of skill.” Rod is among many craftspeople and artists who lend a helping hand on Eddie’s mural projects.

Now in his sixth year of retirement, Eddie admits he’s sometimes working around the clock, at odd hours. “I often work things out in my head between 2 and 4 a.m., when I can’t sleep. Maxine doesn’t necessarily appreciate this schedule, since I often ask her advice then and there.”

Eddie has completed over a hundred carvings, along with ten major pieces. He invests up to four hours daily in carving, marking the back of each piece with a tally for each hour. Thinking back over all the works he has created so far, Eddie does have a favorite. While visiting a museum in Europe, he was captivated by a Roman mosaic depicting one of the daughters of Neptune, God of the Sea. “The work was just stunning, and I couldn’t leave it, even as the tour I was on at the time moved on.”  Today, his carving of the daughters of Neptune hangs on his living room wall.

Eddie does not still have possession of all of his carvings. He says, “When I first started, I wasn’t ready to part with any of my pieces. Now, doing so helps me feel validated, and there are only a few I am not ready to part with.” 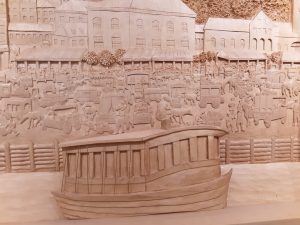 On the home front, Maxine considers her husband’s works family heirlooms, saying, “Two pieces that I treasure are scenes of the kitchen and family dining room in our former home, a farmhouse in Eddington that we lived in for 30 years. Those bring back wonderful memories when our children were growing up.”

For more information on Eddie Harrow and his wood carvings, please visit https://eddieharrowmainewoodcarver.com/.