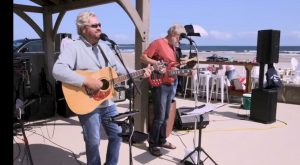 When Don Campbell and his bandmates performed recently at the Deertrees Theatre and Cultural Center in Harrison, they saw a sea of smiling faces in the crowd—more than 200 patrons had gathered.

Deertrees, built in 1936 for Broadway actors who were seeking relief from the city heat, was the perfect venue for the airy summer concert. The Don Campbell Band is familiar with hundreds of other great places to play around the region. During a typical year, the band plays 200 to 300 shows throughout Maine, New England, and elsewhere.

As they entered the new normal of 2021, Don wondered if that would be the case. “We were concerned that a lot of venues might not be able to reopen,” he said. “We’ve been very fortunate that a lot of our favorite places to play came back.”

For more than 20 years, Don has been a full-time musician, so popular here in his home state that he has had to turn down gigs. Don shares that good fortune by giving back, performing benefit concerts that help many. The band has performed a lot of veteran’s appreciation concerts. Don also composed and performed the theme song for the Maine Wreaths Across America event. At this event during the holiday season, Maine Christmas wreaths are placed on graves at Arlington National Cemetery, to honor those who made the ultimate sacrifice.

This summer the Don Campbell Band was scheduled to do a new kind of benefit. On August 28, 2021, they were scheduled to perform a self-produced benefit concert in Casco Bay, on a floating barge near Cow Island in Falmouth. It was called The Flotilla to Fight Cancer, and it “is the first cancer fundraiser we have ever done,” Don explained. 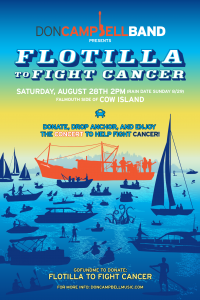 Boaters were invited to anchor in the bay, enjoy great music, and make donations to the Maine Cancer Foundation (MCF). MCF provides funding and support to help cancer patients and their families afford and get through cancer treatment. The benefit was conceived by Don and his manager, Kristen DeQuattro. Don, who was born in Portland and lives in Scarborough, is an avid boater. He felt it was important to perform this concert, on a barge in Casco Bay, for this cause.  The event required approval from the Coast Guard and the Portland Harbor Master.

“We have been surrounded by so many people, family, friends, and even my own bandmates who have been stricken with cancer. We feel very lucky to make a living playing music, and . . . you want to give back,” Don said when we spoke, mid-July.

Helping in the fight against cancer is a cause especially close to Don’s heart. “My dad died of cancer in 2009, and my mom, who is 83, has terminal cancer. She only has months to live. I see her every day and take care of her every day. I have promised her that I would use my music in a very positive way to help others,” Don said.

Don said his drummer, Gino Grassi, was diagnosed with prostate cancer and had his prostate removed.

Dan Fogelberg, a strong influence on Don’s music, also died from cancer. Don released a double CD album on which he performs Dan Fogelberg’s songs as a tribute to his friend. Officially endorsed in April, 2014, by the Fogelberg Association of Peoria, Don and bandmates tour the country performing An Evening of Dan Fogelberg Music.

Don knows that cancer is a disease that affects many people and can strike at any time.

“It’s everywhere,” he said. And it creates a reminder that inspires Don’s music. “Every day is a blessing. Our music is filled with positive, uplifting music,” he said.

When the show was announced, donations started flowing in for Maine Cancer Foundation, via the GoFundMe page set up by Flotilla to Fight Cancer organizers. In advance of the show, Don expected it would attract anywhere from 50 to 60 boaters. If any group can make a floating barge concert a success, it is the Don Campbell Band, whose leader embodies warmth, joy, and kindness for his audience. This positive approach remains steadfast, whether his band is playing a gig at the Stone Mountain Arts Center, welcoming cruise ship passengers in Portland, or performing at smaller-scale events like York’s Harvest Festival.

What audiences discover is that Don has a unique and uncanny ability to sing comfortably in the tenor range of Vince Gill, Chris Isaak, or Dan Fogelberg, and go easily into the sub-bass vocal level range of country greats Josh Turner and Johnny Cash. Don’s music is “American crossover,” akin to the Eagles and John Cougar Mellencamp.

Don is a six-time winner of the title, “Maine’s Best Singer-Songwriter” from the Maine Sunday Telegram’s Annual Reader’s Poll. He has also received recognition for his Double CD Release, Kites to Fly—Celebrating the Music of Dan Fogelberg.

Don’s mandate is “always perform for the audience, never at them.” He is a talented multi-instrumentalist, playing acoustic guitar, piano, Hammond B3 organ, bass, electric guitar, nylon string guitar, mandolin, and harmonica. His mastery of these instruments is impressively showcased in his latest album, The Dust Never Settles.

As much success as Don, 57, enjoys, he acknowledges it was a long road, as it is for many musicians who dare to pursue their dreams. He attended University of Southern Maine, and paid his share of dues when he bartended at DiMillo’s restaurant in Portland for three years. He later worked for Blue Cross Blue Shield for a while.

Don said he started as a solo folk artist and was influenced by groups like Schooner Fare and Devonsquare. But Don was always drawn to forming a band because he grew up in a very musical family that performed Celtic music.

When Don entered his late 20s, he decided to move to Nashville, Tennessee. He lived there for 14 years, and his time in Music City greatly influenced his career.

One time, Don recalled, he met Johnny Cash. He said he was boarding a flight and making his way to the coach section of the plane when Cash, who was seated in first class, spied Don’s guitar case slung over his shoulder.

“Where did you play?” Cash asked Don.

Don said Cash extended his hand, which was the size of a baseball glove, and shook Don’s hand. “That place is like my living room back home,” Cash grinned.

Don’s time in Nashville culminated with a $50,000 grand prize at the Grand Ole Opry with his original music and a grand prize custom Gibson Les Paul guitar from the Jim Beam’s Back Room Band Search.

As much as Don loved Nashville, he longed for Maine and frequently spoke of his home state to anyone who would listen.

Don Campbell has made his living as a full-time musician with his band since 1997, releasing 14 CDs and composing a great many songs and ballads. He has also released two Christmas CDs.

While some people may see Don as Maine’s ambassador, he simply says that his love for his state and for his fellow Mainers is sincere, and he isn’t shy when asked about it.

“I just love Maine. Maine is an easy place to brag about and to promote,” he said.

Like many great songwriters, Don draws his inspiration from talking with people to understand what they are going through. He especially likes talking to seniors because they have lived through so many important events, like the Great Depression and World War II.

Don never takes his following and fan base for granted. The COVID-19 pandemic, which forced the band off the stage for a year, showed Don how quickly things can change.

“I’m an optimist, and through music we can make positive things happen,” Don said.

To learn more about the Don Campbell Band, visit doncampbellmusic.com.