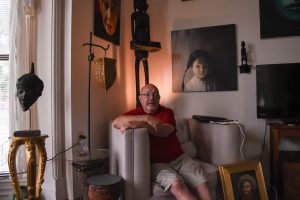 Ten or so years ago, Bill King’s life was all about loss. From his parents to a home he’d built, it seemed that more was leaving his life than entering it. Now, it’s about what Bill has gained, particularly through his paintings, portraits of fellow Mainers, including those that celebrate what makes people special.

A lifelong Mainer, Bill spent his childhood in Raymond where his parents owned a makeshift boardinghouse.

“My parents were very, very generous people,” Bill said. “In 1957, they bought this huge house in Raymond Village and turned it into a boardinghouse. They welcomed everyone. They had elderly people, people with disabilities. We had a couple of people in wheelchairs.”

Bill was adopted as a baby. Four years later, his parents, Chester and Hazel, adopted Bill’s biological brother. Sadly, when the family relocated to the boardinghouse, the boy, then six, ventured down to the river and drowned.

“It was a terrible blow,” said Bill.

Despite such heartache at an early age, Bill said his was an idyllic childhood.

He was inspired by both his parents, learning from his mother the joy of giving, and from his father, the thrill of learning and creating. His parents encouraged his creativity, which emerged as rough paintings during his youth. It wasn’t until his father was dying of cancer in 1979 that Bill’s real talent for portraiture shined. Bill wanted to be by his father’s side but needed a way to keep occupied. Bill snagged a copy of National Geographic, deciding to paint one of the many faces.

“I picked the face of an old miner,” he said. “While I was painting, I was aware the entire time that my father was suffering.”

Bill channeled the difficult emotions into his artwork and was stunned with the result. 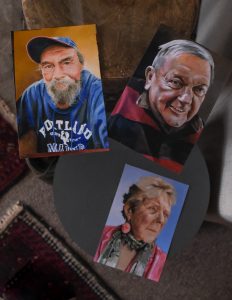 The likeness was incredible, ideally capturing the furrowed brow of the Middle Eastern miner, with a face weathered from a lifetime of physical labor. Bill said that was when his paintings changed. Prior to that portrait, Bill said the faces he’d painted lacked emotion. This one was different.

“It showed something,” Bill said. “It showed that I was able to at least put some emotion on the canvas, so it wasn’t flat.”

With a renewed zeal for his craft, Bill, who is entirely self-taught, pored over books on technique and experience, studying the works of artists he admired, such as Chuck Close. It was the works of Close that inspired Bill to “paint large,” on sizeable canvases. His first attempt came after Bill met a man in Lewiston, his first subject, a man named Walter.

In 1998, Bill joined the team at Maine Woodworks as a designer, where he worked full time for more than 25 years, and still goes in for a day-and-a-half each week. Working with a diverse team that includes people with disabilities, Bill said, was something of a calling inspired by his parents.

Not long ago, Heidi Howard, Creative Works’ executive director, came up with an idea to honor program participants by having their portraits painted, and hired Bill to do the work.

The first 20×30-inch painting was of Scott Bogdon, someone with whom Bill has worked at Maine Woodworks for years. Bill brought his now digital camera in to photograph Scott. Since Scott wasn’t big on smiling for the photo, Bill had someone tell Scott jokes to make him laugh. The resulting portrait clearly shows Scott’s playful essence, his smile wide and joyful.

Though Bill has been asked to paint portraits honoring people who have passed on, he prefers to work with living subjects so he can meet them and gain a sense of their personality.

“I get a feeling about them, usually positive,” he said with a grin. 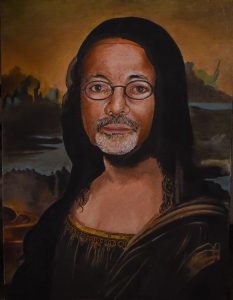 To start, he takes dozens of photos and works from whatever one most closely represents that person. His studio is a tall bay window in his Portland apartment in front of which pulls his easel so he can see out when he sets to work. The painting process can take days or even months, depending on the subject and Bill’s approach. Sometimes he paints for ten minutes, while others he’s immersed in his work for six or seven hours.

Bill also uses numerous tricks to create the final piece. He paints upside-down at times, and he pays sharp attention to where he wants the viewer’s eyes to go. For example, in one he recently unveiled at Creative Works, he wanted the woman’s eyes, particularly the right, to be the focus. The result is an almost photographic recreation of her wide smile and dancing eyes.

He has also done several portraits for Disability Rights of Maine, including one of a woman named Helen, whom Bill recalls fondly. She sat for photos on Mackworth Island, explaining how much she detested having her photo taken.

“By God, she really meant it, too. She had the sourest expression,” Bill recalled.

Bill took a dozen or more photos and none pleased him, so he suggested they take a break. Suddenly, the woman relaxed as she gazed out at the water, her face in profile. Bill grabbed his camera and snapped the image, the ocean reflecting in her eyes. It became one of his favorite portraits.

The first portrait he was commissioned to paint was of an elderly man in Biddeford. Before that, he’d done a painting of a friend reclining on a dock in the sun, the sparkling waters of Raymond Pond glinting in the background. He also painted a portrait of a homeless man, who was initially skeptical of the idea.

“I asked him one day, ‘Would you mind posing?’” He grumbled about Bill wanting to “paint the homeless guy,” a notion Bill shut down immediately. “I’m painting somebody because I like their face.”

Before delving into portraiture, Bill was something of a jack of all trades. He had an article published in Harper’s Weekly and has written two books, one about his experiences growing up in the boardinghouse, and another inspired by Edward Gorey that he also illustrated.

He built his own home in Raymond, as well. Dubbed “The Castle” for its towers and unique design, it was a 25-year labor of love that included a spiral staircase, bronze statues, and magnificent furniture. Then Bill fell off the staging, plummeting three stories and breaking his back.

“Then the bills started piling up and there were lien fees on the taxes and before I knew it, I was over my head,” he said.

Bill ended up not only having to sell the house, but everything in it, as well. That was one of the losses Bill struggled with until his life underwent a sea change, captured in layers of paint on canvas. One of the highs that followed the lows was having a portrait hung in the Portland Museum of Art.

Fran Peabody was a philanthropist who gave substantial funds for AIDS research, holding an auction each year that was aired on Channel 13. Bill used to give paintings for them to auction off. At some point, Bill got the idea to paint Fran.

“I went over and photographed her in her mansion. I probably took 50 pictures. I knew the one I wanted. She had the look of a wise woman. I marked an X on the back of the photograph,” he said.

Bill asked her to select the photo she liked, and darned if she didn’t pick the same one. A friend of Bill’s bought the finished painting, but months later asked Bill if he would mind if the portrait was donated to the museum. His rationale was that the only people seeing it were the few that came into his office. He felt it should be seen by far more.

“I really didn’t think they would take it because I don’t have a recognized name,” Bill said.

The vote to install it ended up being unanimous.

“It was a great thrill to see my name on a plaque and the painting hanging on the wall of the museum,” Bill said.

He even painted a portrait of Maya Angelou that hung in her house until she died. Bill has no idea where it is now, but said he corresponded with her briefly regarding the work.

“My outlook is a little different every time I come back because I’ve experienced a different culture,” he said. 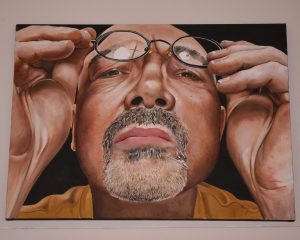 His apartment is decorated with numerous collectibles from his adventures, his favorites are a Mayan beer glass and a small wooden tree frog, carved for Bill personally.

Bill, who has attended Green Memorial AME Zion Church in Portland, credits his faith and his family for instilling in him a sense of gratitude and an appreciation for others, regardless of ability.

As he eases into something of a retirement, Bill said painting is his happiest work.

“This is the perfect job, this portrait job,” he said. “How better to celebrate somebody than to do what was only attained by very wealthy people in the past who could hire someone to have a portrait done. You know those portraits are going to be around for hundreds of years.”