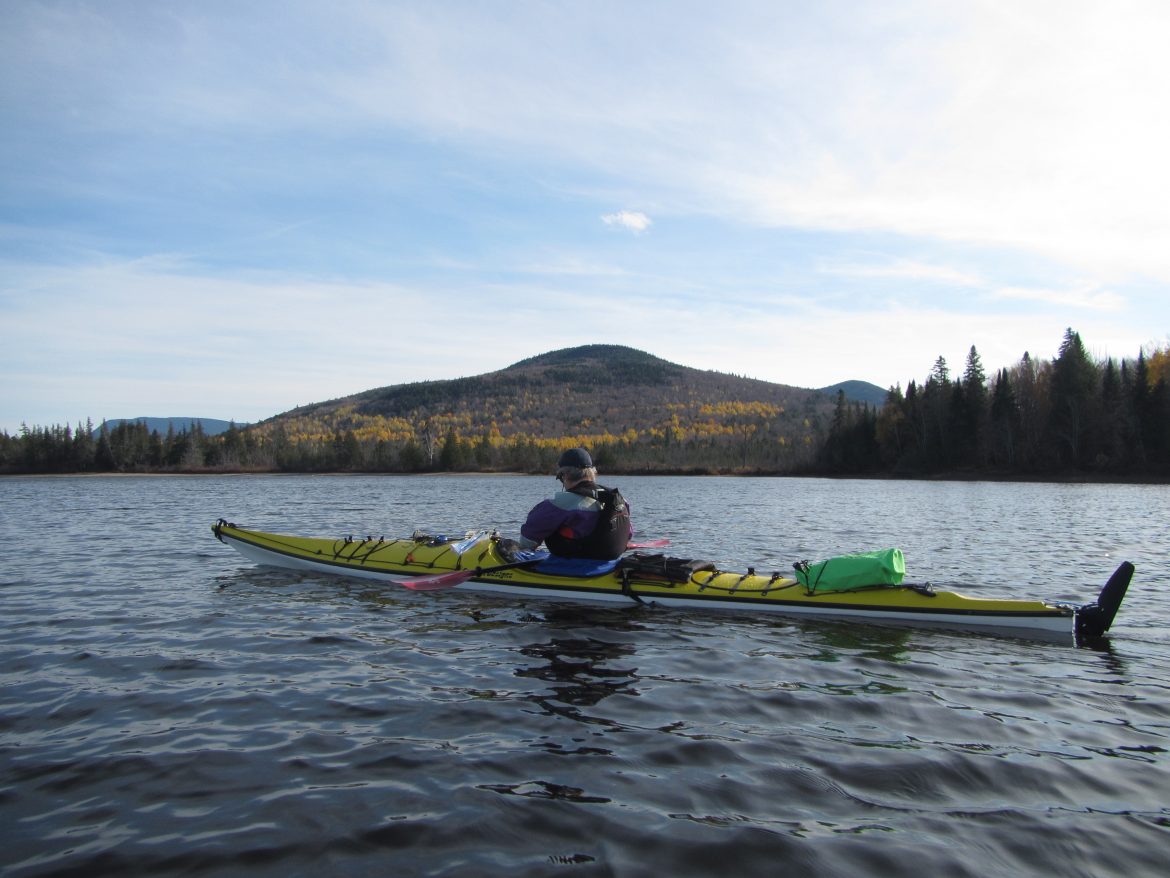 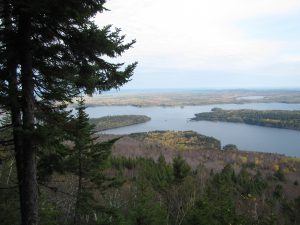 When I heard there was a hiking trail to the summit of Lobster Mountain, I resolved to return to nearby, remote Lobster Lake for an attempted climb. The pristine body of water with a unique shoreline is located northeast of Moosehead Lake in northern Maine. Letting your imagination soar, it’s shaped something like an asymmetrical lobster. Both a destination for outdoor adventurers and a popular stop on the iconic West Branch of the Penobscot River canoe trip, I had been there twice but never realized Lobster Mountain existed – more proof there is still much for us old folks to learn.

My first visit to Lobster Lake was an overnight stop on the multi-day canoe trip. Arriving at the most accessible campsite on Ogden Point in the dark on a cold fall evening, my brother-in-law and I departed early the next morning without enjoying the benefits of the picturesque tarn. A few years ago, I returned with three Penobscot Paddle & Chowder Society (PPCS) Chowderheads intent on exploring the entire lake during a three-day visit. Powerful northwest winds kept us marooned on Ogden Point for the entire stay.

Intent on a return, I scheduled a three-day fall surf and turf PPCS trip to Lobster Lake and Mountain. The proposal received substantial club interest. Unfortunately, inclement weather resulted in postponement. A few days later, three acceptable weather days were identified. With such short notice only my retired friend, Jean Miller, was able to quickly adapt to the new timeframe.

You can’t get to Lobster Lake from here. More accurately, it’s not easy to get there from any location, as all routes entail extensive driving on rough logging roads. In the past, the predominantly paved logging roads leaving from Millinocket were the best of the bad choices. Not anymore — the erstwhile paved section of the Golden Road was an unrelenting succession of lapses in pavement, potholes, ruts, and pooling water. Heavy rain and snow the previous day worsened conditions. After paying day-use and camping fees at the North Maine Woods Caribou Gate, our drive mercifully ended at a boat landing on Lobster Stream at the confluence with the Penobscot River. 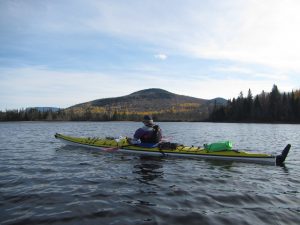 Paddling solo sea kayaks against a modest current on Lobster Stream with cloudy skies and cool temperatures, our quest began by navigating about 1.5 miles to Lobster Lake.  Entering the lake, prominent Lobster Mountain was observed almost due south. Our research indicated Lobster Mountain Trailhead originated at a campsite in Jackson Cove, located south of Ogden Point, an additional two miles. Calm conditions facilitated an easy journey to a spacious site situated atop a steep bank on the southern shore of the cove. Arriving shortly before dusk, our reconnaissance quickly located the trailhead. The strategic location was home for the next two nights.

On the trail early the following morning, the distance to the summit was unclear. Initially hiking through a wide, well-marked path in a mixed conifer and deciduous forest, the route narrowed and steepened in a severely eroded area. Encountering a blanket of snow at higher elevations, we arrived at the 2,230-foot, wooded summit after 1.5 miles. Just below, an east-facing overlook provided a phenomenal panoramic vista of most of the lake. Call me unimaginative, but I struggled to see the shape of a lobster. While lingering to enjoy the remarkable view, our itinerary for an afternoon of lake exploration was plotted. 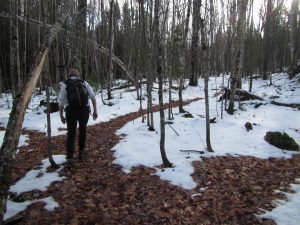 After confronting winter-like weather during the hike, we experienced late-summer conditions paddling on the lake. Kayaking south on Little Claw with sunny skies and a warm light breeze, our first objective was locating a passage between the southern terminus of Big Island and the shore. Indiscernible from the overlook, a narrow twisting channel was found that led to Big Claw on the eastern side of the lake. Turning south, we reveled in perpetual views of distinctive Big Spencer Mountain while traveling to a campsite with an expansive sandy beach at the far end of the claw. Benefiting from a tailwind while cruising north around Big Island, the voyage culminated with a late-afternoon return to the campsite. A full day of adventures behind us, headlights were out early.

A cold, steady rain fell in the night. We endured sporadic showers while quickly breaking camp in the morning. Departing Jackson Cove, gusty winds were confronted during our traverse to Lobster Stream Boat Landing. Choosing a return through Greenville — the roads were worse than the Millinocket route.

The onerous driving was worth the effort. Lobster Lake and Mountain are truly special places.