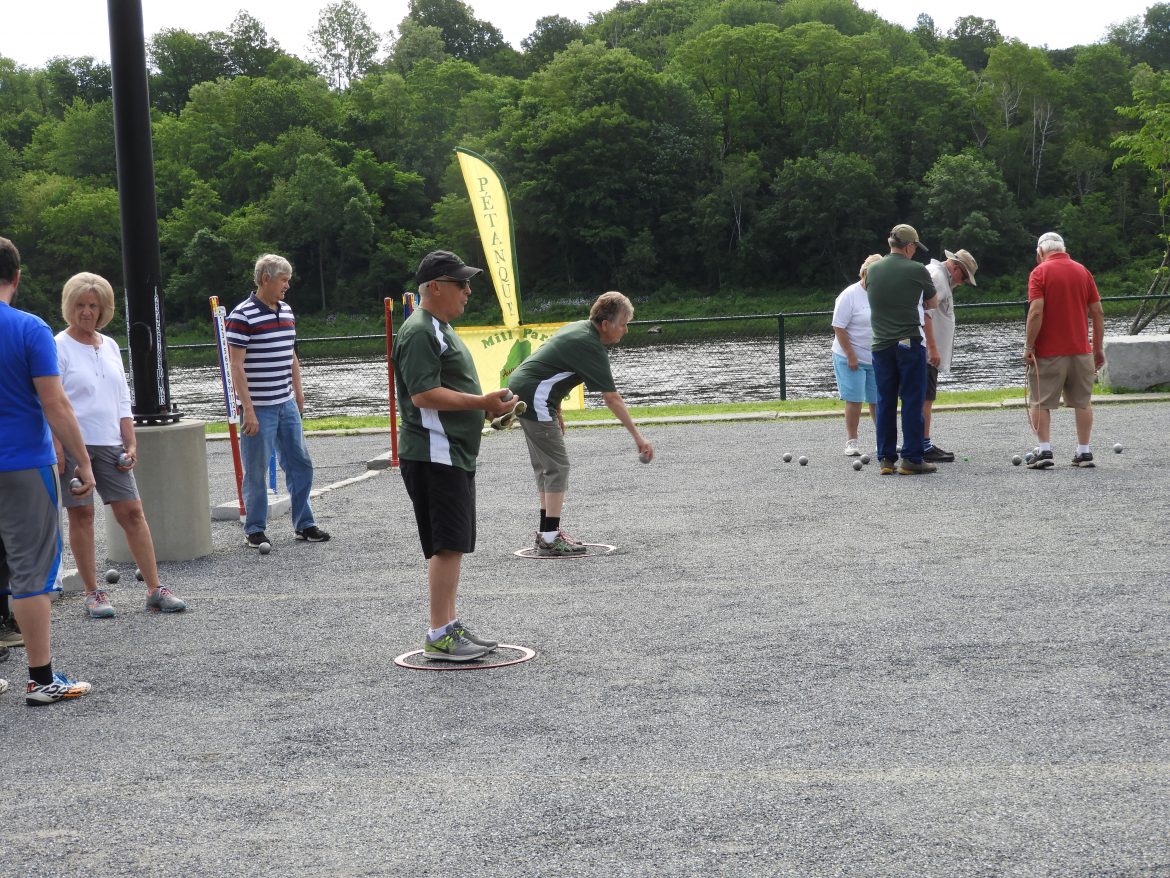 “It was so enjoyable that when I got home, I decided to build a court at my house,” he explains. “My wife and I started to play. The more I played at home, the more I thought, ‘Gee it would be nice to get some other people involved.’ So, we got another couple involved. Then I had the bright idea to approach city hall to see if they had some space they’d be interested in letting me use to build some courts.”

As luck would have it, Ray had the overwhelming support of the Augusta City Council and residents, too, many of whom used to sit in his barber chair. Once his proposal was approved, he wasted no time raising money to create 10 Petanque courts where the former Edwards Mill once stood along the banks of the Kennebec River. The former mill was destroyed by fire back in the late 1980s, and since then the city has reinvented the space into a multifunctional outdoor public recreation area called Mill Park. There you’ll find Ray and many other members of the Mill Park Petanque Club, playing and teaching others about Petanque, a game that was started in the south of France in the early 1900s.

“We play almost every single day down here. We play on prepared courts that look pretty flat but aren’t. That’s done by design. Some of the courts have rocks, just enough rocks to be a nuisance to the ball. If it was perfectly flat, people would be experts all the time. But if you rough it up a little bit or it slopes, the ball will roll to the right or the left, and then you have to read the court. That’s how we play,” the 77-year-old says. 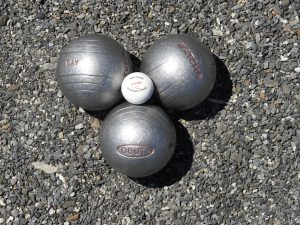 In Petanque, a player tosses a small wooden target ball called a cochonnet which is French for piglet, onto a court which is 4 meters wide by 15 meters long. Teams will then take turns tossing a number of hollow steel balls (called boules) that are approximately the size of a baseball, as close as they possibly can to the target ball. To be more specific, “Team A” will throw out the first boule. Next, “Team B” will attempt to beat Team A’s shot by trying to place their boule closer to the cochonnet. If Team B does not beat Team A’s boule, then they must play a second ball and so on, forcing Team B to play until they beat Team A’s boule. When they do, Team A is now in the hot seat, playing until they beat Team B’s best shot. The team that ends up nearest the target ball when all the balls have been thrown earns a point. The first team to earn 13 points wins the game.

“It’s played similarly to Bocce ball [the Italian outdoor bowling game], except in Bocce you draw a line and have to stand behind that line to throw your ball. You can move to the right or to the left to get a different angle on your pallina, the target ball in Bocce. But in Petanque, we have a circle we have to stand in. Petanque is a derivative from the word petanca, which means feet together. That’s why we use a circle. You put your feet together in the circle to throw your ball. If your ball is closer than all your opponents, you get one point. But if you get two or three balls closer than your opponent does to the cochonnet, you get two or three points.”

Being a fan of the sport, Ray is quick to pass on his knowledge, techniques, and pure love of the game to anyone who shows an interest.

“When people come, we tell them don’t buy any balls, just come and play. I personally own 14 sets and can teach them with what I’ve got. Then if they decide after two weeks, a month, or even six weeks that this is something they’d like to do, then we measure their hand, so they get the proper fit of a ball. We also decide the weight of the ball that would be good for them, and we can order it from Petanque America,” Ray shares with enthusiasm before continuing, “Once you own your own equipment, which costs about $80, you’ll have three balls, maybe a little ball carrier, a measuring tape, and a rag to wipe the balls with. If you play regularly, say once or twice a week, a set of balls should last you about 40 years.”

Dan Howard, who is a member of the Mill Park Petanque Club, began playing four years ago.

“I got interested in Petanque through a friend of my wife who reached out to me, knowing my competitive nature, and thought I would enjoy it,” Dan explains. “I usually play three or four days a week. I have always been social and active, but I love the fact this is an opportunity to get several hours of sunshine and fresh air in a beautiful setting next to the Kennebec River.”

Both Ray and Dan agree, Petanque is a game for people of any age and any ability.

“Our youngest player is 12 years old, and our most senior player is 92. We have quite a few in their 30s and 40s, but most of us who play are over the age of 60,” Ray says. “We don’t have enough young people. We are trying hard to get young people, but we can’t seem to put buttons on the ball and make them roll properly. Kids love to play with those electronics, and they don’t get that good, fresh air from outdoors. It’s too bad. Kids are missing out, and they don’t realize what they’re missing out on. In fact, when I built the courts, I anticipated we’d have people with wheelchairs coming in, so we have a wheelchair ramp for them. In 10 years of play, we’ve only had two people in wheelchairs come. We still talk about trying to get people with disabilities to come play.”

Various adult education programs and the Senior College at the University of Maine in Augusta offer Petanque classes, drawing many new enthusiasts to the Mill Park Petanque courts each year. However, to keep the game going and growing throughout Maine, Ray is doing what he can to pass Petanque on to the next generation. 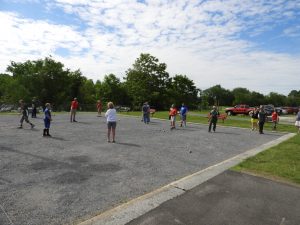 “I’m older than dirt, but I’m young in spirit. I’ve been to a lot of different schools trying to get high schoolers interested in playing the game. But I think what we have to do is get one adult, maybe some of the French teachers, interested and able to play a little bit, so there’s someone at the school who can be there to encourage, coach them, and be an advisor because I can’t be at all the schools,” Ray shares. “I like the aspect of teaching a lot of people how to play the game. In fact, I like to teach more than I like to play. I play okay, but just the enjoyment of getting someone started and watching them improve week after week pleases me to no end.”

For more information on Petanque or the Mill Park Petanque Club, log onto www.millparkpetanque.org. All photos courtesy of Ray Fecteau