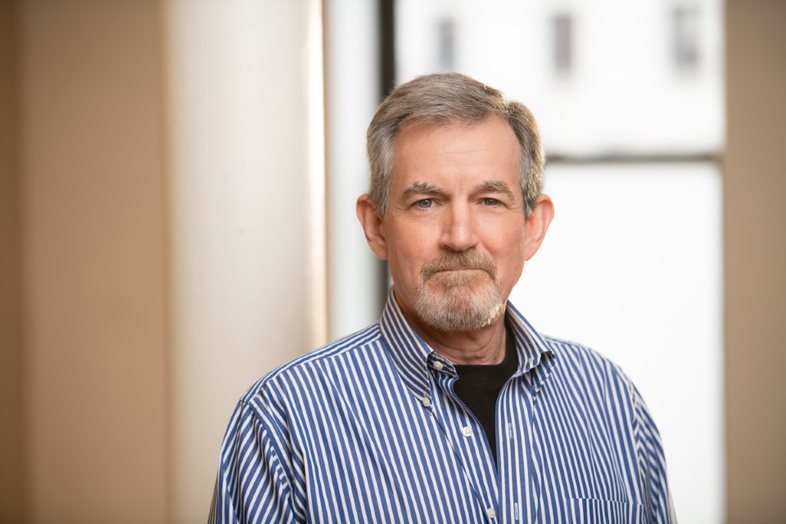 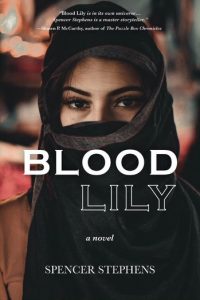 Words matter. Just ask Spencer Stephens, who, as a small child, bonded with his father over storybooks, began to recover from grief while majoring in English in college, and has spent his life making a living, in large part, with words.

Spencer’s professional path includes journalism, a law practice (but always with writing on the side), and now, life as a full-time author. These days, the Belfast resident is busy promoting his second novel, Blood Lily, and loving his gig as a volunteer radio host on WBFY, where his talk show, Books and Writers, focuses on, of course, the weaving of words.

“I was a Navy brat,” said Spencer. “As a little kid I lived up and down the East Coast, in Maryland, Connecticut, and Virginia. We finally landed in Annapolis, where I did most of my growing up, attending middle school and high school—and my mom stayed there for quite a few years after that.”

Spencer’s father was a great lover of books.

“I can remember, when I was a small boy, he would talk about books at the dinner table, getting me and my brother interested,” Spencer recalled. “And, on Saturday and Sunday mornings, if he was not out to sea, my father and my brother and I would be sitting on the floor of our bedroom reading books of all different kinds. Early on, it was Dr. Seuss and stuff like that.”

Spencer recalls his dad as “one of the big influences in my life. He was one of these renaissance men. He played music. He was the front man for a little rock and roll band while he was at the Naval Academy. He rode a motorcycle. And he loved books.”

Sadly, his dad, a nuclear submariner, was lost at sea while Spencer was still a small boy.

“It was a lot of years before I felt I was recovering from that, while I was a college kid,” he said. “As an English major, I got absorbed in books, which was welcome. It allowed me to focus on one pleasant thing at a time and left me feeling restored. Any time you lose somebody that important to you, it sticks with you for as long as you live. I’ve talked to other people who’ve lost a parent, a sibling, or, God forbid, a child. The grief is like a tattoo—it never goes away.”

Naturally, Spencer turned to authors for solace. A piece by Garrison Keillor about how difficult circumstances during childhood, when stuffed down, grow in power, while, “if you remain open and engaged, they shrink,” has been a source of wisdom, Spencer said. “I have always gone back to that.”

Spencer completed undergrad studies at East Carolina University, which he called “the Harvard of Eastern North Carolina.” He completed most of his Master’s in Political Science at George Washington University in D.C., followed by a law degree from Catholic University of America, also in Washington, D.C.

“I started out as a journalist doing work in daily newspapers,” Spencer recalled. “It was some of the most fun I’ve ever had, but it didn’t pay for bupkis. My need for rent and groceries kind of outweighed the fun of the work so I had to look for something more lucrative.” 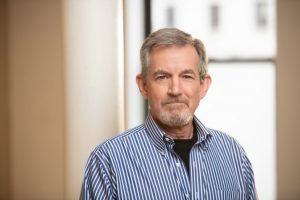 While in law school, Spencer started a small publishing company, and wrote about environmental law. “When I began to practice, I wrote tons of articles on the side about construction law, which was my area of law practice. Then it was real estate law, which I also wrote a ton about.”

Spencer also met his bride of 30 years, Catherine, while in D.C.

“A buddy of mine introduced my wife and me back in the late 80s,” he said. “He invited me with a bunch of his friends from work to go see a movie. I had introduced him to his wife, and I think he felt an obligation to try to return the favor!”

The couple eventually settled in Maryland, but their hearts were always in Maine.

“We love Maine! My wife and I basically fell in love in Maine after we began dating,” Spencer said. “We always enjoyed it and felt comfortable and at home here. My wife had a life-long fantasy of living in New England, somewhere quaint with a town square and a church with a tall steeple and all that fun stuff—so here we are!”

The couple purchased their Belfast home in 2014.

“At the time, it was for vacation purposes, but we knew it would eventually be full-time,” he said.

They purchased their home from Erin French of The Lost Kitchen fame, and her ex-husband.

“People who have read Erin’s memoir [Finding Freedom: A Cook’s Story; Remaking a Life from Scratch] have told me that a number of scenes took place in my house, apparently at a time in her life when things were unhappy,” Spencer said. “Fortunately for Erin, she seems to have rebounded beautifully and to be having a lot of fun, which I’m happy to see.”

The couple moved to Belfast full-time in 2020. They have two grown daughters, living in New York City and Maryland, as well as one grandson and another grandbaby on the way.

“I’m not truly retired,” said Spencer. “I just changed professions. I ended my law practice in 2020 and devoted myself full-time to writing at that point.”

Spencer’s first book, Church of Golf: A Novel About Second Chances, was published in 2014.

“It’s all about a washed-up, self-absorbed sports hero who has reached middle age. He’s lumpy, broke, drunk, out of friends and out of options. For him, a religious devotion to golf is the way back,” Spencer explained.

The idea grew out of conversations with fellow golfers when he was spending a lot of time on the links.

“I had conversations with several friends about how golf was basically a model for enlightened living,” Spencer said. “We were all remarking about how much we learned about ourselves through golf. If you have any bad habits, they will show up on the golf course, and if you want to get better at golf, you have to master those shortcomings and those weaknesses.”

“It was about five years from the date that I consciously thought, ‘I have an idea for a book’ until the date it actually got into print,” he said. “It’s about a Saudi woman, a member of the royal family, raised under bizarre circumstances where her life is dictated and controlled by her authoritarian father. He raises his daughter to become a terrorist, but she doesn’t know that until it’s too late. He coerces her into coming to America as a trainer of terrorists. She wants nothing more than to get out, to become her own master, and because she has friends who have moved out of D.C. and gone to Maine, she dreams of Maine, of someplace she can be free and peaceful.”

Spencer is busy writing for about 50 hours a week, plus doing his radio show. Catherine runs a small Internet-based business.

“We love Belfast,” he enthused. “We love the downtown. We love taking long walks on the Passy Trail [Belfast Rail Trail], and taking our dog down to the water and letting her go jumping and swimming and having fun. We enjoy getting to know our neighbors and making new friends. Belfast is one of the loveliest downtowns I have ever seen and I feel more at home here than I think I have anywhere.”