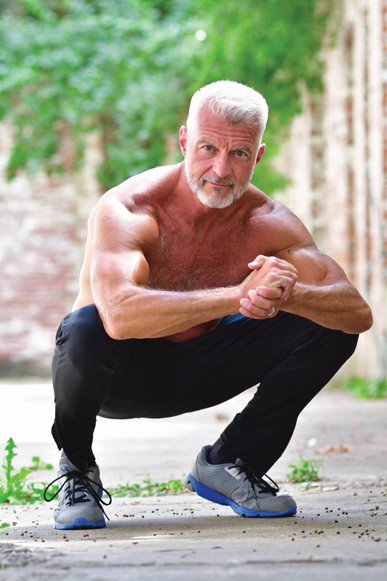 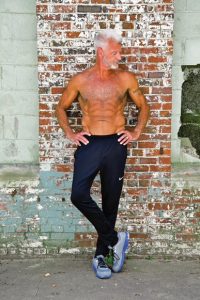 Almost a year after retiring from the News Center Maine anchor desk to be a personal trainer, Lee Nelson, 59, is hitting his stride as a . . . model! Maine Seniors writer Amy Paradysz caught up with him via Zoom about his two career transitions in one year.

Amy: My mom and her best friend are a little jealous that I get to interview you this morning. The photos of you that were on social media last summer were definitely . . . compelling. I don’t think any of us watching the news had any idea how buff you were!

Lee: Because I was wearing a coat and tie all the time!

Amy: Did you expect all the attention?

Lee: No. I figured a few people would give me a hard time. But I didn’t expect the attention. I have a couple of agents now. But last year my Maine-based agent had me get some photos done in anticipation of leaving television and starting in the fitness world. I sent her the photos and said that she could put them on the website. I wasn’t as clear as I should have been, and she posted them out on social media. And, yeah, the reaction was pretty big and fast and overwhelming. My employer asked me to take them down until I left, and I fully understood that.

Amy: Why would the station want them down?

Lee: Anchorpeople are in this box. We wear a shirt and tie. We behave ourselves. Not that I wasn’t—

Amy: You can have a sense of humor, but you’re always very put together?

Amy: How long had you been in television news? 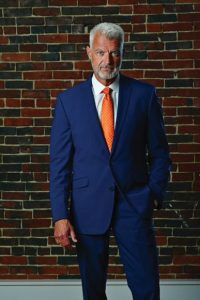 Lee: Since 1986. Pretty much my entire adult life. My first television job out of college was as a page with NBC in Manhattan. But I wanted to be on the air. My father had been an anchorman.

So, I would make a tape and send it out to various stations. And Hattiesburg, Mississippi said, yes, come on down, and I went down there, sight unseen. Cindy and I met at a little NBC station there. She had gone to school in that area and had gone right to work. I met her, and the rest is history. We’ve been married 32 years, and we have two sons. Xander is 27 and Noah is 24.

Lee: Yes, we sold our house in Falmouth, and we’re in an apartment at the [Pepperell] Mill in Biddeford. It’s a little weird being in an apartment after being in a house for so long. But it’s a style we’ve always admired: exposed brick and high ceilings.

Amy: Has fitness always been part of your life?

Lee: Always. I played sports when I was a kid, and I’ve worked out consistently for 45 years. I was a martial arts instructor for a few years. I played basketball for years. I ski, and I run. And I’ve been lifting a long time. I was a real skinny kid, so lifting was a way to escape that.

Amy: When did you start personal training?

Lee: I got my first personal training certification in 2000. I had a couple of clients on the side back then, but my schedule didn’t allow for more than a little sidekick.

Amy: How intense is the schedule being an anchorman? 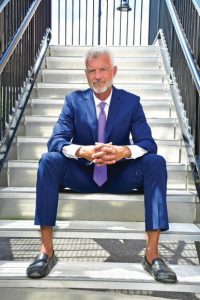 Lee: I did the morning show for 30 out of the 31 years. So, I was waking up at 3 a.m. The schedule was both hard and easy—hard because it’s hard to wake up at that hour, but easy because my wife and I could share taking care of the kids and things at home. And I got to coach teams after school, which was really nice. But waking up at 3 a.m. never got easy.

Amy: Was it difficult to do anything in the evening?

Lee: We’d try to go out on a Friday night or Saturday night, and it would get to be 9:30, and I’d be yawning in the corner. But I’m a normal human now.

Amy: How long had you considered making the career change to personal training?

Lee: Longer than people know. I loved my job. But I did the same job for 30 years. And I think I’m not the only person who, during COVID, said, “You know what? Life is short, and I’m going to do what I really want to do.”

Amy: Was it difficult, one day you’re an anchorman, the next you’re a personal trainer?

Lee: I started working at Foley’s Fitness in Scarborough while I was still working in TV news. It was after I switched after the early morning shift, and I was taking clients before and after work. My planned retirement was Halloween. So, once I hit retirement from TV, I took on a lot more clients. About 25. 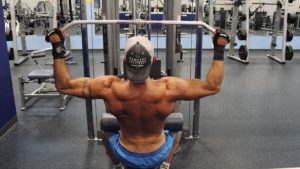 But now, a year later, things are changing. I’m phasing out of training because this other thing has come about because of the training. It’s funny. It sounds weird coming out of my mouth, but I’ve been doing modeling. And it’s picking up, like quite a lot.

Amy: When was your first modeling shoot? 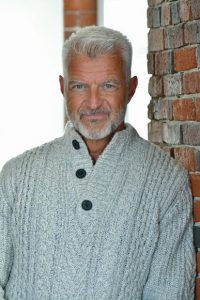 Lee: January 2021. The first job I had was in the L.L. Bean catalog. It kind of came my way, and it has led to some other things that I’ve done. And it has progressed to the point that I’m shifting toward that a bit more and downsizing my personal training.

Amy: What does Cindy think of now being married to a model?

Lee: She thinks it’s wonderful. When you get an opportunity in the modeling world, you have to shoot a video, read a certain script, or something like that. And she’s usually the one behind the phone camera doing that for me. And the feedback from agents is that companies want people of all ages.

Amy: And you’re definitely comfortable in front of a camera.

Lee: Comfortable in front of a camera, and I’m in pretty good shape.

Lee: So, I fill a need. I have no illusions that I’m going to be the next big star. This is just a fun thing to do in retirement, really. It’s very fun. And that’s kind of why I’m transitioning more into modeling. Not that training isn’t fun. But this is very fun.

Amy: Is it more fun doing the modeling the day of the shoot or seeing the finished work?

Lee: It’s more fun doing the shoot. The production crew and photographers want you to be in a great mood because they want to get good shots. So, there’s fun music playing, and most of these studios you shoot in are funky, cool places, and the people are creative and interesting to talk with.

Amy: Who else have you modeled for, since L.L. Bean?

Lee: Nikon Cameras. And—I can’t say who it is because it’s not out yet, but a tech company. I do these shoots, and they don’t come out for months and months while they’re being processed into ads. A nutritional supplement company. And a university. And I’ve got some jobs set up with a photographer from New York coming up to shoot some outdoors stuff.

Lee: Yes. I did two full shoots with L.L. Bean, one for the catalog and one for online. The catalog shoots usually show the full face, and they’re much more intricate in the way that they set everything up. The online ones, for their online store, oftentimes it’s just a shot of your pants or a shot of your feet. That day was fun, too, though because I tried on so many clothes. I’d try on this pair of pants and these shoes, and they’d take, like, 25 shots. I’d change and come back, and they’d do it again. Change and come back, and they’d do it again. It was like that for eight or ten hours. But the atmosphere is so fun that it wasn’t even close to being work.

Lee: Yes, absolutely. But, before this, we had three kids at home. . . Financially, it didn’t make a lot of sense. Sometimes I regret not taking the leap earlier. But, mostly, I don’t. Because it has all worked out really well.

Amy: Do you get any of the clothes?

Lee: No, I haven’t. And the Bean’s clothes were super nice, as you can imagine.

Amy: At least you know what fit you well. Can you tell me more about the personal training? What ages are your clients?

Lee: All ages, although most of my clients are 40 and older. I think that’s because older clients feel comfortable with an older trainer.

Amy: Maybe for safety? Maybe they think you won’t push them too far? 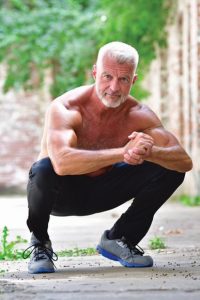 Lee: No, I push them. It’s not that so much as that I understand the aches, pains, and injuries that older people have. I’ve had four elbow surgeries, so I know what it’s like to work around an injury. I have people with rotator cuff issues, people with fully replaced knees, someone with a brand-new hip. But I also have athletes, younger athletes as well. I’m comfortable with any age, but I do think that many older people are more comfortable with an older trainer.

Amy: What sort of goals do your clients have?

Lee: It’s often to lose weight and get more toned. I provide some nutritional advice as well. I have an accreditation with NASM, the National Academy of Sports Medicine. I have a client who is going to have knee replacement surgery and wants to be a little stronger for that. I’ve had eight clients with shoulder problems, and maybe they want to strengthen the area around an injury and get it back closer to what it was before. All kinds of things. Everybody has fitness hopes.

Amy: What about you? Have you been involved with fitness competitions?

Lee: I’ve done some Spartan events. It’s one of those competitions where you crawl through the mud, climb mountains, and do obstacles. I’ve done a couple of those in Massachusetts, and I actually did one in Italy a few years ago. They’re really fun, but not televised or anything like that. 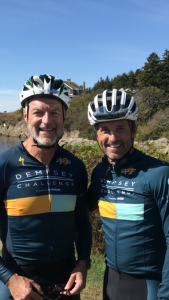 Lee: Yes, I’ve been emceeing the Dempsey Challenge for years. Patrick Dempsey founded this holistic cancer center about 12 years ago, and it’s really important to me. I lost my mom to cancer in 2017. She lived with us for the last six months, and it was a tough go. So, I knew the organization, and when Patrick asked me to join the board, I didn’t have to think about it. I said yes and got to work.

Another element in my story is that I lost my father when he was 52, and I was 18. That has been a major factor in a lot of the choices I’ve made and health being so central. My dad wasn’t the healthiest guy. He smoked three packs a day. A big reason that I’ve been in the health world as long as I have is because of that. Seeing him die at 52 tells me—I’m 59. I’ve already outlived him, and I want to enjoy my life as much as I can.