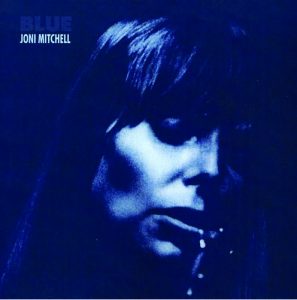 I’m 62, but my 14-year-old self is feeling pretty darn proud these days. That’s when, in the early 1970s, my closest friends and I couldn’t get enough of Joni Mitchell.

It’s odd to recall, but in those days we Joni devotees were often slipped into a stereotype. Like our muse, we were viewed as too romantic, introspective, and sensitive. Too moody, blue, and self-absorbed. Couldn’t we be more upbeat, a little more Olivia Newton-John?

Joni’s star has risen. The label pinned to her now: genius. If she ever wondered about her own “dent in the universe”— Steve Jobs’ phrase for leaving a mark on the world—she needn’t any longer.

In December, she will be honored for lifetime achievement at the John F. Kennedy Center for the Performing Arts. In January, she will receive the Grammy MusiCares Award. The Grammy Lifetime Achievement Award was bestowed on her in 2002.

At the same time, Joni’s Blue, whose 50th anniversary was celebrated in June by NPR, Spotify, and the national press, has found a second life. Two years ago, folk-rock musician Brandi Carlile performed all ten of Blue’s songs in LA. This month she reprises the concert at Carnegie Hall, singing the record that one NPR poll named “the best album ever made by a woman.”

We were mesmerized by story-songs with characters we’d never met—Trina in wampum beads, Marcie in a coat of flowers. Songs that fused poetry and prayer, as everyone knows who has ever sung along to “Woodstock.“ Songs that mapped a woman’s heart. Songs more like a flower’s essential oil than the flower itself.

I think back to 1973 and remember the day Blue joined my record collection. I was in eighth grade, home with a cold and fever, and preyed on my mother’s sympathies.

“Please,” I said from under my pink bedspread. “Will you go to Corvettes after your errands? There’s this album Blue by Joni Mitchell, and I want to learn the songs by heart.”

To my great surprise, my mother came into my room that afternoon record in hand. Sealed in the cellophane wrapper, I studied the haunting cover—a female face, serious and sad, dissolved in a blurry palette of blue.

Little did my mother know that in handing me Blue, she was opening the door to precisely what she wanted to keep out—womanhood. That same year, my mother refused to let me see the movie Summer of 42, because of the sex scene between a teenage boy and war widow. That same year, my mother prohibited me from attending coed parties without chaperones for fear those games of spin-the-bottle would spin out of control.

Eventually I’d understand those “noes” had roots in forces far beyond her temperament. I came of age in a chasm called a generation gap. Mothers shaped by World War II, the baby boom, and the retreat into family. Daughters shaped by the Vietnam War, the women’s movement, and birth control pills that made it possible.

Into the maternal silence on love and sexuality stepped Joni. In melody and poetry, she supplied the one kind of knowledge we teen girls really cared about—lessons in the School of Life.

Along we went with her on Blue, travelling on love’s byways, riding her metaphors:

“You’re in my blood like holy wine/You taste so bitter and so sweet/ I could drink a case of you, darling/ And I would still be on my feet.”

“Star bright, star bright/ You’ve got the lovin’ that I like, all right/ Turn this crazy bird around// I shouldn’t have got on this flight tonight.“

“Blue/ Songs are like tattoos/ You know I’ve been to sea/ Crown and anchor me/ Or let me sail away.”

She was our guide through Europe, footloose and free, looking “for something, what can it be?” In Greece, we met Carey, delightful rogue. In Paris, we sat in a park, dismayed by news of war, yearning for home in California. In Spain, we ambled down a dirt road to a party, its fashionistas reading Vogue and Rolling Stone.

“Welcome to the holiest day of the year,” says Ann Powers, National Public Radio’s music critic on the afternoon of Blue’s 50th anniversary this past June.

It’s 2 p.m. and I’ve tuned into a celebratory “Listening Party.” Festivities begin with Powers and special guest Brandi Carlile speaking about Joni’s legacy. The word tumbles around in my brain and links to another kind of legacy: the personal kind carried forth in families.

From MidCoast Maine, I text my 27-year-old daughter Emily, a wellness coach and yoga teacher in Tel Aviv. “Blue’s being celebrated on NPR. They’re playing the album. Listen if you’re free.”

Fifteen minutes later, a second bing. “’A Case of You’ is the most beautiful song everrrrr! How did I only just get that?”

It’s a conversation with my daughter with long roots, stretching back to her days in elementary school. I was determined to make Joni a musical muse for her, as she had been for me.

Emily and I still laugh about the afternoon in fifth grade when her school librarian spoke the words: “Don’t it always seem to go, you don’t know what you’ve got till it’s gone.” Emily’s hand shot up among fifteen quiet listeners.

“That line was written by Joni Mitchell.”

Her ten-year-old classmates marveled at her newly demonstrated encyclopedic knowledge.

Another text from Tel Aviv: “Thank you for the best education and spiritual connection, ever.”

I started Emily early, with songs a child would like: “Circle Game,” Clouds,” “Chelsea Morning,” “Big Yellow Taxi.” When she became a teenager, I added “Help Me” and “Free Man in Paris.” When her relationships got complicated during her twenties, I texted her links to “Woman of Heart and Mind” and “Cactus Tree.” After the NPR Listening Party, “A Case of You” skyrocketed to the top of her list of personal favorites. A choice I approved wholeheartedly.

From Joni to Brandi on the performer’s stage. From mother to daughter on life’s stage. On the 50th anniversary of Blue, my daughter, far away in Tel Aviv, was as close to me as she could possibly be, dancing to “California” in the June moonlight.