At first glance they grab at you, pull you in with their size, their shape, their weightless appearance, and their absolute incongruity and magnetism. Jay Sawyer’s (aka Studio JBONE) metal sculptures are unlike anything you’ve ever seen. Some of them look all the world like light-as-air dandelion puffs, perfect spheres that appear to have lighted on their own, as if they had drifted into place in landscapes and gardens. Some glitter and catch the shifting sunlight to reveal shadows or others exhibit colors that belie their medium. Some carry the weight of that world within their abstract frames that have been hammered and fused into burly conglomerations that hint at their identities.

In truth, all these metal structures carry within them the substance of the past, the history of industry, the trappings of modern civilization, the hopes and dreams of past lives, even the sweat and blood of good intentions. And a word of caution here, to see them is to want one.

Talk with their creator and you’ll soon realize that every one of his metal constructions has a story to tell, a history, a biography even — a heart.

“This stuff,” Sawyer respectfully says of the medium in which he works — twisted hunks of metal, bolts, spikes, rusted rebar and chain, gears, bars, wheels, and whatnot, “This stuff deserves a better home than a junkyard. Even if it is a bucket of old rusted horseshoes, I give it another purpose.”

And that purpose has produced an amazing body of work.

Sawyer was not always an artist. In fact, he started his professional career as an engineer in the merchant marines, after graduating from Maine Maritime Academy. It was a hard life, time away from home and family. So, after stashing away a nest egg, he came ashore and started his own welding business and set to raising his family. As he gained experience and expertise, it eventually became evident to him that doing a good job, being successful at that work was not enough for him. The path to that realization took him nearly 20 years, and a generous heap of help from some mentors who saw something in him, in his work that he was not quite aware of himself, not yet.

“I’ve had no formal art education,” he adds. “I’d had these sculptors calling me to help them finish their works, or to do repairs,” Sawyer recalls.

“I already had those skills and I took them for granted. I had thought that anyone could do this, what I was doing, if they just put their mind to it,” he says. “Then I realized I had a gift.”

Sawyer credits three artists, mentors who helped to not only promote his works, but to guide him in his creative journey. One in particular, David McLaughlin, helped him develop his signature airy steel spheres. McLaughlin’s role was as mentor, and then in 2010 he bequeathed his most cherished possession of raw materials to Sawyer, thousands of shear rings that were salvaged during the demolition of Hangar #2 at the Brunswick Naval Air Station, to “carry on the subject of spheres in his absence.” These rings are what comprise “A Spirit of Its Own,” Sawyer’s monumental public statuary at the Portland International Jetport. Art dealer John Ames was also among the first to promote Sawyer’s art. Sawyer credits Marylin Quint-Rose, an accomplished paper sculptor, for drilling the importance of the work itself into the artist. 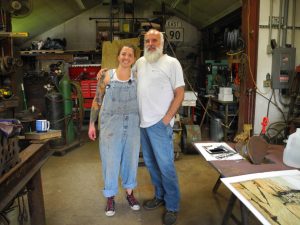 Sawyer’s first art exhibit in Cushing in 2007 was instrumental in giving him the courage to pursue his art full-time. “I took nearly six tons of sculpture, 34 pieces, to that show,” Sawyer recalls. “I had 16 sales from that one show. That gave me the confidence I was looking for.”

And looking at the massive body of work he has since accomplished, it is clear that his talent has come full circle. (Yeah, that’s a pun.) With no shortage of inspiration, Sawyer has accumulated, purchased, received donated materials, and salvaged a massive amount of the “medium” he uses to construct his sculptures. He conservatively estimates he now has some 75 tons of scrap metal material, enough to last him for a very long time. He says he expects to turn it all into sculptures and “not leave a mess for my family to clean up, after I’m gone.”

Sawyer’s studio in Warren is located near his home on seven and a half rolling acres that is also the site of a rambling sculpture garden dotted with dozens of his works. Some are massive, others not so big. But every one of them tells a story, and in so doing they speak to people.

“Many of them are biographical,” Sawyer says. There is a monumental piece constructed solely of heavy chain, a huge copy of those chains that surround the tires of logging vehicles — an homage to his father-in-law who worked in that industry in the Maine woods. Others honor lost friends or family members, many with wry winks at personal foibles or endearing characteristics. Cold steel fused, worked, combined, and forged into personal histories. 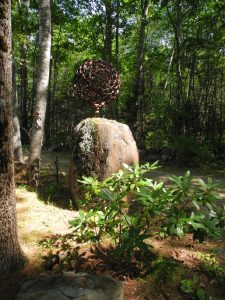 Until 2018, the garden was open for scheduled tours, and certain days of the week, but an increasing workload as the demand for his art has grown put at least a temporary end to visitors.

“At one point, we had a thousand people a year coming here,” he says. “The main goal of that was to expose my work, but in the end, it started to feel out of balance and I was spending too much time with that and not enough on working. I don’t know if it will open to the public in the future.”

In the years since he established the sculpture garden, Sawyer has completed a number of commission pieces. He estimates he has works in every state up and down the Eastern Seaboard, some in the Midwest, another in Texas, as well as in California, Washington, Oregon. A small list is developing of works that have gone to international destinations. He has large public works in Portland at the Jetport, Ridin’ the Rails to Rockland is installed at Sandy Beach along the Rockland Harbor Trail, Endless Trot is a part of the permanent collection at the Owls Head Transportation Museum, and another is at a commercial site in South Carolina.

“My work seems to resonate with a lot of people,” he says. “And in time, I have learned to take it seriously. I have come to think that maybe my art is bigger than me.”

These days, his daughter, Sarah, joins Sawyer to help with tasks, such as prepping components for her father to use in his creations. In addition to several commissions, Sawyer’s busy schedule includes an especially personal project he started more than five years ago, titled El Faro Salute! a memorial to the crew of the merchant marine ship El Faro which was lost with all hands in a 2015 storm. Five of the victims of that tragedy were fellow graduates of Maine Maritime Academy. Three of them have families in the MidCoast area, two lived in Rockland, one in Wilton, and one in Windham. It was a loss that hit Sawyer especially hard and close to home. 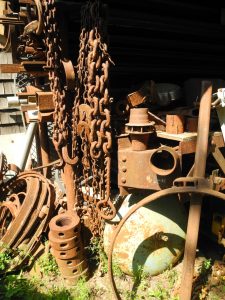 The artist is currently fundraising to help finance his project, which already has been offered a permanent home on the waterfront by the Dragon Cement Company in Rockland.

“By creating this, I felt it has healed me,” he says of the piece, which will reflect the region’s strong maritime history. It has shown me the therapeutic benefits of art.”

Sawyer tried to include the families of those lost in the El Faro tragedy, and Maine Maritime alumni, during the project. The parents of the late El Faro Chief Engineer, Richard Pusatere, have provided a welding machine that had belonged to their son. The gesture, which helped the family feel like part of the project, is another example of the therapeutic benefits to come from the artwork. “The symbolic nature of this gesture is another example of potential ways for therapeutic benefits to come from the effort,” the artist says. Sawyer’s most optimistic forecast, with continued success at fundraising, would be to unveil the memorial in a ceremony on June 25, 2022, International Day of the Seafarer.

Sawyer’s own voyage as an artist gains headway as his works capture more attention, yet throughout it all his art keeps him grounded in a heritage that has inspired him and yet enabled him to soar. His delightful creations may be heavy as lead, but they always ascend their medium, taking flights of fancy and wonder.