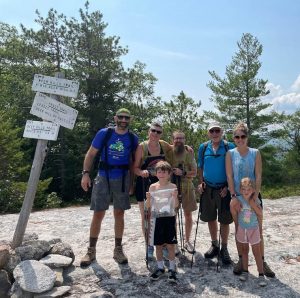 Thirty years ago, I took my two youngest children, Galen and Ariel, hiking in the Maine mountains every weekend I was not working. My oldest was already a teenager and interested in other things. Before we set out, we studied 50 Hikes in Maine and 50 More Hikes in Maine, looking for the less challenging hikes at first, then later the most challenging. We hiked them all: the 4,000 footers, the Mahoosuc Range, Evans Notch, the Camden Hills, Acadia, and finally, the great Katahdin massif. Most summers, we backpacked somewhere in Baxter Park.

The mountains of Maine are not easy or forgiving, containing the most challenging 282 miles of the Appalachian Trail and the most demanding one mile in the Mahoosuc Notch. My kids sometimes labeled our hikes “death marches.” To keep their spirits up when they tired, I told them stories about civil war battles and classic mountaineering adventures. Gettysburg and Antietam would alternate with the first ascent of Annapurna and heroic tragedies on the North Face of the Eiger. They seemed to enjoy the stories. Mostly, they enjoyed the hiking, although my son often complained of every ailment known to man. Who knew he would go on to hike the Appalachian Trail?

When Ariel moved back to Maine after fifteen years living in London and Galen had settled down with two children of his own, we again took up family hiking. But by now, roles had reversed. Ariel tells me stories to keep up my flagging spirits on our “death marches.” Her stories, though, are not about battles or mountaineering adventures. They center around more contemporary events, such as how Ronan Farrow helped to bring down Harvey Weinstein. 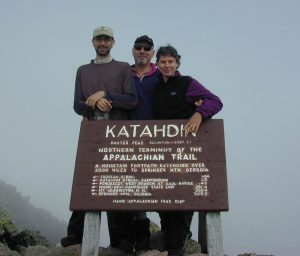 We also hike with Lorenzo and Philly, Galen’s preschool-age children. When their spirits inevitably sag or the complaints begin, I tell them mountaineering and civil war stories. In the mountaineering stories, there are no heroic tragedies. No one dies. There is usually a miraculous rescue by mountaineering paramedics Lorenzo and Philly, accompanied by our 6 lb. Shih Tzu mountain rescue dog Roxi. Helicopters are often involved, flying improbably at 20,000 feet.

Other times, I tell them civil war stories, but these stories, at the kids’ request, now include gods, wizards, dragons, and all sorts of fantastical beasts. One recent tale was about the battle of Gettysburg, not very appealing to a 6-year-old and 4-year-old. But the gods, wizards, and dragons kept them interested, and there was Cemetery Hill from where the undead joined the battle and Devil’s Den, which speaks for itself.

Galen and I sent Lorenzo ahead to scout the next blaze. If he fell, he would bounce right back up and declare he was fine. Not me so much. I took an awkward fall, causing an elbow laceration and an ankle sprain. 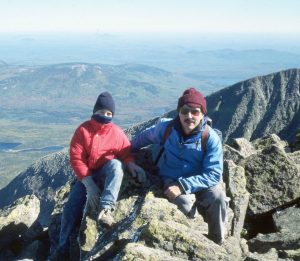 When did our children become our parents? After the fall, Ariel told me I needed balance training which is probably true. Galen told me I wasn’t using my trekking poles correctly, which I had been using before he was born. Yet this is also probably true.

Still needing to hike out a mile or so plus another mile to Emerald Pool for the family to swim, I took off with Lorenzo ahead of the rest of the group. We chatted about Harry Potter. Talking to him kept my mind off my now throbbing ankle. He had seen the first three movies and listened to the first three audiobooks. I had just finished watching all eight films, mostly so I could talk to him about them. Unfortunately, the books have way more information than the movies, so I was at a significant disadvantage in the mostly one-way conversation. Still, I loved talking to him.

While behind me, he saw blood streaming down my arm (as happens to a 74-year-old even with a minor laceration). He asked to see the cut. Squinting his nose up close, he proclaimed, “Well, you are not going to die.” Ah, I used to say that to my son, who I suspect had said that to him.

Appropriately reassured, I kept on hiking. Lorenzo then added, “You know what is worse than dying, Papa?” I shook my head. “Dying a very painful death,” he announced with the assurance of a 6-year-old. I tried to ask him where he learned that, but he had sprinted ahead out of earshot by then. 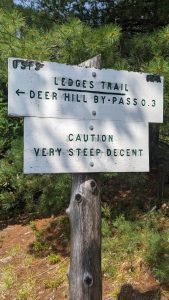 Later, I thought about that brief exchange. I realized how profound, almost existential, my grandson’s words had been. At 74, death is often on my mind. Indeed, a very painful death is worse than death.

But enough of that. Time to read Harry Potter, perhaps take notes. Also, time to work on my balance and trekking pole skills for our first three-generation family backpacking trip into Chimney Pond next year.