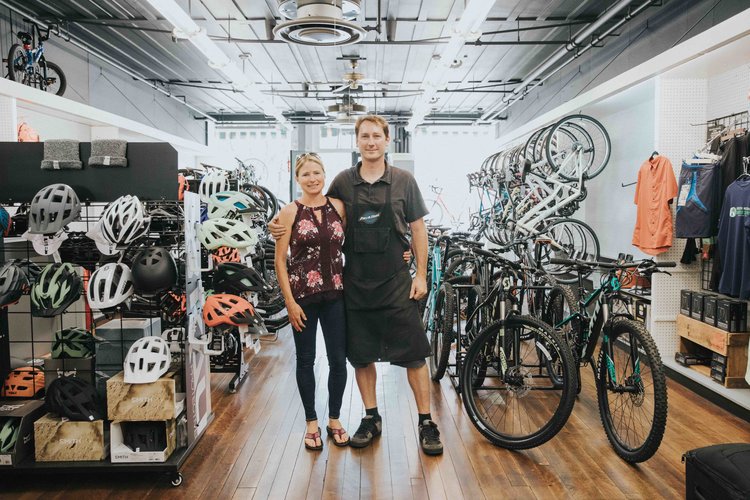 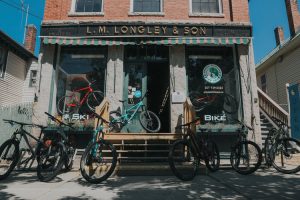 A decade ago, Norway, Maine was all but a ghost town. It had almost become a thing of the past, a historic relic. Most of the village, rebuilt after the Great Fire of 1894, is listed as a National Historic District. Norway’s buildings consist of some of the best examples of period architecture in Maine, including the often-photographed iconic Norway Maine Opera House. Today, thanks to several entrepreneurial women and despite the trials of COVID-19, Norway’s streets are more than just a photo stop.

Angela and John Harvey, owners of Green Machine Bike Shop, have witnessed a revival over the past decade. “We will be in business 10 years this April [2022] and rolling into our 11th summer. In this time, we have seen Main Street grow and become more alive and vibrant, and most of the storefronts are occupied.”

People are gravitating to Norway for several reasons. “We chose to open the Green Machine Bike Shop in Norway because of one fine cold, windy, winter’s day in January of 2012,” recalled Angela. “John and I were parked on Main Street checking out the scene, maybe even hoping for a sign that this could be a good home for the bike shop, and sure enough, a bike rider dressed in full winter gear comes pedaling right by us not skipping a beat. We took that as a good sign and searched for available rental space on Norway’s Main Street.” Green Machine Bike Shop now has a home at 419 Main Street in the well-known Longley Building.

The couple does not regret choosing Norway. “We enjoy being on Norway’s Main Street! It has a great vibe, a nice variety of shopping, and seems to only be getting busier,” said Angela. A sentiment shared by another long-time business owner of Norway, Barbara Daigle. Barbara opened Sew Orchid Design seven years ago, which gave her a front-row seat to Norway’s downtown evolution. “When I looked for a place to open a shop, I really wanted to look, number one, at community. The town of Norway does a lot in the community and is always trying to build it up. Since I’ve been here, [Downtown Norway] has done a lot of different activities to pull in the people from other areas, and in the past two or three years, we have seen growth in the number of customers coming in for the day.” 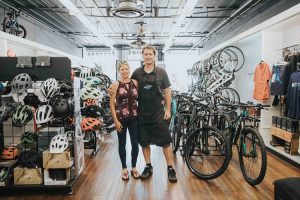 One building in particular, the infamous Opera House, is now the location of several woman owned and run businesses including The Raven Collections [crystals, minerals, fossils jewelry], Fiber & Vine [arts and wine], and Brick & Mortar [home, kitchen and garden]. In September of 2017, Gina Harlow, owner of Handmade Maine, moved her business to the Norway Opera House. There she sells herbal skincare products, upcycled wool sweater mittens, wind chimes, kitchen linens, pottery, pebble art, specialty foods, and more. She makes a point not to carry items offered by other downtown Norway businesses. “Most of the businesses [in Norway] are owned by women, which is kind of neat. It’s just a great little hidden-gem community!” she said.

Gina has a passion for encouraging women in business. “Most of the artisans that I source my products from are women. I don’t specifically go out and seek women. It just happens that most of them are, so I’m contributing a lot to their income so they can stay home with their kids or keep growing their business and their dream,” said Gina.

“The number of women entrepreneurs on Main Street has just exploded,” Barbara said. “When I first opened, there was a jewelry store owned by a woman, Fiber & Vines owned by a woman, and The Raven owned by a woman,” she said. Since then, several more women run businesses have opened. Two women who know that well are Lourdes Rubio and Liz Cook. “Both of us have loved Norway for a very long time. Liz has been here since the 1980s and I have been here since 1997.” However, it wasn’t until 2020 that they decided to open their own business, even though they had no previous experience.

“Liz works as a guidance counselor,” Lourdes said. “When we first started, I was also working, for the federal government in the Social Security Administration. I retired from that job at the end of last year so I could just do this full time.” Opening a business during COVID was challenging, and the duo faced several setbacks before their grand opening. Today, Dolce Amici, a gelato shop and cocktail bar, is thriving. Maine law dictates that if alcohol is served, food must also be served, “so little by little, we became a full-service restaurant,” said Lourdes. To entice patrons, Lourdes and Liz offer special dinners like their Cena di Sabato [Saturday Dinner] four-course pre fixe meals, guest mixologist events, and their Festival of the Seven Fishes on Christmas Eve.

Despite the shutdowns, business in Norway continues to flourish. With fabric and elastic on hand, Barbara set to making masks. She aligned herself with the Masks for Maine organization, which connected sewing enthusiasts statewide with healthcare organizations and others who needed masks. By serving as a drop-off/pick-up site for masks, Barbara was given the opportunity to meet additional quilters and sewers that didn’t know about her shop.

The Green Machine Bike Shop was in a similar boat. “We are blessed with so many loyal customers, and we are making new customers every day,” Angela said. “There have been many challenges running and navigating a retail business through the pandemic. Supplies are short and shipping time on product is experiencing huge delays. We overcome our struggles by trying to stay positive, showing up to work every day, and doing what we do best, greeting our customers, making them feel welcome, and providing the best experience we are able.”

To comply with restrictions, Lourdes and Liz began offering takeout and bubble dinners, which allowed a small group of people to have the restaurant to themselves for an hour and a half. They also reconfigured indoor seating for more social distance and added an outdoor patio much sooner than planned.

All in all, the business owners are content in their little village and are excited to share their hidden treasure with those around them. “It’s just a quaint, historical Main Street that really kind of takes you back in time,” said Barbara. “There is a huge variety downtown, and people should look at the entire street because more businesses have grown beyond what used to be considered the Main Street area.”