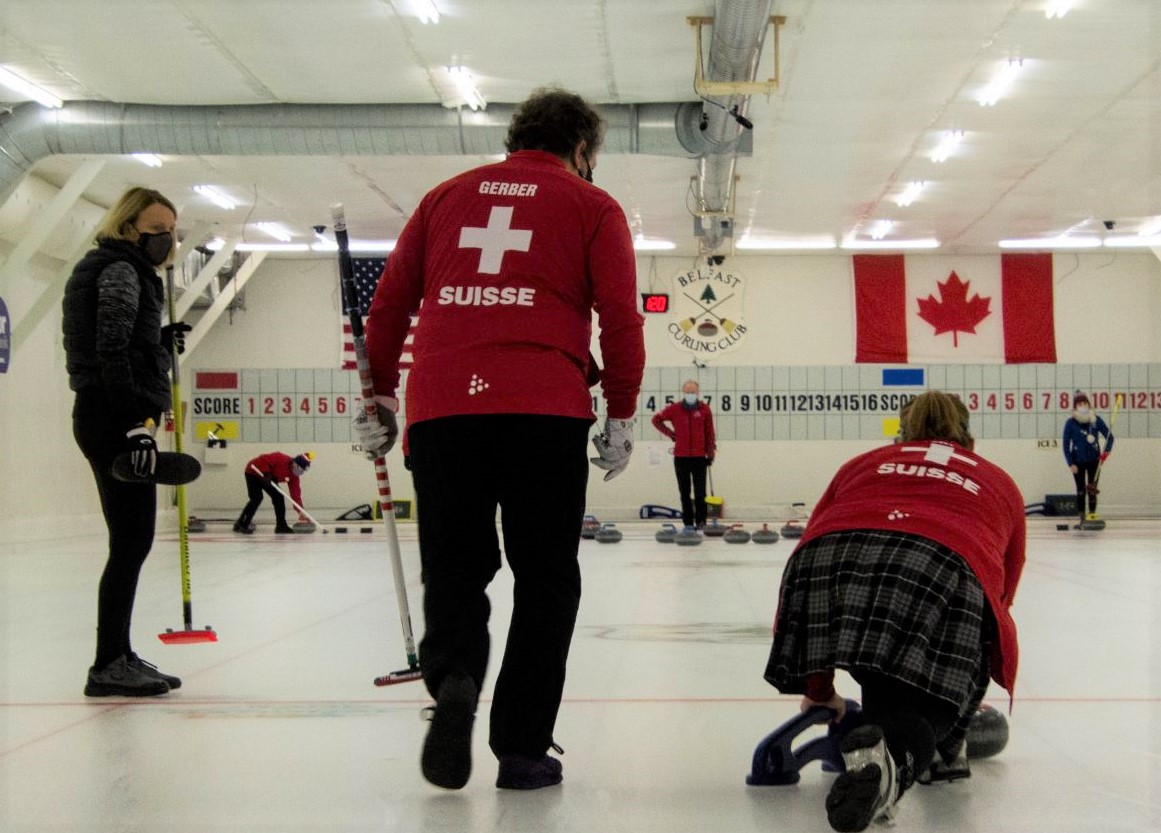 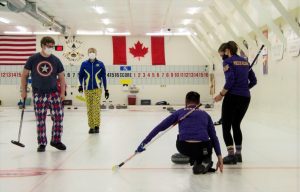 To the uninitiated, curling can look like a lot of people standing around on the ice with what appear to be squeegee mops. In fact, a game of strategy and finesse with an ancient history is in progress. According to the World Curling Federation website, the game dates to at least the 16th century in Scotland and the Netherlands. Scotland is usually given credit for inventing the game, and the Scottish Curling website goes so far as to point out that the Netherlands “is spectacularly deficient in that necessary raw material, hard igneous rock, from which alone the peculiar implement of the game, the curling stone, is made.”

From Scotland came immigrants who settled in Canada, where the sport continues to be popular, second only to ice hockey. From Canada, curling made its way to Maine. Steve West, president of Belfast Curling Club, said the game has long been popular throughout New England and in the upper Midwest, near the Canadian border. But in the last decade, it has spread throughout the U.S., and now there are clubs in California, Florida and everywhere in between.

Belfast Curling Club opened officially in February 1959, according to the club’s website. Its founder and first president, Dr. Norman Cobb, was a family physician from Calais who had learned the game in St. Stephen, New Brunswick. The clubhouse on Route 3 was constructed entirely with volunteer labor on donated land, and BCC still occupies that original building.

Last year, the pandemic forced the club to close for the winter, normally its busy time, Steve said. As a result, a pipe froze in the bar and burst, dumping about 10 inches of water into the basement. The whole lower level had to be gutted, and is in the process of being remodeled. Eventually, it will have a new women’s locker, storage area, pro shop, handicapped bathroom and entrance. 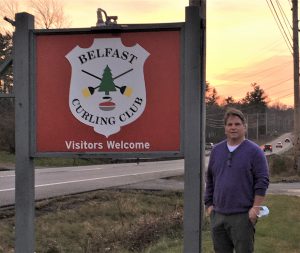 The construction will cost around $300,000, of which the club expects to be able to cover about half, between funds it has on hand, fundraising and an insurance settlement, Steve said, and will seek a loan for the balance. The permitting process was “eye-opening,” he said, because of the building code changes that had occurred during the sixty-plus years since the facility was built.

In addition, the state fire marshal will require the club to install a sprinkler system throughout the building within two years, another $200,000-plus cost.

The Belfast club has “the only dedicated curling ice in Maine,” Steve said. Clubs in Portland and Dover-Foxcroft play in hockey arenas, where “the ice conditions are a bit different,” he added.

About that ice: it’s not the glass-smooth surface a skater or hockey player would demand. Before a curling match, someone dons a portable tank worn like a backpack that is filled with hot water. A hose with a special nozzle attached to the tank sprays water droplets over the surface of the ice, creating many small bumps, or pebbles. This process is called “pebbling,” and is what enables the stone to glide along over the ice. The friction of the forty-to-forty-pound stone moving over the ice melts the pebbles, providing a thin layer of water for it to travel on.

That is also the reason the sweepers, team members armed with what look a bit like squeegee mops, but are called “brooms,” walk or run along a little ahead of the stone as it slides and scrub the ice in front of it to wear down the pebbles to allow it to keep going. 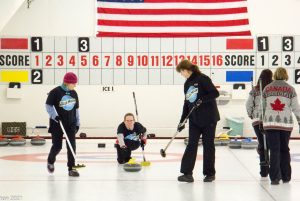 The game is played with two, four-person teams, each of which tries to get its stones closest to the center, or “button” of the target, known as the “house,” which is composed of four concentric circles. All stones touching anywhere on the target have the potential to score, depending on where the other stones land.

Each member of a team throws two stones in succession, with the two teams alternating until each team has thrown eight stones. After everyone on both teams has thrown, one “end” has been completed. At BCC, most games consist of eight ends, and tend to last around two hours. Championship matches, for example in the Olympics, have ten ends. The score is kept for each end and totaled at the conclusion of the game.

Of the four members of a team, the skip calls each shot, standing at the far end of the ice and directing the thrower where to send the stone and which way it should rotate. The skip is also usually the best shot-maker, and so throws last. The lead throws the first two stones, setting the team up to score later in the end. The second throws after the lead. These two players become the sweepers for the last two. The third, or vice skip, throws next, and, according to curlingbasics.com, is usually “the most well-rounded member on the team,” able to make every type of shot and a master of strategy. Finally, as mentioned above, the skip throws last.

In part because it is not widely played or followed, curling is not just a sport, but a culture. Competitions between clubs are called “bonspiels.” There are rules to learn, plenty of unique terminology and, of course, equipment, to give players a sense of group identity. 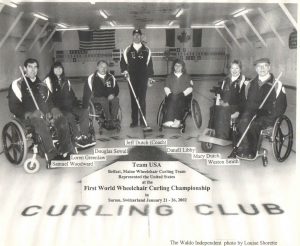 In order to help new players find their way, BCC offers draft leagues, with teams made up of two new curlers and two experienced players, so the newbies can learn. At the beginning of the season, BCC holds a few Learn-to-Curl sessions, and then the draft leagues help recruits build their skills.

And there is the social aspect. Bonspiels, which can involve up to 24, four-person teams, usually include some shared meals at the clubhouse, which is equipped with a full bar and commercial kitchen. In days gone by, the club even held dances, according to Steve.

Members range from college age to their 70s — about half are 50 and up. This year, there are about 150 full members, 128 of them signed up for leagues, he said. For the year before the pandemic began, there were between 190 and 200 members.

According to Steve, curlers bond around the sport even when they don’t know each other. He told me he has struck up acquaintanceships with strangers based on a shared interest in curling.

Through BCC, he said, he has become friends with people he wouldn’t have met otherwise. “It really comes down to the people and the relationships,” he said, about what keeps him coming back. 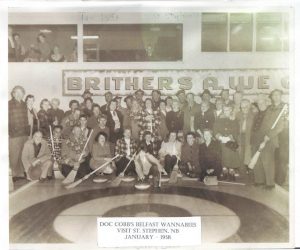 Others had similar stories to tell. Ray St. Onge of Jackson told me, “I always enjoyed watching when it was on. One evening I was talking with (Maine State Sen.) Chip Curry at Rollie’s and he mentioned they had a Learn to Curl coming up. I signed up and had fun. I signed up for league play that day. My first year I curled once a week. In my second year, I curled twice a week. That season was cut short by COVID. This is my third year of actual curling.

“What I enjoy about it is that it is a bright place to be in the darkest time of the year. Everyone is there to enjoy themselves and have fun. I just find the Belfast Club a great group of people that just enjoy a good evening of curling.”