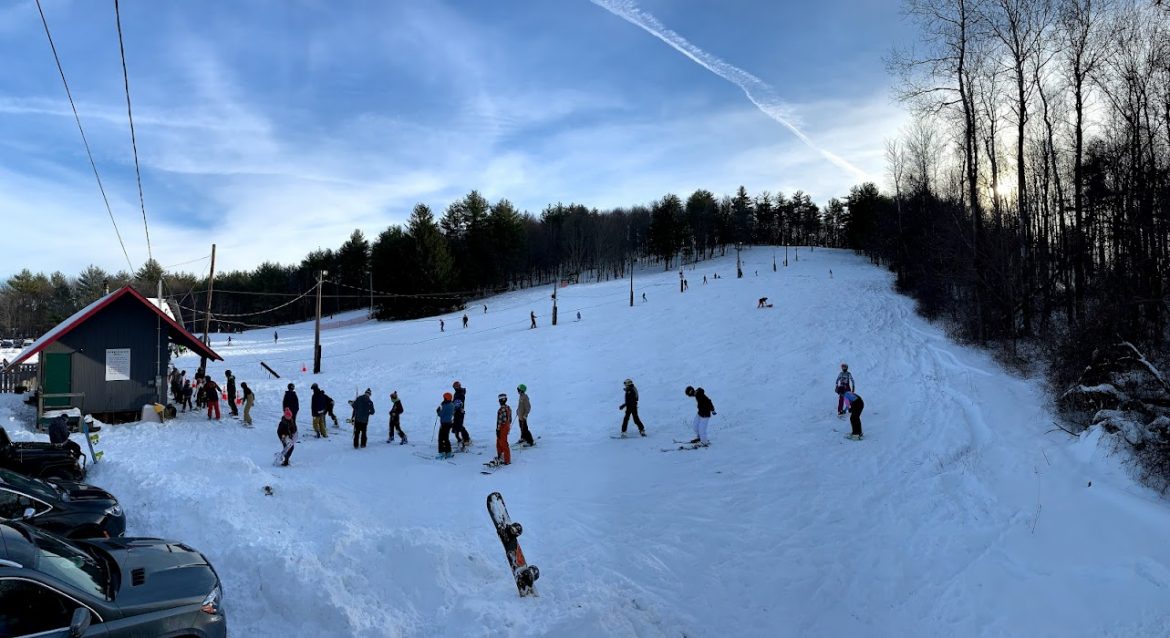 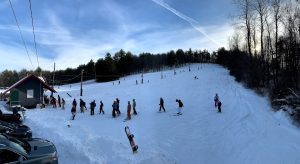 Dan Boyle remembers the moment when he became a Powderhouse Hill Ski Club volunteer. It was back in 2007 when he brought his son to the South Berwick ski area to enjoy some downhill runs.

He quickly learned that the rope tow, powered by an engine housed inside a vintage 1938 Ford pick-up truck at the top of the hill, was not working. When one of the volunteers said they could get it going if someone brought a car battery to the top of the hill, Dan sprang into action, hiked up the 175-foot hill, and got it going again.

From that day on, Dan and his family, along with twenty-eight other families, volunteer their time to provide one of the most affordable and enjoyable skiing and snowboarding experiences south of Portland. Dan, 48, and his wife, Sarah, taught all three of their kids how to ski at Powderhouse. “It was just so much fun to watch them progress.” This is exactly the type of experience that families have enjoyed on this small South Berwick hill for generations. Dan is originally from Hanover, New Hampshire in a town where there was a small ski area called Oak Hill. Thanks to his parents, he skied from a very young age. He graduated from the University of New Hampshire in Durham and fell in love with the Seacoast region before buying a house in South Berwick in 2001.

Today Dan serves as president of the non-profit group that oversees this classic skiing experience. For just five dollars, skiers and snowboarders of all abilities can make as many runs as they wish. “The five-dollar lift ticket is one of the things we have to do. That is the legal contract between the skier and the hill, so we have to charge something,” Dan explained. “We have kept the price at five dollars to cover gasoline prices and other expenses.” 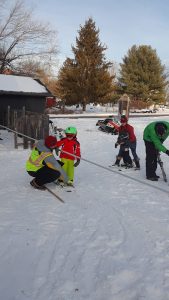 Their reward is realized with the first winter snowfall. Within a few hours after Mother Nature provides a winter wonderland, the small parking lot fills up fast with local residents and families who travel from as far away as Massachusetts and the Portland region.

Pre-COVID, Dan said the volunteers operated a woodstove inside the lodge hut at the bottom of the hill where hot chocolate was served. Now they go with an outdoor firepit. Last winter, Dan said the hill saw a record number of people who came out to enjoy some much needed outdoor recreation. The adjacent sledding and tubing hill that is maintained by the town also sees it share of young and old tearing down the hill in all manner of sleds.

When asked what makes Powderhouse Hill so special, Dan replied that it is the people who believe in their mission who make it happen year after year. “We are all volunteers. Nobody is there for the paycheck. We are all passionate about skiing. I don’t think there is a paycheck in the world when you see a kid who is learning to ski and make their first run and says to their mom and dad, ‘I’m doing it! I’m doing it!’”

The positive experience combined with its affordability make it much easier for parents to teach their children how to ski. Powderhouse Hill Ski Area is also much easier for families to reach for a day trip than if they had to trek further north to more upscale resorts like Sunday River and Sugar Bush. Another thing that people really enjoy about skiing and snowboarding at Powderhouse Hill is that the it is so accessible to people of all abilities, Dan said.

The volunteers see beginner skiers and snowboarders to more experienced skiers who are passholders at Sunday River and just want to drive a short distance from home to ski for a few hours. Thanks to Powderhouse’ night skiing on Wednesday and Friday nights from 7 p.m. to 9 p.m., this is easy. 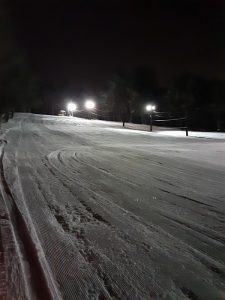 There is also a real feeling of community at Powderhouse where people on the lift will be cheering for a total stranger who is learning to ski and successfully makes their first run. “You see your neighbors, You see your friends. It’s real small-town skiing,” Dan said. Last winter, Dan recalled how he met a father with twin girls who wanted to ski at Powderhouse. They had used, hand me down ski equipment. They chose Powderhouse because they wanted to ski more than they might have been able to ski at a larger ski area. By the end of the 2020-2021 ski season, Dan said they ability greatly improved. “It felt good to make a difference for that family,” Dan said.

Powderhouse has also managed to overcome some of the obstacles that have shut down many other small, ski areas in New England, Dan said. For example, the lack of liability insurance almost shut Powderhouse Hill down in 2009. The non-profit group that operates the ski area could not afford to carry such a policy so the town decided to absorb Powderhouse Hill into the recreation department.

“We’re very fortunate that we are covered under the town’s insurance policy,” Dan said. The insurance company only sees Powderhouse as a ski hill when the lift is running, he added.

The rope tow was rebuilt for the 2010-2011 season to improve reliability and Powderhouse even experimented with snowmaking in 2014. One thing that has stayed the same is the original rope tow that is still powered by the rear wheel axle housed inside the vintage 1938 Ford pick-up truck. The original engine has since been replaced with an engine from a 1950s Wisconsin truck engine, Dan said.

Overall, the future looks bright for Powderhouse Hill Ski Area at a time when most of New England’s rope tow areas have vanished. The South Berwick Renaissance, which has seen several new restaurants and shops, and the new Stage House Inn will only bring more winter outdoor enthusiasts to the hill.

Thanks to the volunteers who make it all work each winter, Dan believes they will fulfill their mission to attract more skiers and potential members. “We want them to be ready to go the next time and be excited to go again.”