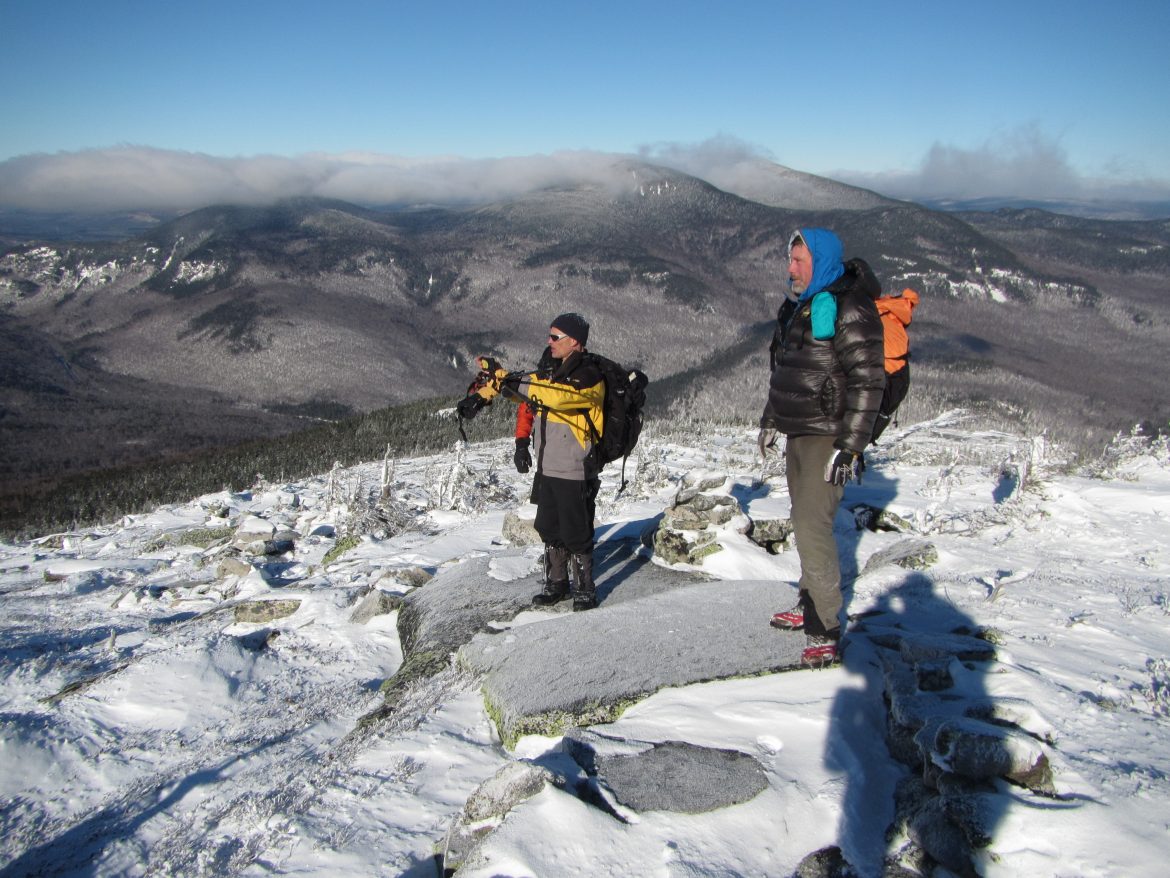 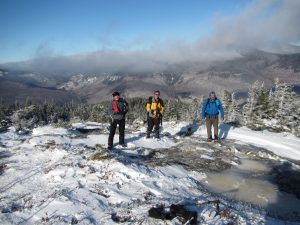 Sunday River Whitecap is one of the most unique mountain hikes in Maine.  Rugged terrain, phenomenal views, and a barren alpine summit provide a remarkable winter mountaineering experience.

Located on the northeastern end of the Mahoosuc Range in far western Maine, climbing the 3,337-foot peak entails about 2,100 feet of elevation gain while negotiating a variety of trail conditions.  The Grafton Notch Loop Trail is the normal route to the summit.  From Route 26 in North Newry, the fourteen-mile out and back trek is an arduous winter expedition.  For about three decades, Chowderheads with the Penobscot Paddle and Chowder Society (PPCS) have been scaling Sunday River Whitecap via an esoteric six-mile roundtrip alternative route.

Scheduled to lead a mid-January PPCS winter mountain hike, Sunday River Whitecap was my choice.  Unaware of snow depth in the Mahoosucs, a primary concern was to snowshoe or not to snowshoe. Full disclosure, for me snowshoeing is a means to an end.  If I can get to the top of a mountain without using them, that’s my preference.  During my last Sunday River Whitecap outing, a companion and I toted snowshoes for the entire trip never needing them.  At my age, I’m pacing my arthritic joints and attempting to postpone their inevitable demise.  Senselessly carrying added weight is a non-starter.

Several club members responded to my inquiry regarding snow levels in the Mahoosucs.  Their reports indicated about ten inches of snow accumulation could be anticipated and snowshoes were probably unnecessary.  Our plan was to take them to the trailhead before making a final decision. 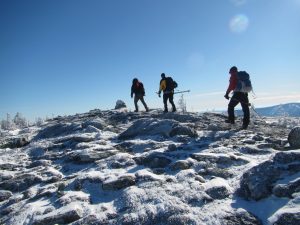 Six of us met in a clearing at the junction of Routes 2 and 26 in Newry on a sunny, breezy winter day with temperatures in the low twenties.  Since parking was expected to be limited at the esoteric trailhead, we masked and teamed up in pairs for the nine-mile drive north on Route 26 to an old dirt road on the left between Screw Auger Falls and Grafton Notch. A snowplow had cleared space sufficient for a few vehicles.

Inspection at the trailhead indicated the ten-inch snow prediction was accurate.  As the snow had a very light consistency, our decision was settled, no snowshoes.  Anticipating gusty winds and low temperatures above the tree line, we packed for extreme winter conditions.  Everyone carried ice cleats, some wearing them from the outset.

Our intrepid band began the journey by crossing a bridge over Bear River before following the passageway as it rose steadily south.  Just beyond the bridge, Snowmobile Route 82 ITS joined from the right.  For the first time in my experience, no snowmobile tracks were evident.  Insufficient snow accumulation is the probable explanation.

Turning left, the gradient moderated as our team traveled easterly.  About a mile from the trailhead, the start of what was formerly a bush whack was detected on the right.  Due to occasional usage and some trail markings, a fairly obvious path has evolved that leads through a scattered conifer and hardwood forest.  Persevering uphill for approximately a mile, we connected with Grafton Notch Loop Trail in Miles Notch. 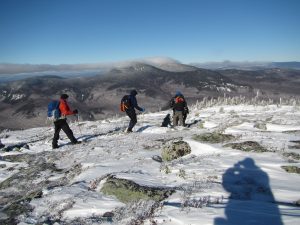 After progressing southeasterly on the loop trail for a short distance, our tenacious group of mountaineers angled right and began climbing steeply south on the north shoulder of Whitecap in a dense conifer growth.  Scrambling up a narrow gully amidst a consequential rock formation, we emerged onto the lower end of an extensive alpine zone where exceptional views of the northern Mahoosucs awaited us.  Encountering frigid wind chills and sporadic icy footing, everyone donned parkas and ice cleats.

A formidable topography of wind-swept ice-covered surfaces and drifted snow complicated by a labyrinth of patchy mountain scrub confronted us.  Trail finding became much more problematic.  Cautiously surmounting an icebound escarpment and approaching the summit cone, we were unable to locate critical trail cairns.   Advancing directly upward as safely as possible seemed our best strategy.

Doggedly persisting up the cone, a snow-encrusted cairn was serendipitously observed to our right.  Back on the trail, the remaining route to the blustery summit was easily discernable.  Shelter from the piercing gusts was found on the southwest side of the crest where a respite enjoying much needed snacks was overdue. 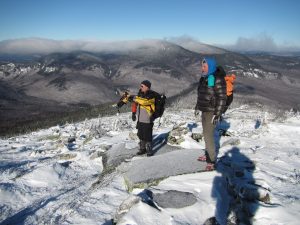 Departing the summit, two hikers were passed.  They were the only other alpine adventurers fortunate enough to experience the dramatic Sunday River Whitecap on that glorious day.

Would snowshoes have been beneficial on the descent?  I think so.