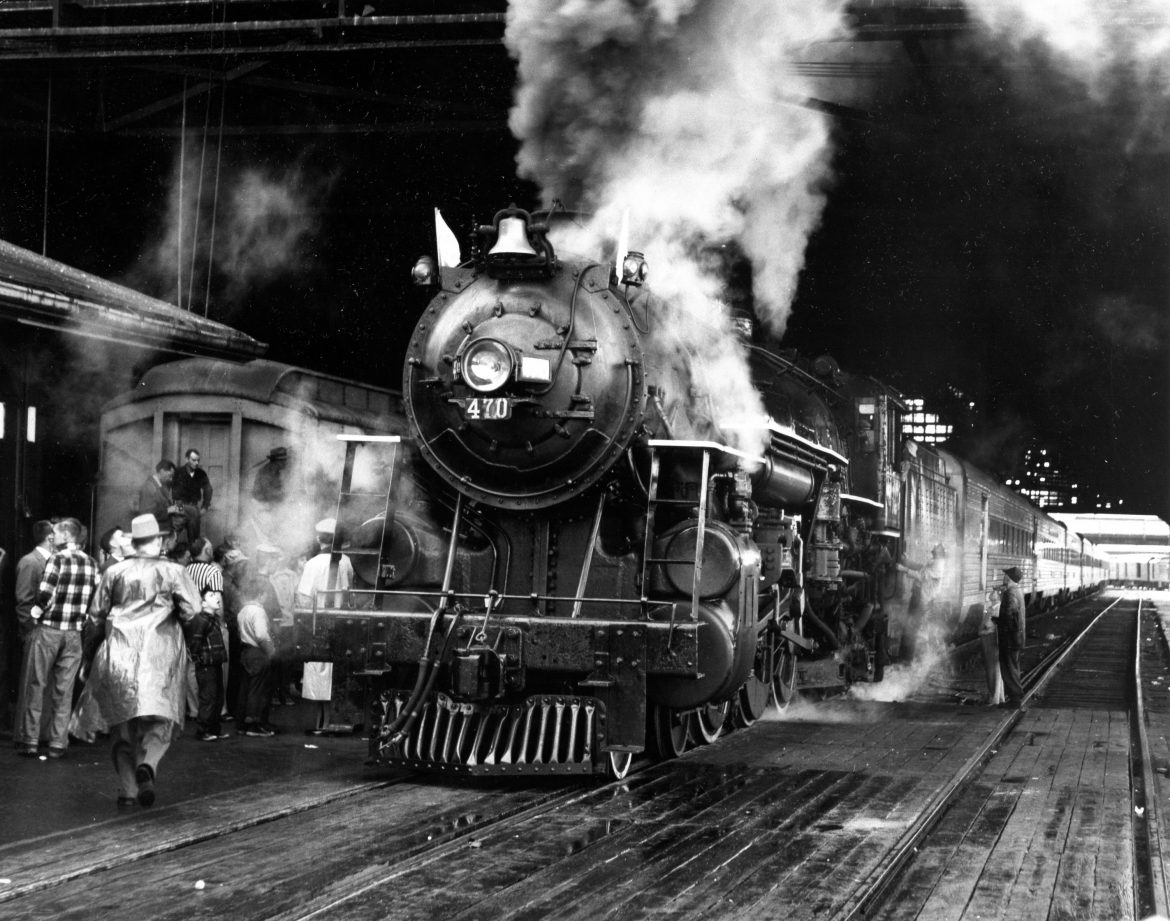 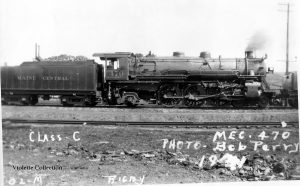 “We are literally going to know every nut, bolt, and rivet on this thing before we’re done,” says Leverett Fernald as he stands assessing the nearly170 tons of a restoration project underway. The retired machinist from Cianbro is President of the New England Steam Corporation (NESCo), a nonprofit organization established for the mission of restoring the Maine Central 470, one of only three MEC steam locomotives in existence in the country.

In addition, Leverett is the mechanical officer for both the Downeast Scenic Railroad, in Hancock bordering Ellsworth, and NESCo assuring all the equipment is in compliance with the Federal Railroad Administration. He is an encyclopedia of knowledge when it comes to this engineering marvel. Add to this his quick wit and you have an afternoon of an amazing education in an enclosed building housing a monument of steel in the Downeast Scenic Railroad yard. “It’s a process,” says Leverett with a chuckle as he shows off the rebuilt tender designed to hold the coal and water, the cab which is a mere shell, and the stripped-down boiler which requires imagination to envision its original beauty.

The 470 was built in 1924 by the American Locomotive Company in Schenectady, New York. The locomotive traversed a thriving and elite passenger market serving stops between Boston, Bangor, and Bar Harbor. The growth in diesel power led the 470 to its final run in 1954 during a nationally publicized event that attracted widespread spectators from Portland to Bangor. After its final departure, the 470 was put on display in Waterville where it fell victim to Maine’s winters and vandalism for close to sixty years.

“It’s a living breathing machine,” says Richard Glueck, the former president of NESCo. The first mission was to raise funds to purchase the locomotive from the city and then relocate the 470 for the beginning of a long and what appears to be an arduous restoration. This all began in 2011. 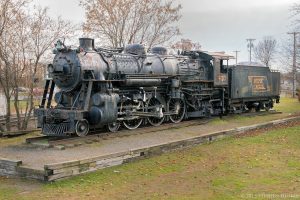 These two train buffs along with a handful of volunteers have been immersed in this weekend hobby for over the past ten years. It’s a passion for not only restoring a legacy but preserving the trades. Richard claims there are three primary objectives in this project: preservation, education, and heritage tourism.

The volunteers range from retired folks with a love for the railroad industry, to young women with varied career paths, to college students. Five UMaine Mechanical Engineering students were introduced to the restoration project. “They took on the job of rebuilding the steam powered air pump for the air brakes as their capstone project. These are kids who have only seen a steam locomotive in picture books or on YouTube,” says Richard.

One of the UMaine student volunteers is Alden Burns who embraced the task at hand, “When I first started, I was working on stripping down the boiler and the firebox.” He goes on, “Per federal regulation, the entire boiler must be ultrasonically tested. I learned a lot in this process, and not just about steam locomotives. It’s quite an ambitious effort and requires a lot of dedication.”

A dedicated volunteer is Hanna Brooks, a UMaine doctoral student studying geology. “I work with fragile and expensive things in my work and studies, so here in the railroad yard, I can bang on stuff and not worry about destroying anything,” she offers with a smile. She adds, “I am learning new skills and I think it’s more about learning how to roll with anything.”

Retired military mechanic Ron Jenkins has been volunteering his time on the 470 with his eyes to the future, “I keep seeing and hearing that first chuff out of the stack as 470 begins to move under its own power.” Ron is no stranger to the rail, “My father was an engineer for the Maine Central and Portland Terminal Railroads and as a child I would quite often go to work with him. Even my grandfather was an engineer for the Boston and Maine and the Bangor and Aroostook Railroads.” 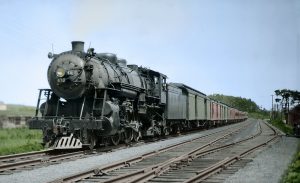 Ron says, “I knew it would be a long, difficult process. Keeping the big picture in the back of the mind, it helps to focus on the individual tasks.” He adds, “It seems less overwhelming that way.” Ron’s brother also volunteers on the 470.

“A lot of people have no idea this even exists, yet the steam locomotive is art; it’s literature, it’s music and it’s science all here in such an indescribable machine,” says Richard. “I’d like to think that we are a bit of visionaries but also realists. This engine and this mission is going to need a great deal of support.” He goes on, “Any kind of artifacts that relate to Maine Central steam that can be donated is material that will bring in funding or be used on the loco or used in an established museum eventually.”

The ultimate desire is to have the locomotive – an engineering wonder – back on the tracks offering a taste of the amazing technology of its day with a scenic venue. While NESCo is responsible for raising the money and restoring the locomotive, the Downeast Scenic Railroad will be responsible for operating the locomotive when it is done. “As of now, there is about five miles of track out of Washington Junction, but the goal is to rebuild enough track to roll the 470 to Green Lake and back,” adds Leverett. 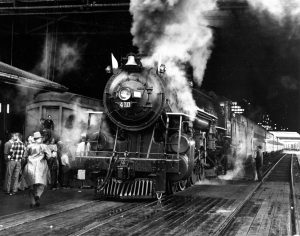 Knowing the funds and time needed for this multi-faceted, precise restoration projection, Leverett notes between in kind donations and volunteers some $850,000 has been invested on the 470. As he stands among the components of the locomotive he says, “If we had a million dollar donation and perhaps five years, that would put us in pretty good shape.”

He concludes, “I guess I would say that all of us are committed to this project to a certain extent, and the more you know about a project, the deeper you tend to get into it because you know what needs to be done, so you jump in and do it.”

To learn more about MEC 470’s restoration, www.newenglandsteam.org and  www.facebook.com/MCSL470Restore