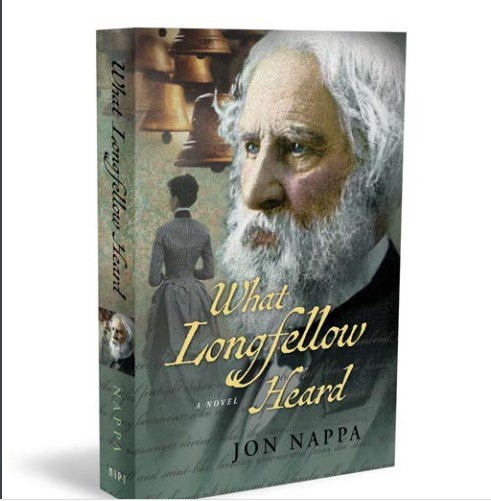 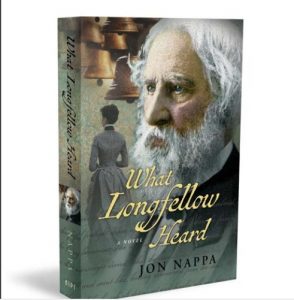 Some people have forgotten that Maine-born Henry Wadsworth Longfellow was enormously famous in his day. Adults and children celebrated his poems, both in America and abroad. He was the first American poet admitted into the Poets’ Corner of Westminster Abbey in England and was renowned for such works as “Hiawatha,” “Paul Revere’s Ride,” “Evangeline,” “Tales of a Way-side Inn” and others. However, his life was wrought with trials and heartaches during an era when America was laboring to grow up without destroying itself in the process.  Writing with passion and entertaining wit, Camden-based author, Jon Nappa has authored a much-praised, compelling, and riveting novel laced with poetry that chronicles Henry Wadsworth Longfellow’s journey from childhood to immortality.

The book is part meta novel, part memoir.  It is a powerful retelling that uses many words and musings of the poet himself, from his tragic quest for love and family, his longing for art and fame, to his ultimate contribution to American letters. Discover how Longfellow’s art and faith wrestled within him while he desperately tried to make peace with the tumult of his times. Experience the tragedy of his first marriage, his long road to recovery, and his passion for the woman he pursued for seven years while the nation fractured, and his poetry soared. What Longfellow Heard is a novel with profound relevance to our modern-day polarization, increasingly clouded national identities, and the universal aching for peace, joy, and purpose amid conflict and confusion.

Author Jon Nappa and his wife, Julianne, honeymooned in Maine thirty years ago and vowed to return to reside there if it ever became possible. They returned seventeen years later with four children, two horses, and the hopes of raising their family and pursuing their dreams along the mid-coast. Once here, Jon got to work on what became for him an obsession with Longfellow and his era. For Nappa, he was no stranger to creative projects requiring years to incubate.

He was the original writer, producer, and director of Pappyland, which aired on TLC and PBS for seven years and was named by TV Guide as one of the ten best television shows for kids. His work on the fantasy-drama feature film screenplay, We the People, a story about American forefathers returning to modern day America to inspire a disillusioned Senator, earned Nappa an invitation to Skywalker Ranch to personally meet with George Lucas. He was also the lead writer for the Debbie Reynolds, Todd & Carrie Fisher Hollywood Motion Picture Studio and an episodic writer for Michael Landon, Jr.’s Hallmark Television series, When Calls the Heart. He wrote two movies-of-the-week for INSP entitled Hawkridge and County Line. 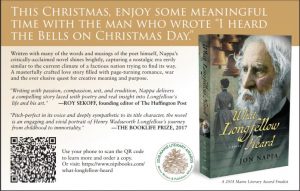 His two historical novels for NavPress, Storm Warriors and Storm Survivors, resulted in the formation of an international 501(C)3 organization (stormwarriorsmediafoundation.org) that has raised millions of dollars in support of humanitarian projects in Maine and New England. The non-profit is also headquartered in Camden and has gifted custom-made media tools to over twenty non-profits working in fourteen different sectors of humanitarian crisis, including human trafficking and domestic violence.

His most recent historical novel, What Longfellow Heard, was a 2018 Maine Literary Awards finalist and has been critically acclaimed by several well-known authors, publishers and schoolteachers.

And Pulitzer Prize-winning Richard Russo added, “I really liked it. Henry comes vibrantly to life in these pages, and the way Nappa massages in Longfellow’s poetry and writing process is very deft.”

Schoolteacher Susan F Bean gave it a five-star Amazon review, stating, “As a former teacher at Longfellow School, this book illuminated what we taught and learned about Henry. The first-person point of view was fresh, and his voice clearly came through. Well researched and authentic. Loved it!”

What Longfellow Heard can be purchased directly from the author at nipibooks.com, in many of the independent bookstores throughout Maine, including all the Sherman’s bookstores, Zoot’s Coffee, and the Owl & Turtle Bookshop in Camden, Maine, and online wherever books are sold.