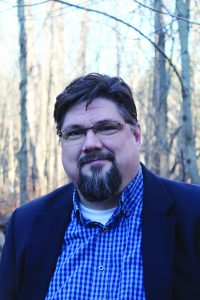 Daniel Dunkle is a writer’s writer. As news director of Rockland’s Courier Gazette, The Camden Herald and the Belfast Republican Journal, he lives in a sea of journalism, but his personal passion is creating unique and classic fiction.

His newest book is called Let’s Be Monsters.

He talks about his latest tale, saying, “It was the dead of winter, 2019. I wanted to write about my hometown and growing up there and all that kind of stuff. But I didn’t want to do this Jean Shepherd kind of thing, because I’d already kind of done that in my columns in the newspaper. I was feeling kinda grumpy and it was dark and snowy outside. I decided on the idea of kids being monsters. I thought about horror stories, and I thought, “What if the kids were the monsters? And I thought about vampires immediately … because I’ve been a fan of vampires forever.”

His creative process was rolling. He says, “I had this idea for them to live in a tree house. And that really got me cooking because then I thought, what about two vampires living in a tree house together who happened to be twelve-year-old vampires?”

“So, I just started writing, and the story evolved into being about how my hometown changed over the years, and the different kinds of characters who live in small towns.”

“I’m selling it through Amazon. It’s a labor of love and it’s fun to see. I’ve been getting some good response, which is really nice.”

Nothing in this process is new for Dan Dunkle.

“I’ve wanted to be a writer since I was ten years old. I read this book by CS Lewis, The Horse and His Boy. It’s one of the Narnia books, and I loved it. It was the first book that really got hold of me.

“The only thing? I thought there needed to be dragons in it. I was disappointed that it didn’t have any. So, I was like, well, I could write a story of my own that has dragons in it. When that little switch flipped, I was like, ‘Ok, I’ll be a writer. I’ll make up my own stories.” 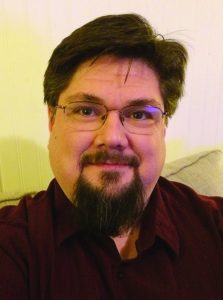 “And so, it’s been a lifelong dream. I’ve been writing short stories and books and getting them rejected forever. When I got to be forty-five, I was saying, ‘Well, I’ve been at this thirty-five years. If it’s my dream to have a book on the shelf with my name on it, I better make it happen. So, I self-published my first book, The Scrimshaw Worm, in 2018. It was a historical fiction novel that I had been working on for seven years because of the research that was involved. It was set on a whaling ship in the 1800s, but it had kind of a plot similar to the movie Alien where they get a monster on the ship, and it starts picking the people off.”

“I thought it was brilliant, of course,” Dan says with a smile. “But then I realized that whaling might not be great for everyone. Alot of people have Moby Dick anxiety because somebody made them read Moby Dick at some point in school. I personally love Moby Dick, but some people were like, ‘Oh no, whaling. No!.’”

“It sold pretty well. So, then I started working on Let’s Be Monsters.”

Dan grew up in Hampden and graduated from the University of Maine at Orono.

“And when I got out of college, I wanted to be a writer, and newspapers was where I gravitated. I got hired by the Courier Gazette in 1998. I was twenty-five at the time.

It was exciting to finally have words that I wrote appearing in print, to have the ink on the page. And I was taking photos and writing stories about fires and car crashes and school board meetings. I was seeing my name in print, and it was thrilling. And I loved the whole newsroom thing. I really felt at home with the people. They are feisty and funny, and they felt like my people. And being able to write something today and have it out on the street tomorrow? I loved it.”

Following publication of The Scrimshaw Worm, he received a Maine Literary Award for Speculative Fiction from the Maine Writers & Publishers Alliance.

Dan says, “It’s not a lucrative thing by any stretch of imagination, but it’s fun. It’s nice to have that outlet for my creativity.”

Asked who is his target audience, he mused, “I don’t know if I write for children or adults. I’m a child at heart in many ways, so there is a certain youthful energy to a lot of the things I write. But I never can keep them from having vampires and bloodletting and violence. I don’t worry too much about that. I think if someone is in their teens, they can read Let’s Be Monsters and be fine. I read Stephen King books when I was about thirteen and it did not hurt me any. So, I think if a kid is going to sit and read something under the covers with a flashlight, at least they are reading instead of staring at a screen. These days I’ve been working on a collection of short stories, which I really enjoy. They are horror short stories, of course. And that genre really lends itself to the short story. I just love doing it. But the idea that you’re just going to write a book and immediately be famous? It just doesn’t work that way. The key is? Find your audience. You find the specific audience for your particular work and then you can do anything you want to do.”

Our readers have come to love the writings of Dan Dunkle’s stories in Maine Seniors Magazine. His pen is truly laced in genius.