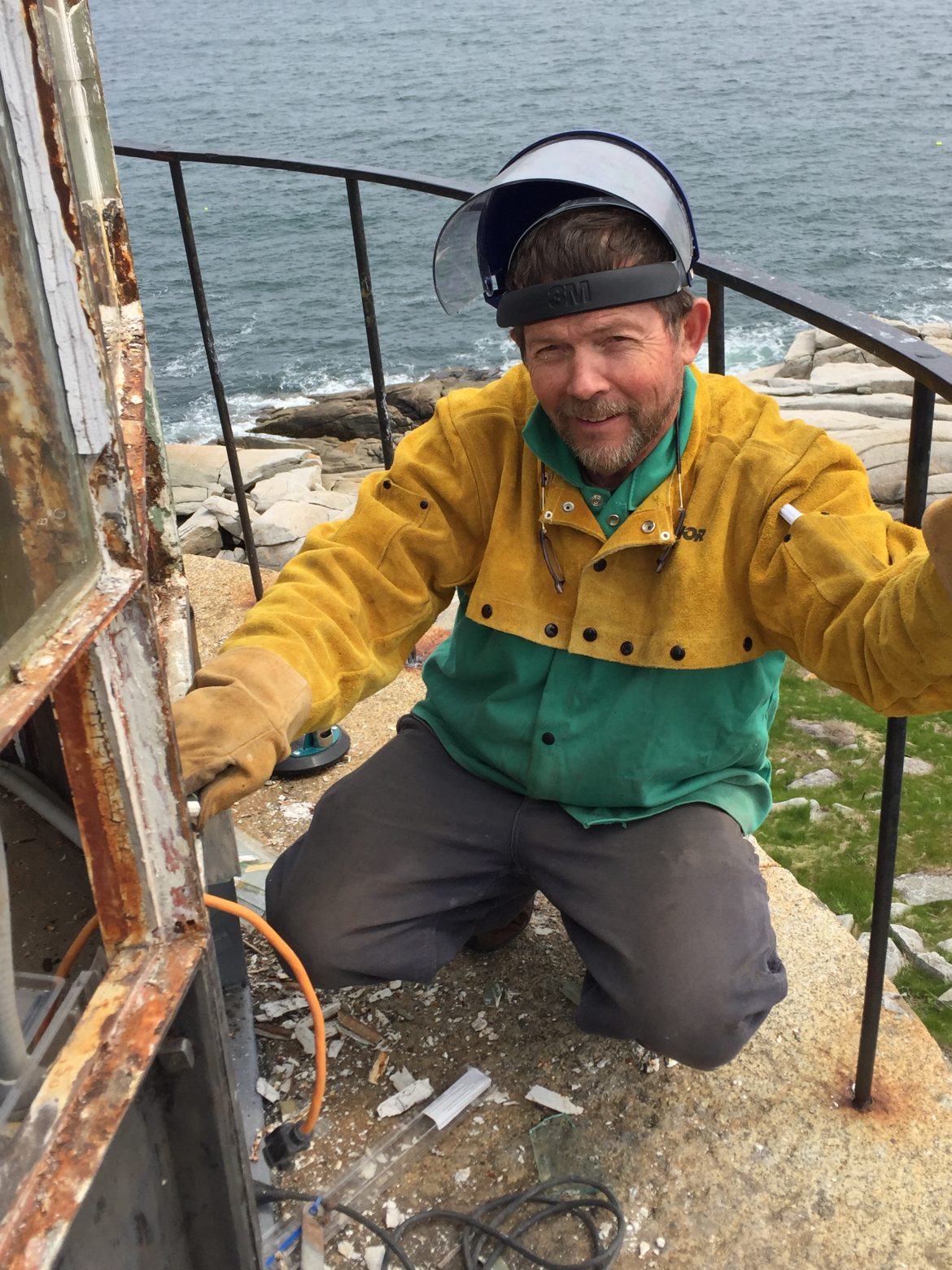 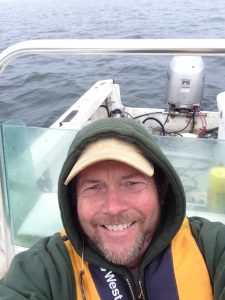 Anyone who knows Jim Leslie wouldn’t be surprised to see decorations of Maine lighthouses or miniatures of many of the state’s most iconic beacons displayed in his living room in South Berwick. The truth is he has actually renovated and repaired many of them.

Jim’s company, JB Leslie Co. Inc., just completed an extensive renovation project at Nubble Lighthouse in York Beach that was five years in the making. For someone who grew up in York, that project was pretty special.

“The entire place was in pretty rough shape. The tower had not been done since 1975,” Jim explained. “We removed all the paint from the outside, repainted it, and we had to use special equipment to do that.”

Like many of the lighthouses that Jim has worked at, getting his crew and equipment to each one is always a challenge in itself. Nubble Light has an electric powered tram that can hold up to six hundred pounds that crosses a short distance from the parking area where tourists gather to the small island it occupies.

Jim and his twelve-member crew used a small rubber boat and a dingy without a motor because of the presence of undersea divers who frequent that area.

The work also had to conform to Maine Historic Preservation Council and National Register of Historic Places guidelines. Anything that has to be replaced must be replaced with the same kind of wood, motor and other building materials that were used when Nubble was first built in 1879, Jim said. 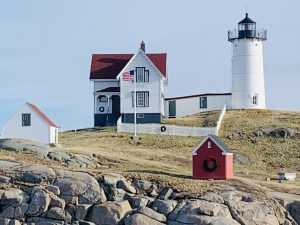 All told, York voters appropriated more than $350,000 to pay for all of the repairs and maintenance needed. $103,000 of that sum was raised from proceeds generated by the Sohier Park Gift Shop that enabled Jim’s company to create an exact replica of the cedar wood that made up the original gingerbread-style trim. They also replaced and repaired rotten wood, replaced gutters and foundation repairs.

Nearly everything was repaired, re-painted and restored on every building from top to bottom.

When asked how many lighthouses his company works on each year, Jim said it varies from five to six in 2021 to as many as ten lighthouses in a given year.  Over the last twenty-plus years, Jim has worked on twenty-one of Maine’s sixty-four lighthouses and two beacons in New Hampshire: Portsmouth Harbor Light and White Island in the Isles of Shoals. His extensive experience gained from working on so many lighthouses up and down the coast makes Jim a lighthouse whisperer who understands what each project requires and appreciates the history connected with each beacon.

“The work we do on all of them is different,” Jim said. Most of them are on the National Register of Historic Places and each project has very specific requirements. It is also a challenge to transport men and materials from the mainland to the lighthouses. 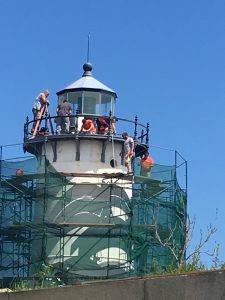 For example, Jim said that when they worked on the Wood Island Lighthouse located in Saco from 2010 to 2015, they needed a large boat to transport his crew, equipment and building materials to a small mooring where they used a small boat to get everything ashore. They everything had to be moved another mile along the boardwalk to get to the lighthouse. In some cases, the crew will stay either at the job site with enough food and provisions until the job is done to cut down on the transportation.

Most of the work takes place from late spring through the fall each year, but his company has also done work on remote lighthouses during the winter months where weather is always an issue. In 2020, Jim said his crew painted the top of Whaleback Light near Portsmouth, N.H. There were days when the Piscataqua River current was so rough they could not get their small boat out there. When the current was going out and his crew was heading back to the mainland, they would encounter fifteen-foot high waves, Jim said.

Following Hurricane Sandy in August 2011, Jim recalled his company was asked to repair damage to the Goat Island Lighthouse owned by the Kennebunkport Conservation Trust. The storm was so fierce that nearly the entire island was underwater at times. Jim and his crew spent hours rolling rocks back into the water.

So how did Jim Leslie get into the lighthouse repair and restoration business? He said it was really unexpected how it happened. 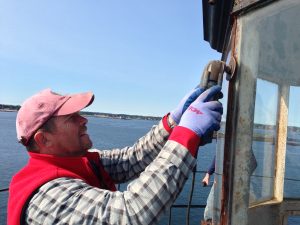 Jim began his construction career in 1976 and his main trade is as a bricklayer and mason. He formed his own company in 1986. His company was working on the Marshman House on Star Island during the winter of 1998 and 1999. A short time later, Jim submitted a bid to work on the White Island Light project for a company that he worked with on various projects. The brick tower was built in 1881. “We kept it from falling into the water,” he recalled.

It was then he realized that he should just bid on these projects. His company did some repair work at Two Lights in Cape Elizabeth shortly thereafter. In 2007, the American Lighthouse Foundation hired Jim’s company to work on Pemaquid Point Lighthouse. Monhegan Light followed in 2008 after they were hired by the Monhegan Historical Society.

If there is a lighthouse that Jim has not repaired or restored yet, it is simply because he hasn’t been able to fit it in with his busy schedule. “I would love to do Marshall Point Light, but I just couldn’t get to it.”

He would also like to work on Matinicus Island Light located some twenty miles off shore from Midcoast Maine.

Jim acknowledges that if he chose to work on other types of construction projects, he could make more money, but he enjoys working on lighthouses so much he is willing to make less.

“I would never say it’s highly profitable. You do it because you love to do it,” Jim observed.

“The whole adventure of doing that and traveling up and down the coast is what I have really enjoyed,” Jim said. “The challenge is big for me and meeting different people. I have friends all over the state.”

He said he was scheduled to look at three lighthouse projects this winter. 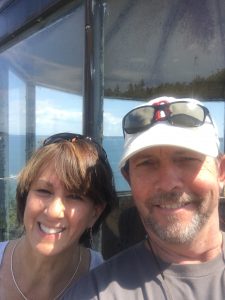 Interestingly enough, the State of Maine does not provide any funding to maintain its lighthouses despite the fact they are huge tourism draws that attract visitors from all over the world.

At sixty-three, Jim cannot say how many more years he will be leading the charge to restore and repair Maine’s lighthouses. He can see himself serving as a consultant when his days of adventure come to end. He also hopes another company will be able to carry on the work that his firm currently does.

But for now, the challenge of tackling another lighthouse project is first and foremost on his mind.

“If someone says to me, ‘Hey, do you want to go out and look at this lighthouse,’ I can’t wait to go.”