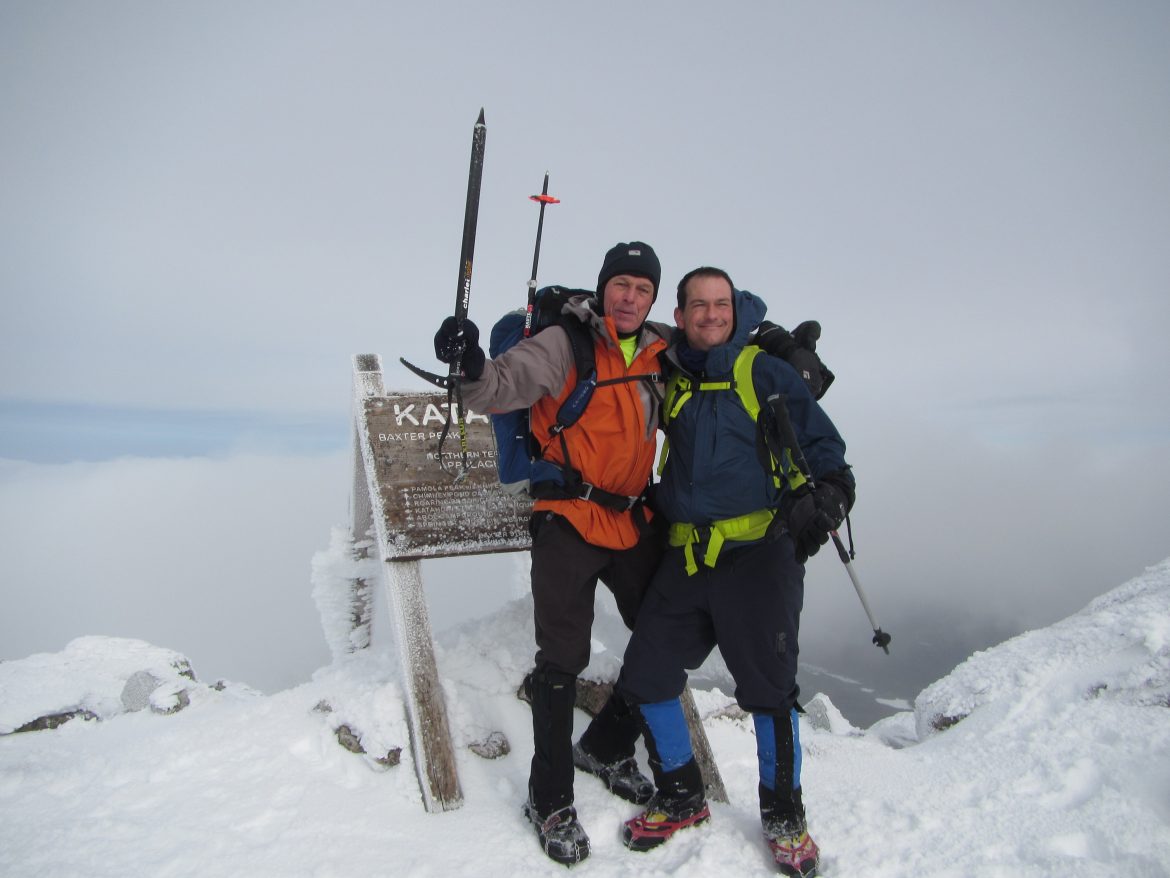 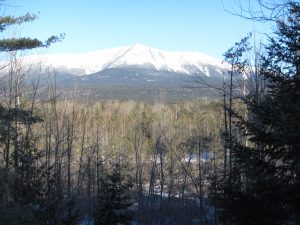 Most hikers and climbers consider ascending Mount Katahdin in winter to be Maine’s ultimate mountaineering achievement. My last excursion three years prior had been a disappointment. Suffering with arthritic hips, I was in constant pain when pulling a gear-laden sled and both attempts to summit were turned back by hazardous weather. Since the trip to and from Chimney Pond in Baxter State Park requires hauling a sled for about 24 miles, I believed my winter climbs on Mount Katahdin were over.

When my son, Adam, invited me to join him and a group of ice climbing friends for a six-day February expedition to Chimney Pond, I wanted to go but 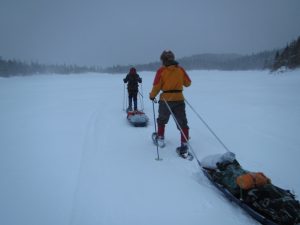 was skeptical that it would work. My hips were the primary concern. Traveling with six companions young enough to be my children also seemed daunting. Since Adam and I had shared several previous Baxter winter trips that included three successful quests of Mount Katahdin, the prospect of a final winter outing in the park together was a strong motivator.

The healthcare profession delivered for me. I was able to obtain cortisone injections in both hips a few days before the start date. Two questions remained. What did Mother Nature have in store for us, and could this old man keep up with the kids? Not an ice climber, my primary goal was to ascend Baxter and Hamlin Peaks. Surviving was a strong second. 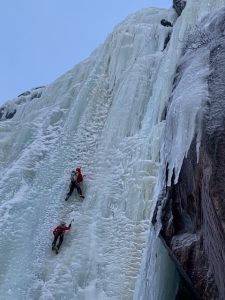 Our journey began at Togue Pond Gate, the southern entrance to the park. The first day entailed an 8.3-mile sled pull to a bunkhouse at Roaring Brook Campground. Hiking boots, snowshoes, crampons, or skis were the choices for footgear. Since Roaring Brook Road had a hard-packed snow surface most of us began the expedition wearing just hiking boots. Our sleds weighed 60 to 80 pounds. Ominously, a snowstorm was forecast for the following day.

I mentally separate the haul to Roaring Brook into three waypoints: Rum Brook, Windy Pitch, and Avalanche Field. While much of it is a gradual upward incline, several substantial hills constitute Windy Pitch at about the midpoint. It took us about four hours to reach the bunkhouse. Once there, we soon had a warm fire going in the woodstove, a water supply was retrieved from Roaring Brook, and seven of us, six guys and one gal, relaxed in the cozy cabin. Since the snowstorm was predicted to arrive the following morning, we resolved to be on the trail early hoping to avoid the need to break trail in deep snow. Minor calamity struck during the night as one member of the group decided to refrigerate some of his food outside. Pine martens feasted on everything except the maple syrup. 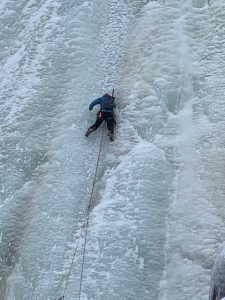 Snow was falling steadily, and the wind was blowing when we left the campground before dawn wearing snowshoes for the arduous 3.3-mile climb to Chimney Pond. Fortunately, only a few inches of snow had accumulated. Leaving Roaring Brook behind, the path began ascending abruptly. A little beyond the halfway point, the winter trail crossed blustery Basin Pond which provided us with temporary relief from the steep ascent. The most consequential pitch of the day soon followed. Arriving at Chimney Pond Campground was a welcome deliverance. After settling into the bunkhouse, one of my young companions joined me for a one-mile snowshoe to Blueberry Knoll which is located at the bottom of North Basin. We did not stay long as the winds were gusting to an estimated 50 miles per hour.

A foot of fresh snowfall greeted us when we awoke the following morning. The summit forecast posted at the ranger station reported moderate winds, cloudy skies, a chance of snow showers, and temperatures in the twenties were anticipated.

My six ice climbing companions were intent on scaling the formidable Pamola Ice Cliffs which dominate the south wall of nearby Chimney Pond Cirque. I decided to attempt a climb of Hamlin Peak, Maine’s second highest point, via majestic Hamlin Ridge. Hiking solo, I planned to turn back at the first sign of unsafe conditions.

Breaking trail with snowshoes in the new accumulation was rigorous but after about two hours I advanced above tree line on the lower slope of Hamlin Ridge. Hiking conditions improved substantially on a predominantly hard-packed snow surface as I entered murky clouds on the steep boulder-strewn prominence. Switching to crampons, I emerged above the clouds to experience a glorious vista of Pamola and Baxter Peaks connected by rugged Knife Edge. Clear skies offered an unobstructed view of the remainder of the ridge above. Light winds and sunshine assured me a safe climb could be achieved. After angling right on the shoulder of Hamlin Peak, ice-encrusted trail cairns led abruptly upward along the sheer rim of North Basin to the rounded summit where the mountain gods welcomed me with a dazzling rainbow.

Following a leisurely respite, my cautious descent was uneventful. Arriving back at Chimney Pond, the accomplished ice climbers were still executing daring maneuvers on the vertiginous wall. There they remained until almost dark.

That evening, Adam and I decided to try an ascent of the Katahdin highpoint, Baxter Peak, the following day if the morning summit forecast was favorable. The entire group embraced the endeavor. Since the ranger disclosed there might be some avalanche danger on the upper Saddle Trail, Cathedral Ridge was the unanimous choice for our route.

The posted forecast the next day called for partly cloudy skies with moderate winds. Single digit chill factors could be expected. Stormy weather was predicted for the ensuing two days so this would likely be our only chance to summit. We were soon progressing up the trail on snowshoes towards Cathedral Ridge.

The avalanche risk at the foot of the imposing ridge appeared negligible so we proceeded with confidence up the steep lower slope of first Cathedral. Three immense escarpments called Cathedrals constitute precipitous Cathedral Ridge. Encountering patchy ice and hardened snow on a rocky pitch, we converted to crampons. After guardedly negotiating over the first two Cathedrals, our efforts were rewarded with a spectacular view of Knife Edge. As we persisted above the third Cathedral, winds increased in intensity from the northwest. Obvious trail cairns in a barren wind-swept sub-arctic environment marked the remainder of the trail to the summit.

Arriving at the top of Maine in the winter is always a reason for celebration. To again reach it with Adam was particularly rewarding. Deep snow and strong winds made crossing Knife Edge too treacherous an undertaking. Given frigid wind chills, we did not linger long. After prudently descending the potentially hazardous Cathedral Ridge, the youngsters safely escorted a senior citizen not acting his age back to the bunkhouse.

The fifth day of the expedition was a tale of two weather patterns, beautiful in the morning and stormy in the afternoon. Three members returned to the Pamola Ice Cliffs for another day of dramatic ice climbing while Adam and I enjoyed an exhilarating snowshoe to the top of North Basin, arguably the most scenic location in Maine.

It was snowing during the 11.6-mile sled pull to Togue Pond Gate on the final day. Our primary downhill trek was completed in about five and a half hours. For me, it was the most satisfying Baxter trip ever. I will join the kids again next year.

Author of “The Great Mars Hill Bank Robbery” and “Mountains for Mortals – New England,” Ron Chase resides in Topsham. His latest book, “MAINE AL FRESCO: The Fifty Finest Outdoor Adventures in Maine” is now available for pre-order (Maine Al Fresco (northcountrypress.com). Visit his website at www.ronchaseoutdoors.com or he can be contacted at ronchaseoutdoors@comcast.net.