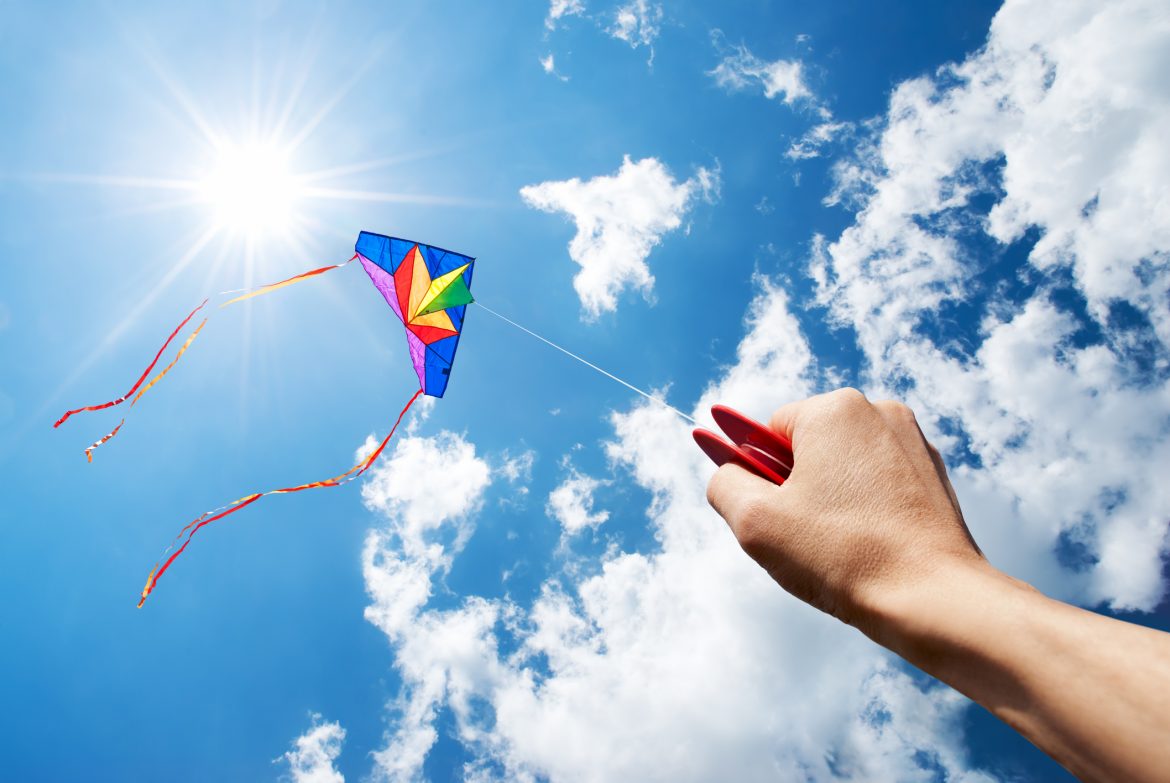 March traditionally can be quite windy in the Northeast, with large gusts blowing along the craggy and coved coast of Maine. However, that blustery wind made it ideal for kite flying and one breezy morning I asked my daughter if she’s like to learn how to make a kite. I had been doing some spring cleaning-out and discovered long dowels that would be perfect for a home-made one. My daughter discovered a roll of colored poster paper in her closet – just enough for the project. The kite would be electric pink, my young daughter’s favorite color at the time.

We laid everything we needed out on the kitchen table. She held things flat for me as I cut the shape out and used twine to tie the dowels together in the center of the kite as well as down to the edges of the crossed dowels. We found some ribbon for the tail, and I tied small bows on it to give it a little weight.  We were delighted to discover we had more than enough twine so the kite would fly up high, and my daughter found a nice small stick to wrap all that extra twine around.

When we were finishing up the kite, we heard a knock on the door and in came our best mother-and-daughter friends. After hugs, we showed them what we were up to and as it happened, there was enough left over to make a second kite.  My daughter’s friend was passionate about purple, and I found some wrapping paper which would work well. I was glad I hadn’t thrown that paper away during cleaning out. Putting this new kite together went a lot faster than the first one. And, after we’d finished and tidied up, my friend and I sat and enjoyed some hot tea while the girls ran outside to check the wind.

There was an open field not far behind our house that was perfect for kite flying. After a short while, the girls ran in, flushed and breathless. “There’s enough wind!” they announced. So, we finished our tea and out we went to the back porch and field beyond. The girls were right. There was a nice stiff breeze. My friend and I showed them how to run with the kite while letting out string to help it get aloft. The girls were eager to try and despite a few “Charlie Brown” crashes and the maintenance crew being called in a few times to fix things, they got the hang of it. There were shouts of joy and excitement as the little kites flew higher and higher. And the wind cooperated nicely – making the kites swoop and glide gracefully in the sky. There was high drama for a few seconds when the kites bumped into each other in the air. Thank goodness it was just a small bump and each kite swooped off in a different direction. Eventually it was time for the girls to reel them in and with the occasional strong gusts blowing, both were lifted off their feet for a moment or to. That resulted in shrieks of laughter and mock fear. It was such fun and we agreed we should meet at the neighborhood beach on the next nice sunny and windy day. The beach day was a great success too – the girls leapt and ran down the sandy shore with their kites tugging them along. Much to their delight a sea gull fluttered curiously near one of the kites, but he turned at the last moment and wheeled away. “I bet my pink kite scared him,” my daughter observed later on. “Maybe he thought it was a scary monster bird,” she added with a sly grin spread across her face.

When you think about it, it’s hard to believe that something as simple as a home-made kite could bring such pleasure, not to mention a lot of healthy running around outside. It worked well for the unpredictable month of March as you could never count on the weather here in Maine. It might rain or snow at any time, but then, every once in a while, you’d get those crystal days with freshening breezes. Those kites weren’t fancy by any means, and probably wouldn’t garner any trophies at a competition, but the fun and laughter were priceless and for two young girls, having their own unique kite meant more to them than having the same thing bought at a store.